A board game based on the “Spawn” comic book series sits in front of a row of square television sets at Second Life in Avondale Estates. Photo by Dan Whisenhunt

An old man wearing a ball cap flips through vinyl records. Not far from the records, there’s a wall of square television sets, like a display from an 80’s department store. Then there’s the “Spawn” board game, based on the Todd McFarlane comic book series, because why not?

There’s a line in front of the register. Behind the customers, hangers creak on the racks as shoppers, drawn by the allure of finding unexpected treasure, check the tags on the clothes.

Toby Tobias said it’s always like this at Second Life on “New Wardrobe Wednesday,” where everything is half off. The merchandise can be the stuff of legends. On Wednesday it was the “Spawn” board game. One time, it was vinyl collection of every Beatles’ album.

“We never know what we’re going to get,” Tobias said. 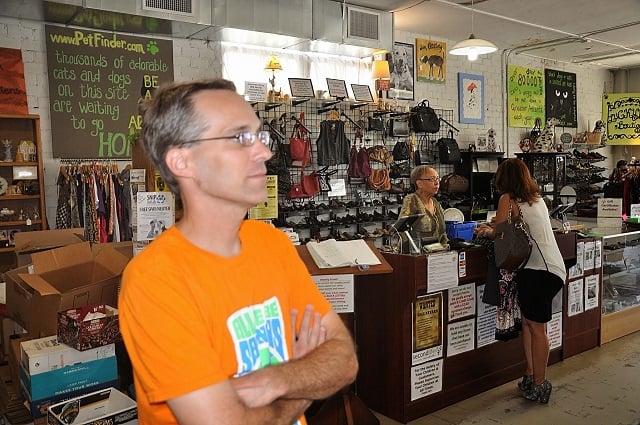 Second Life has occupied this space on North Clarendon Avenue since 2011, setting up a thrift shop in a building that served as an auction house and a plumbing supply company before that.  The business is actually a 501-c-3 established by Tobias and his wife, Tanya Mahrous. Since its founding, Second Life has donated $250,000 to animal-related charities.

The goodwill generated by the store’s pet-oriented mission has brought in some interesting items.

Phyllis Colmar, who also rescues dogs, bought some shorts and dog bowls, while throwing a little extra into the donation fund for animal groups.

“You can get designer clothes here for pennies on the dollar,” she said. 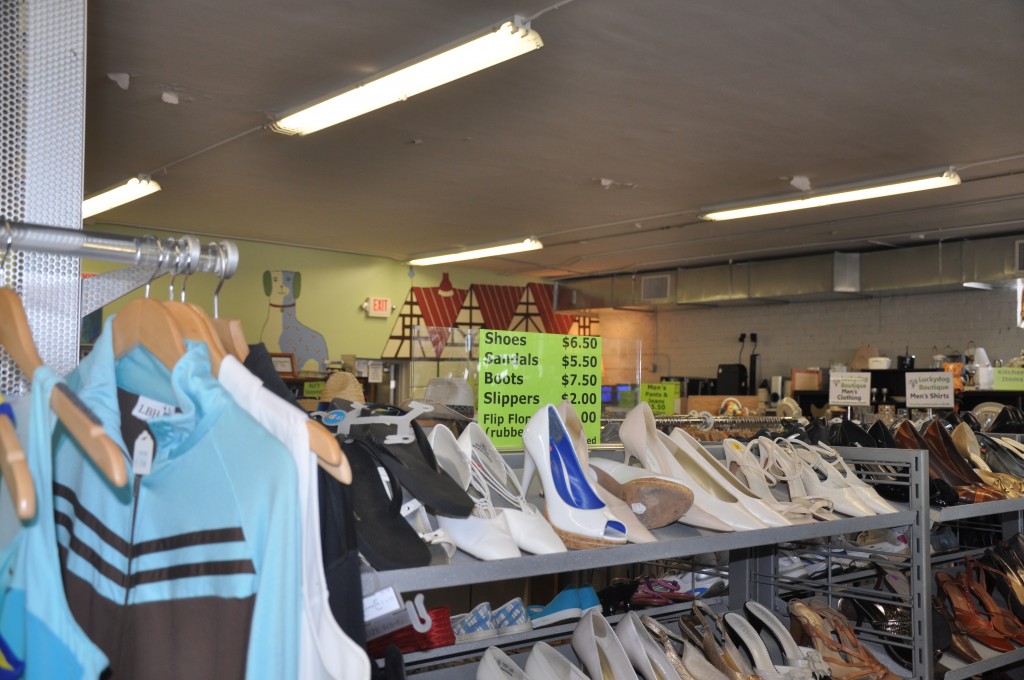 Tobias said the store also has a decent selection of men’s clothes, which can be harder to find at other thrift shops.

Tobias and Mahrous decided to start Second Life as they were reexamining their own lives. His wife worked at Delta airlines and he worked as a trainer in banking industry, “training tellers how to be tellers.”

They were in their late 30’s and ready to make a change. Tobias said they were visiting Mahrous’ hometown of Lincoln, Neb., for a high school reunion and her mom saw an ad in the paper for a thrift store that benefited the local Humane Society. They visited the store and when they returned to Atlanta, Mahrous’ couldn’t shake the idea.

Later Mahrous went back to Lincoln and spent a week at the thrift store, shadowing the owners and volunteering. Tobias said he and Mahrous spent a year coming up with a business plan, “which was actually pretty accurate.”

“Neither of us have any retail experience, so we didn’t know what we didn’t know. So we just came into this to try to make a difference,” he said.

Avondale Estates is changing. There’s now a record store across the street – Sunbrimmer Records – and vinyl collectors shop at both stores. Vacant spaces are starting to find new tenants, like Pallookaville and The Bishop.

With so much new businesses coming in, where does the thrift store fit? Tobias said Avondale is full of stores that give merchandise a second chance.

“I think we fit well with what’s going on,” he said. “You’ve got Finders Keepers right around the corner, some retail in this area, Kudzu (Antiques) is just down the road.” A kitten hangs out at the Second Life Thrift Store in Avondale Estates. Photo by Dan Whisenhunt

The Second Life store has even grown. Last November, Second Life moved into the empty building next door and used it to house furniture and art pieces. Second Life holds pet adoptions every second Saturday, but they keep foster animals on a regular basis.

Tobias said he’d like to see Second Life move into its own building. He’s thinking long term, too. He’d like for Second Life to be around after he’s gone.

If it keeps up its quirky mix of pets and offbeat products, it just might work out that way.

Richard Johnson, another customer who stopped by on Wednesday, said he’s a thrift store aficionado.

There’s something special about Second Life, he said.

“It’s more eclectic in terms of what they carry,” he said. “It has a different energy about it.”