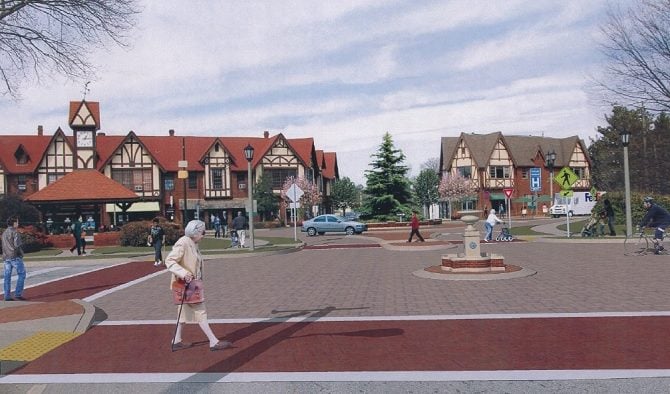 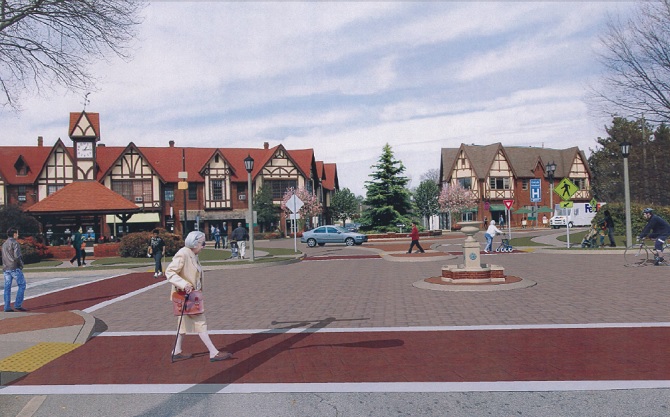 A concept drawing of what a roundabout would look like in ‘Avondale Estates. The illustration is contained in an application for grant funding submitted to the Atlanta Regional Commission.

Avondale Estates is considering several ways to calm traffic on U.S. 278, the city’s main thoroughfare, including a road diet and installing roundabouts.

During Wednesday’s work session for City Commissioners, City Planner Keri Stevens said that residents will be able to get a feel for how a roundabout would work on the congested road. Stevens said that in November there will be a public demonstration involving flags and other markers.

“It would show how you go into the roundabout to show how it would actually work,” Stevens said.

The demonstration is part of a $62,500 feasibility study funded mostly with grant money from the Atlanta Regional Commission.

But there was a word of caution from one of the members of the city’s Historic Preservation Commission.

David Sacks, the HPC vice chairman, warned that changing the structure of the road could also conflict with Avondale’s status as a Historic District. Sacks said the town’s layout was one of the many features considered when Avondale was added to the National Historic Register in 1986. He said it could disqualify the city from federal funding to pay for the roundabout.

“If the impacts on historic resources are such that the state historic preservation officer is not going to sign off on it, you’re disqualifying yourself from any funding,” he said. “It’s going to be a seven figure project.”

He encouraged the city’s commissioners to be more creative with their plans to improve the road “before we walk away from federal funding and do something that is contrary to the spirit of where we want to go as a city.”

During the work session, Stevens and Mayor Ed Rieker assured Sacks that the roundabout was just an idea, not a certainty.

“Let me just be clear from what I heard, is I didn’t hear anybody saying they were walking away from any federal or state funding,” Rieker said. “I think part of what they’re working on right now is to discover the impact of this to see whether or not that’s the case or not. I think we need to answer that question and see where that’s at, so we can have the full range of possibilities … I think the interesting thing for me about the test part, is we can test some stuff without spending really any money right now, and that’ll allow us to maybe guess at what might happen. I think everyone’s aware of the issues and I really appreciate you bringing those up, but I think to not find out what the impact is, whether or not we can get the GDOT money or not, I think we need to answer that question first.”

“Oh, absolutely, doing that study is the right thing,” Sacks replied. “The thing I was responding to was the city manager’s report … basically said the result of that study is going to tell us what our funding options are. I think if I were writing it, I would’ve said it’s going to tell us what our design options are. You may actually want to go and look at a different design option.”

“I think we will,” Rieker said. “I have no idea what a roundabout costs, but I’ve got to believe it’s a million plus, so if we don’t get funding for that, I’m going to guess that I’m not going to vote on spending a million bucks on a roundabout. Even if that was a solution, what I don’t know is if that’s really the solution.”