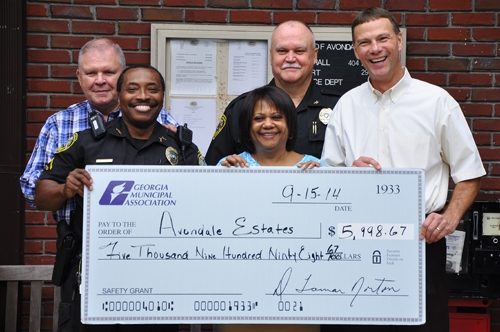 The city of Avondale Estates is the proud recipient of nearly $6,000 in grant money from the Georgia Municipal Association.

Avondale announced via its regular newsletter that the city has received a $5,998 GMA Safety and Liability Grant to buy safety vests for the city’s Police and Public Works Departments.

GMA reports that it has awarded $1.8 million of these grants to local governments in Georgia since starting the program back in 2000. The grants have paid for things like “bulletproof vests, training videos, confined space entry equipment, trenching equipment, reflective safety vests, fire department turnout gear, and police department in-vehicle video systems.”

This year the grants don’t require matching funds from recipients.

“As a result of this change from a matching grant to a non-matching grant program last year, interest in the program increased significantly,” GMA reports.

This isn’t the first time Avondale has received this particular grant. According to information published on the city’s website, Avondale also received the grant award in 2012.