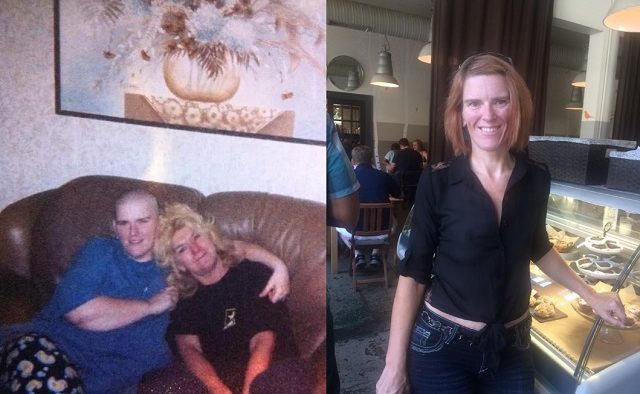 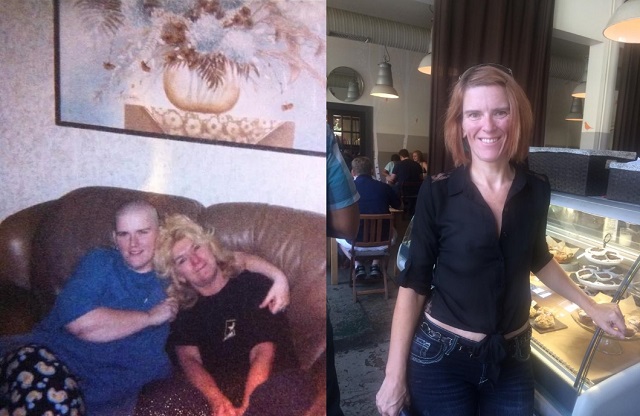 When Avondale Estates resident Saliena Guzman started her weight loss journey 10 years ago, she weighed nearly 400 pounds. Fast forward to 2014: the 39-year-old has lost 230 pounds and she’s training for her first marathon this November.

Guzman now regularly exercises six days a week, waking up at 4 am and working out until 7:30 am. She runs and bikes before her gym opens and then attends a spin class or lifts weights.

Her fitness success is making an impression on others. Lianne Horne, a Certified Personal Trainer with COREBODY Gym in Decatur, has trained Guzman on and off for about one and a half years.  “She inspires a lot of my clients that just see her and go ‘wow,’” said Horne. “I think Saliena has an incredible fire within her, and when she taps into that fire and uses it in a positive way to better her and to better her life, great things happen, and I’ve been witness to that ever since I met her.”

Figuring out how to tap into that fire didn’t come easy to Guzman. She had to fight some other serious battles even before dealing with her weight.

As a rebellious teenager, Guzman was bounced around between members of her family, before ending up in the custody of the state. Guzman said she would often sneak out of the foster home or group homes where she was staying, and one evening she found herself in a college dorm room in Savannah where she was raped by multiple men.

“I ended up walking back to the group home, and I took probably close to 400 or 500 aspirin and just took a shower and then laid down. And I remember waking up and they were pumping my stomach. And I just wanted to die,” she said.

The rape was reported to police, but Guzman doesn’t know if there was an investigation. She said she wanted to move on and left the group home soon after that.

Throughout her tumultuous childhood, Guzman said she always managed to maintain good grades in school. After attending Georgia Tech and majoring in computer science, she married and found food was a major focus in her relationship with her spouse at the time.

She ballooned from about 240 pounds to nearly 400 pounds. Because she and her spouse wanted to have children, Guzman knew she had to lose the weight. When her partner got gastric bypass surgery, Guzman followed suit, and she lost about 150 pounds as a result.

Around that time, Guzman’s mother developed ovarian cancer. She was only 48, but by the time she went to a doctor, the cancer was in its late stages. When her mother died in 2004, Guzman said she lost it. “When she was dying, I just didn’t get to say all those things, you know. I didn’t get to say, ‘I felt abandoned by you.’”

Her grief took a toll on her marriage, which ended within a year of her mother’s death. And those feelings of abandonment flooded back.

Guzman said she transferred her food addiction into an alcohol addiction as a way to cope. After being forced by Georgia’s DUI Court program to participate in Alcoholics Anonymous, Guzman sobered up and decided she wanted to stay sober after seeing how her relationship with her current husband, Jason, improved.

Guzman hadn’t had a drink in one and a half years when she and her husband joined COREBODY Gym. She weighed about 250 pounds. “I couldn’t have that same love affair with food that I had, and I couldn’t have it with alcohol, obviously, so I put a lot into working out,” she said.

Guzman was going to the gym twice a day, for up to four or five hours. Worried she had simply transferred addictions and was now approaching exercise in an unhealthy manner, she called her sponsor, who reassured her she would find balance.

And she found more than just balance. Guzman said she met people at the gym with whom she could identify. Between that and AA, Guzman said she felt she had found family.

Guzman is down to about 165 pounds, and she ran her first half marathon (13.1 miles) in March. She has also sought out races that benefit cancer research in honor of her mother. She competed in the Tri to Beat Cancer sprint triathlon this year and participated in Ovarian Cycle, a six hour spin class to raise money for ovarian cancer research.

The ovarian cancer fight became even more personal recently. On September 22, Guzman had her ovaries removed along with a hysterectomy after doctors determined she had genetic markers for ovarian cancer.

She’ll have to rest for three to six weeks post-surgery, but Guzman is hoping her doctors will clear her to run the Savannah Rock ‘n’ Roll Marathon in November. And she’s already signed up to do a Half Ironman Triathlon next March.

While her struggle with food and weight is ongoing, Guzman said the battle to stay sober is something she watches even more closely.