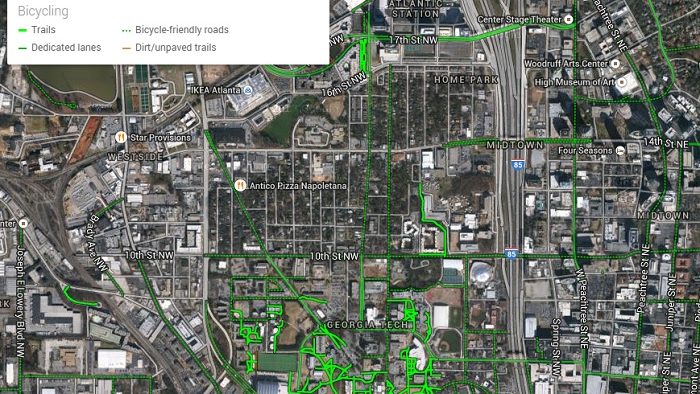 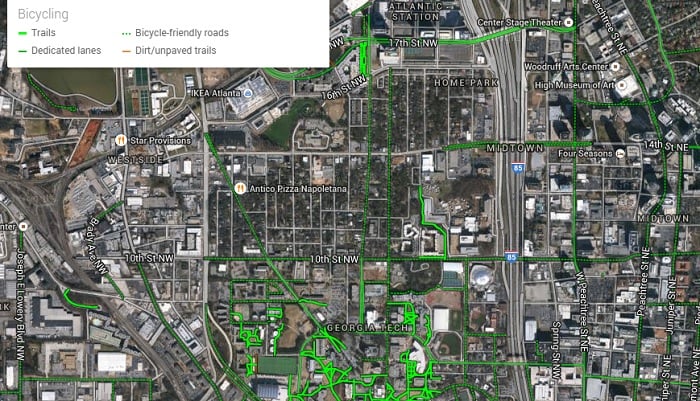 This Google Map shows some of the dedicated bike lanes and bike-friendly roads in Midtown Atlanta. Source: Google Maps

Construction is set to begin on a series of “high priority” bike lane projects that will change Midtown commutes for cyclists and drivers alike.

Dedicated bicycle lanes will be built or expanded along 5th Street, West Peachtree Street and parts of Peachtree Street south of the North Avenue MARTA station. High-traffic intersections will be reworked to make transits safer for cyclists.  Pavement will be patched and special “thermoplastic” barriers installed to protect bikers in heavy-traffic areas.

It’s all part of a larger plan to expand cycling facilities across the Atlanta metro Area, according to District 2 Councilman Kwanza Hall.

“Our aspirations are to take some pages out of some European cities and larger American cities, and offer a competitive experience, that our cyclists in town can enjoy,” he told Decaturish.

An avid cyclist himself, Hall sponsored a recent City Council resolution freeing up some of the $573,897 in previously-approved funds so that construction can begin on schedule, in early 2015.

– The heavily-used, pre-existing bicycle lanes on 5th street between GA Tech and residential areas in Midtown will be widened and repaved, and a protective barrier will be installed on the westbound portion of 5th Street between Spring Street and West Peachtree Street.

-West Peachtree Street’s existing bike lane will be widened and barriers installed along stretches of the road.

-A two-way cycle track will be constructed on 10th Street between Charles Allen Drive and Piedmont Avenue, meeting lanes that run along 10th from Charles Allen to Monroe Drive and connecting to the Atlanta Beltline East Trail.

To see the link to the city council resolution with the attached project descriptions, click here.

“Bike boxes” are a new feature planned for several key thoroughfares in Midtown.  But most Atlantans (like most Americans) have never used them.  Popular in Europe, these “bike boxes” provide a safe space for cyclists waiting at busy intersections.

For more information on how to use a Bike Box, check out this video:

“We’re a very car-dependent city and we’re playing catchup with cities that have stronger networks,” he said. “But we want to make it easier for folks on bicycles to get around town.  You start linking it all up and then you’re getting somewhere, people can get where they want to go.”

“Peachtree is one of these key streets,” she said. “It’s one of the only north-south connective streets that is really accessible by bike.  And Peachtree is where the action is. Bikeways on parallel streets are nice but even once they are installed, people will still need to ride on Peachtree to get to where they are going.”

Some commuters and residents are concerned that the new lanes will make traffic worse in Midtown.

Hall acknowledges that he’s heard complaints, but believes Atlantans will quickly get on-board.

“You feel that level of pushback until they start riding their bikes,” he said.  “All it takes is introducing and exposing our citizens to the benefits [the bike lanes] bring.  We are working to be considerate of all the user groups in the city. We are trying to engage everyone and have a win-win-win.”

Serna points to a recent survey of nearly 2,000 Midtown residents by Atlanta Bicycle Coalition, which found that 75 percent of total respondents agreed that bicycle projects should be a high priority for the neighborhood.  She also says bicycle lanes bring a net economic benefit.

“Many businesses throughout the U.S. have started taking notice of increased sales related to the installation of new bicycle infrastructure,” she said.  “In New York City and San Francisco, reports have indicated that businesses adjacent to new bicycle facilities have recorded increases in sales. Research has also shown that customers arriving at businesses by foot or on a bicycle spend more money over time than those who arrive by car.”

The projects are funded through a public-private partnership between Atlanta, GA Tech and the Midtown Business Association.  Construction should be completed by December 31, 2016.