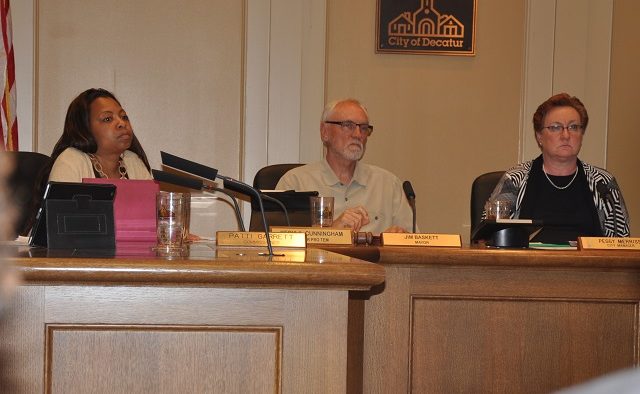 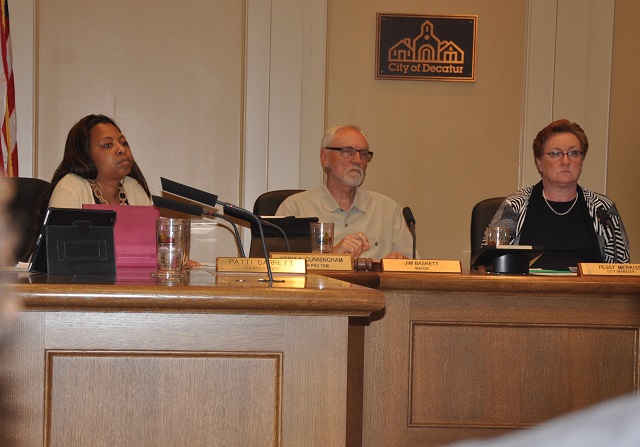 Decatur City Commissioners on Tuesday discussed how to deal with the state’s new gun law and tabled an item billed as a way to make the city more compassionate.

The two issues were not related, it should be noted.

Commissioners voted unanimously to create a “Facilities and Security Coordinator” position at an annual cost of $70,000, which includes salary, benefits and costs of professional affiliations. They also adopted a plan that would implement $175,000 worth of security upgrades to three city buildings: the public works department, the recreation center and city hall.

Assistant City Manager Andrea Arnold said a survey of city staff revealed security concerns that were there before the passage of the bill, however.

“What we learned through this process is there are a number of ongoing security needs even in the absence of HB 60 that need to be addressed by this position,” Arnold said.  “HB 60 adds another layer to what needs to be done.”

The facilities and security coordinator would “conduct physical security surveys of all of our buildings” and “make recommendations for facility improvements and upgrades,” Arnold said.

The position wouldn’t have to be a sworn police officer and would be under the supervision of the city manager.

Arnold said the security upgrades would be low-key steps to tighten up buildings without pulling up the “welcome” mat for the general public. It would involve things like panic buttons, extra cameras and bullet-proof glass, as opposed to metal detectors.

Commissioners had an easier time deciding how to react to the new gun law than deciding whether to award a contract to create a “Community Action Plan for a Compassionate Decatur.”

City staff had asked the commission to consider approving a $25,000 contract with The Art of Community, a consulting firm that would “build relationships and resources.”  Art of Community would “establish a steering committee, seek matching funds from foundation and community partners, and collaborate with a steering committee to create a dialogue process in order to officially launch the initiative in January 2015.” The total cost of the project could rise to $100,000, with the inclusion of grants, donations and in-kind services.

Mayor Jim Baskett said the proposed contract was in response to concerns about racial profiling raised by the Decatur Community Coalition.  It was not required when the city of Decatur signed a “Charter for Compassion” in April, a symbolic gesture made by city officials. He said invoking the charter was a way to show the city intended to act on those ideas.

“We told (the Community Coalition) we want to engage in a city-wide conversation,” Baskett said. “We saw their issue as a part of that, but we saw and heard from a lot of places it should be broader than that.”

Commissioners Scott Drake and Fred Boykin put the brakes on awarding the contract, mainly because they weren’t sure what the city would be paying for or why only one company is being considered. The Art of Community wasn’t selected through a request for proposal or bid process.

Arnold, the assistant city manager, told Decaturish this would be considered a professional service under city rules and exempted from any bidding requirements.

City Manager Peggy Merriss said the proposal needed to be in place to position the city for grant opportunities.

“We might lose out on some grant money,” Drake said. “That’s always the case. If we do it right, those things will be there the next time.”

Boykin said he was uncomfortable making that kind of commitment without having enough time to study the proposal.

“We didn’t bid it or anything like that,” he said. “We didn’t ask for anyone to give us any proposals. To just pick somebody … I’m a little concerned and I’m not sure I know where we’re going to go.”

Decatur City Commissioner Kecia Cunningham said a delay might just be kicking the can on the issue. She said the issue of diversity in the city is one that’s been raised numerous times over the 14 years she has served as a commissioner.

“Personally I’m kind of tired of us just yammering,” she said.

In the end, Drake and Boykin convinced their fellow commissioners to vote unanimously to table consideration of the contract until a meeting in October.

Cunningham said that even discussing the topic was worthwhile. She pointed to the recent controversy in Ferguson, Mo., surrounding the shooting of an unarmed black teenager by a white police officer.

Former City Schools of Decatur Board of Education member Don Denard, who started the discussion about racial profiling in January after relaying an encounter he had with Decatur Police, also attended Tuesday’s meeting. He promised that the Community Coalition would provide a formal response to how the city intends to address concerns the Coalition raised.

Denard thanked city leaders for their response to those concerns.

“This is not Ferguson and it’s never going to be Ferguson,” Denard said.