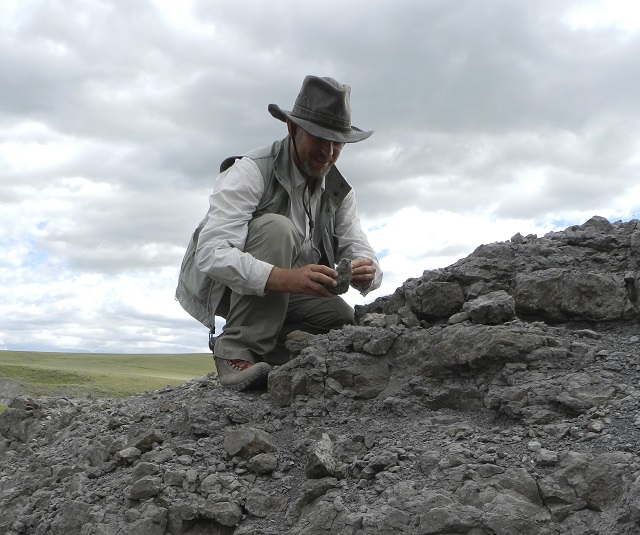 Decatur’s resident paleontologist sees no reason why people shouldn’t have a lot of fun while learning about dinosaurs and the clues they’ve left behind.

Anthony Martin, or Tony as he likes to be called, is a professor of practice in Emory University’s Department of Environmental Sciences. He holds several other titles as well – geologist, paleontologist, and ichnologist.

“Ichnology is the study of traces: tracks, trails, burrows, nests, and any traces that animals or plants have left, which sometimes preserve in the fossil record,” said Martin. “Ichnology is a science a lot of people don’t know the name for it, but might intrinsically know it through watching, say, TV shows that show forensics, or they might see some of these old movies that show a native American scout examining the ground. So they have these ideas, these concepts of how we can interpret all of these clues and traces left by animals in our everyday lives.”

That is why Martin wanted to write his most recent book, “Dinosaurs Without Bones: Dinosaur Lives Revealed by their Trace Fossils.”

“People may not be aware of this deep time aspect of traces – how traces actually extend back more than 500 million years into the geologic record, and I thought dinosaurs would be the best way to tell people about how you can study ichnology,” he said.

Martin started with the premise that if all of the dinosaur bones disappeared, how would people know dinosaurs existed? He said that dinosaur tracks like nests, tooth marks, feces, and even dinosaur urination marks are the real fossil records and tell a much bigger story than the bones alone.

Martin likes to point out his work is not all dry science measurements and statistics. “Imagination comes into play when I start asking myself, ‘What was that dinosaur doing? What was it feeling at the time? How was it acting as part of its environment?’ That this wasn’t some robot just walking mindlessly through the landscape – it was interacting with that landscape and it was interacting with plants and animals that were in that area,” Martin said.

He excitedly demonstrates this with an illustration of a huge dinosaur projectile vomiting that he created for his book. Martin said he had a lot of fun collaborating with an Emory physicist to determine the height, volume, and weight of the vomit and how it would crush smaller dinosaurs.

Martin’s desire to bring the enjoyable aspects of science to the masses is also evident in his blog, Georgia Life Traces, which can be found on the website for his book, Life Traces of the Georgia Coast. In addition to more serious studies, Martin uses the blog to take a look at how science is represented in popular culture. This includes posts like “The Ichnology of Godzilla” and “The Ichnology of Jurassic Park,” a movie he says all paleontologists get asked about.

The geologist is also active on Twitter and encourages his students to follow him so they’ll know what to expect in class. His Twitter handle is, appropriately, @Ichnologist.

He even used Twitter to point out an error in The Washington Post’s September article about the giant swimming dinosaur Spinosaurus. The article stated, “until now, scientists didn’t have any proof that there were swimming dinosaurs.” Martin said that’s simply not true – scientists have seen evidence of thousands of dinosaur swim tracks (where a dinosaur is touching its toes on the bottom of a lake or stream) in Utah, China, Australia, and Spain.

“So, what the writer probably should have said would have been, this is the first time we’ve seen it from a skeleton,” Martin explained. He pointed out that the new research shows that the Spinosaurus has all the adaptations for possibly being semi-aquatic, which is groundbreaking, but other dinosaurs were likely capable of swimming if they needed to – sort of like a grizzly bear, as he described it.

Martin was a co-discoverer of the first known burrowing dinosaur, called Oryctodromeus cubicularis. Martin, David Varricchio and Yoshihiro Katsura wrote a paper that was published in 2007 about finding the adult dinosaur and two juveniles in a burrow in Montana. Martin described that experience as being “like Christmas, on your birthday, on a holiday!”

He’s enjoying the opportunity to share experiences like that with the community, including speaking at this year’s AJC Decatur Book Festival and regularly talking at the Fernbank Museum. “It’s great to give back to my local community of Decatur in that way,” he said.

While dinosaur bones in Georgia are quite rare, Martin said anyone can be an ichnologist in their own backyard. He said birds are a great subject, because they shared a common ancestor with dinosaurs.

Martin said on a simple walk from his home to downtown Decatur he will see animal traces that tell many stories.

“All you have to do is open your eyes and start seeing these traces everywhere that animals are leaving of their presence and telling you about their lives and their behavior all around you. It’s this unseen world that you can start seeing,” he said.