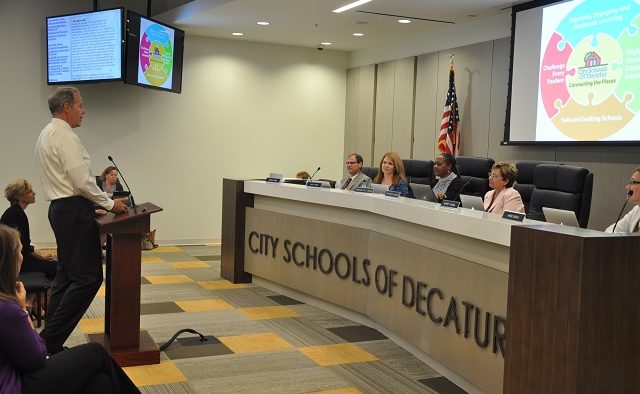 Dan Weber speaks to City Schools of Decatur Board of Education members on Sept. 8. Photo by Dan Whisenhunt
Share 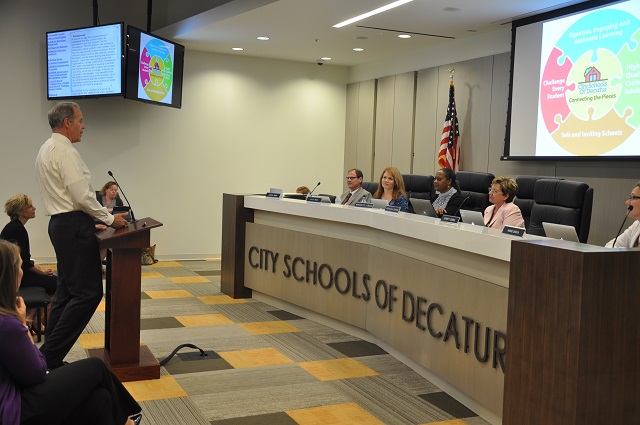 Dan Weber speaks to City Schools of Decatur Board of Education members on Sept. 8. Photo by Dan Whisenhunt

City Schools of Decatur Board of Education members on Sept. 9 voted to join a nonprofit that lobbies for charter school systems.

A year ago the school board rejected a request from Superintendent Phyllis Edwards to join the Charter System Foundation, created by ex-state senator Dan Weber. The organization lobbies for Charter School Systems and also provides professional development for school superintendents. The organization has also been criticized because Weber was the sponsor of the bill to create charter systems, according to the Atlanta Journal Constitution.

When the school board rejected the request a year ago, members were wary of joining an organization that was separate from the Georgia School Boards Association. On Sept. 9, they voted unanimously to join the organization at a cost of $8,000 per year, but didn’t express enthusiastic support for the idea. Edwards said CSD needs to be a part of this organization to have a voice when the Legislature deals with issues that affect charter systems. She said the flexibility that charter schools provide schools is often overruled by state mandates on things like teacher evaluations.

Board member Garrett Goebel, who couldn’t make a Sept. 8 work session where the BOE interviewed Weber, asked why his fellow board members had a change of heart about joining Weber’s foundation.

Board member Julie Rhame said the school system needs a stronger voice in these issues.

“The reality is that our capitol is filled with people that make laws that the Republicans are in the majority and this particular person can maneuver things, because he’s been there and he can get results,” Rhame said.

Bernadette Seals also voted against it the last time Edwards made the request. She said she was initially worried that Fulton County Schools, which is also a member and the biggest system to join, would be the primary driver of the foundation’s agenda. Seals said that since the organization started, she hasn’t found that to be the case.

“The charter foundation is the foundation that gets groups of superintendents together in front of legislators,” Seals said. “They have a collective voice.”

Goebel voted with the rest of the board members, but it didn’t exactly get his ringing endorsement.

“What I’m hearing is, in many ways, is compromise is part of getting the job done, sometimes you compromise and you go take a shower and you get back to work,” he said before his vote. After the vote, he said, “I hear what you all are saying. I think maybe I just need to take a shower after this meeting.”

During his Sept. 8 presentation to the board, Weber told the board he could put CSD and other charter systems int he same room with legislators who are making decisions that will affect them. He said there are bills being discussed that Decatur should be paying attention to.

“There has been legislation on the table in the house over the last few years to change what it means to be a charter system,” he said.

During the presentation, Weber said the Charter System Foundation’s budget is about $140,000, most of which goes to compensating Weber and Executive Assistant Pam Tallmadge

Decaturish asked Edwards about the criticism of Weber for forming this group after sponsoring the charter system legislation. Did it give her any pause about working with the Charter System Foundation?

“I can’t speak to that,” Edwards said. “I know that this is a group of superintendents that are doing the same things we’re doing.”