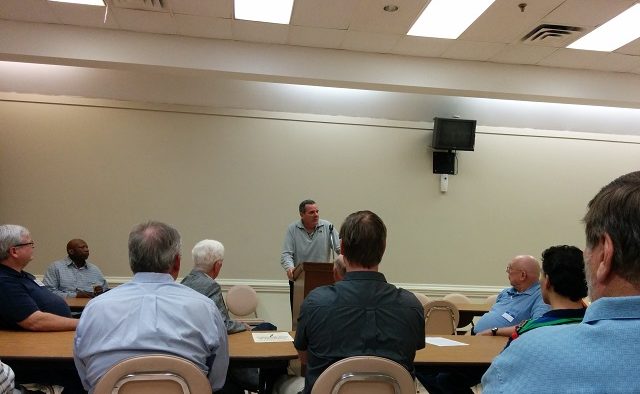 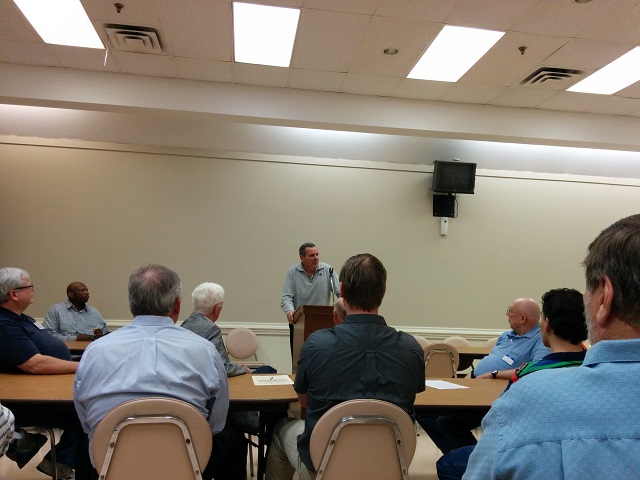 The owner of Your DeKalb Farmers Market made a rare public appearance on Wednesday and told the Avondale Estates Men’s Club that he’d rather stay in the county than join the city of Avondale.

After the meeting, DFM owner Robert Blazer said if he’s forced to make a choice, he’d rather be part of a proposed city of Briarcliff. He also made Decaturish aware of a petition circulating among people who own property around Rio Circle, another property that Avondale wants to annex. The petition, if approved, would allow those owners to annex into Decatur.

Blazer spoke at the American Legion Post and his appearance was a bit of a surprise. Blazer shuns media interviews and doesn’t like being photographed. But for nearly an hour he spoke about how he started the Farmers Market, his plans for expanding it and his personal philosophy about how the world should generally operate.

Decaturish wanted to know what he thought about being on Avondale Estates’ annexation map. Blazer said he’s not really a fan of annexation, because it’s a sign that people can’t cooperate, which he believes has made DFM successful.

Blazer spoke to reporters after the meeting. He said he has been approached by officials in Avondale Estates, Decatur and parties looking to form a new north DeKalb city, previously known as Briarcliff. Briarcliff is supposed to be working with Lakeside on a collaborative proposal to create one large city. Blazer said the idea of joining a larger community appeals to him.

“I’d like to be part of the biggest one I could be a part of,” Blazer said. “”Because I’d like the market’s revenue go the biggest area.”

He said he wants to be part of a city that is taking in a large number of residences as opposed to joining a city that just wants DFM’s tax revenue. DFM is undergoing an expansion at the moment.

When everything is done, there will be more than a million square feet of additional space, 2,800 more parking spaces and two new driveways: one on Ponce De Leon and one on DeKalb Industrial Way.

During the interview after his presentation, Blazer mentioned that property owners around Rio Circle are signing a petition to become a part of Decatur. Blazer hasn’t signed it.

Currently, the area is identified in an annexation map that was included in a bill filed by Avondale Estates Rep. Karla Drenner during the 2014 Legislative Session. The bill did not pass. The map attached to the bill included the residential areas of the Forrest Hills neighborhood and homes on Katie Kerr.

That bill, which would’ve called for a public vote on the annexation plan, has come under fire recently by residents in Avondale who said they didn’t know anything about it. Drenner told Decaturish that she filed it at the request of Avondale Estates Mayor Ed Rieker and Commissioner Lindsay Forlines.

Drenner said she has no intention of introducing this bill again unless she is positive it’s what residents want.

“I don’t go out looking for annexation opportunities,” Drenner said. “My feelings haven’t changed about protecting the existing cities.  … I’m going to need about 100 people to call me.”

Property owners around Rio Circle who signed the petition said they aren’t interested in joining Avondale because they feel like the city has struggled to make progress over the years.

“We just think Decatur has had it going on for 20 years and Avondale is still catching up,” he said.

It currently has the signatures of 41 out of 54 private property owners.

Like Blazer, Campbell said the property owners would rather stay in DeKalb County where their property taxes would be lower, but they don’t think that will be an option under the circumstances.

Campbell said one of the property owners behind the petition has been in communication with city of Decatur officials, but it’s unclear where those talks stand at the moment.

Decatur is in the process of revising its annexation master plan. If Decatur decides to consider annexing property around Rio Circle, it will be of interest to residents of Forrest Hills and Katie Kerr. Those residents are being told they don’t have the option of annexing into Decatur because they are not on Decatur’s master annexation plan.

Neither is Rio Circle, but that hasn’t stopped Campbell and other property owners from asking about the possibility of joining Decatur.

“It seems like we don’t have a choice and it seems like there are other cities making the choices for the people whom they represent in particular areas,” Campbell said. “Avondale wants this side of the street, Decatur wants that side of the street. They didn’t ask any of us what we wanted. So, we figured we might have a voice, too.”