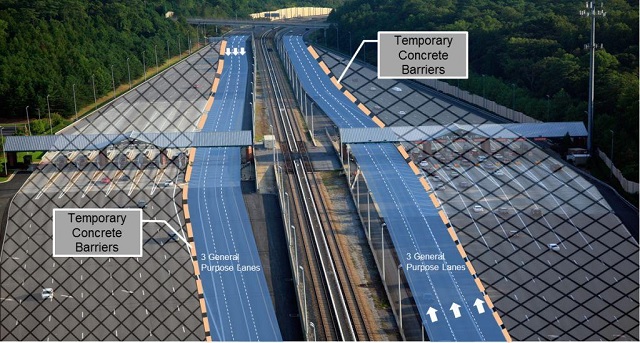 A photo from Georgiatolls.com that shows the location of temporary concrete barriers along GA 400.
Share

A photo from Georgiatolls.com that shows the location of temporary concrete barriers along GA 400.

It’s been almost a year since the state of Georgia stopped charging drivers to cross Georgia 400 and since that time Georgia Department of Transportation crews have been working to make the road look like other state highways.

This weekend, GDOT will be taking an important final step in the process.

The Transportation Department said that the toll plaza area, just north of the Lenox Road interchange, will shift to its final lane configuration.

There will be three travel lanes in each direction.

“The lanes will be located on the inside (left) area of the roadway, that section formerly used by vehicles with Cruise Cards,” the announcement from GDOT says.

The Transportation Department says the lane shift will take place over two nights. Northbound traffic will be shifted starting at 10 pm on Friday, Sept. 5. Work will continue into Saturday morning. Then at 10 pm Saturday, Sept. 6, work will begin on the southbound lane.

“Motorists should slow down and proceed through the areas with extreme caution while the shift is taking place; delays are likely,” the announcement from GDOT says. “In addition, they should continue to drive through the area carefully once the shift is complete as work will be ongoing to remove the unnecessary pavement to the right of the lanes.”

The closure of the GA 400 tolls had political implications. Tolls were originally set to end in 2011, but the deadline was extended. Gov. Nathan Deal reversed that decision shortly before a 2012 referendum that would’ve imposed a 1-cent sales tax to pay for transportation improvements. That sales tax was overwhelmingly defeated by voters. The tolls closed, as promised, in November 2013.