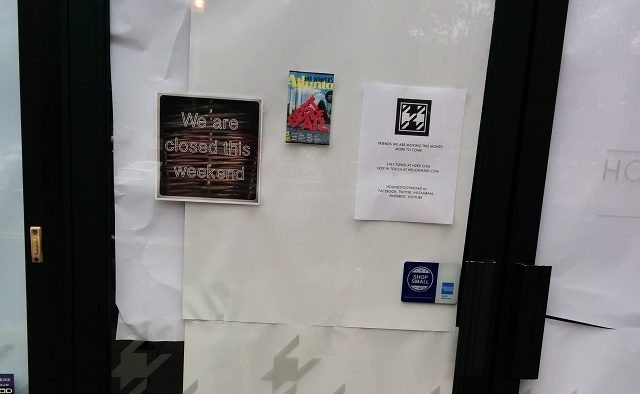 The sign on the door of Houndstooth Road in downtown Decatur, Ga. Photo by Dan Whisenhunt
Share

The shop was closed this weekend and has a note on the door that says, “Friends we are moving this month, more to come.”

Owner Jae Schmidt told Decaturish that the overhead at the Church Street location “just doesn’t work for us.”

“Independent retail in embattled and the bicycle industry overall has had a challenged year,” Schmidt said. “We have had some vendors lose their US importers, distributor mergers, and volatile international currencies. We have an amazingly loyal customer base across the southeast, so our options are broad.”

There’s no word on where the business will be moving. Houndstooth was founded in 2010, and opened in Decatur in 2012. It has developed a niche clientele and organized regular “Tweed and Vintage” rides in the city.