Intersections – Putting on My Cape

Intersections – Putting on My Cape 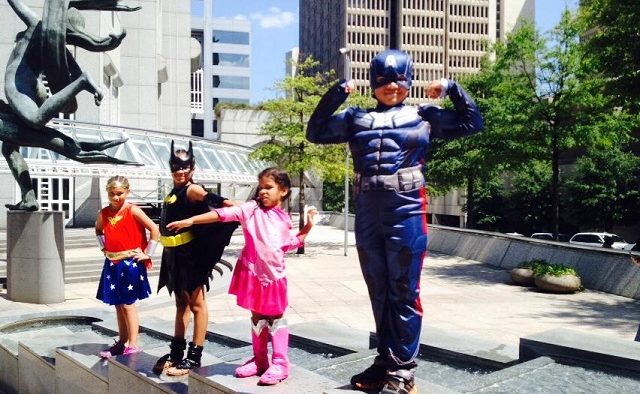 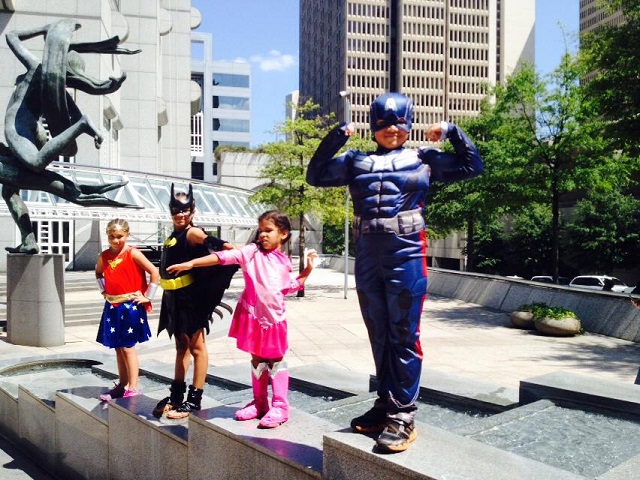 My first and last TV appearance occurred when I was four years old. Mister Rogers was filming a special about superheroes, and he interviewed Lou Ferrigno and Bill Bixby about the TV show, “The Incredible Hulk.” The film crew recorded the kids’ playground antics at my daycare. We were the superhero generation. My 15 seconds of fame happened as I ran around with my hooded sweatshirt for a cape. A boy pushed me down, but I popped up right away, undaunted.

My first hero was Wonder Woman. The day we left Connecticut bound for Georgia, Wonder Woman was on my chest. It was a pale blue shirt with a glossy iron-on of red, gold, and royal blue. She was a pilot, a leader, and a seeker of truth. I never stopped wanting to be those things I thought I could be at age four.

By the time I got to junior high, there was a poster of Spider-Man on my wall. My sisters regularly bought me comics. I remember the first time I saw Storm. She was earth and wind, without the fire. But she had friends who could blaze.

Even though I am grown, I enjoy the days before Labor Day and the chance to put on my cape again. When Dragon*Con comes to town, Atlanta does not just become hot, it becomes super. A couple of years ago, I had my second chance to be on TV. A documentary filmmaker stopped me and asked why I had my kids at Dragon*Con.

I didn’t tell him the truth.

I told him that it was good for them and their creativity. Maybe that was part of the truth, but it was still more lie than truth. We’d been having a tough year. There are things in life outside our control that bring us down, and not suddenly down, but just piece by piece slower and sadder. One day my second daughter asked me why I decided to be a mom.

“It looks like a lot of hard work,” she said, eyeing the dishes, the laundry, the stacks of unopened mail, and the shoes on the floor. “Being a grown-up doesn’t seem fun,” she added.

I may be the world’s worst Tooth Fairy, but I do periodically know how to have fun.

“Being an adult is hard work, but when you grow up you can do anything you want. First you work. Then you play.” And I hatched a plan to take them downtown to Dragon*Con. The baby was nine months old. The older kids were unsure of the MARTA ride and the costumed figures haunting the train. They weren’t sure if we should ask to take pictures with the storm troopers, but we did anyway.

Why has Valentine’s Day and Halloween and birthdays and everything turned into a holiday for kids with nothing left for the adults? I love Dragon*Con. I love the smiles and hugs and sweaty embraces from strangers.

“Those adults,” I said as we walked away from the storm troopers, “they are having fun.”

I am not Superwoman. I will never have it all. I will never want it all. I have enough, but some days I really need all my superpowers. I get pushed down. I put on my cape and stand up again. I can still run in bionic slow motion. I know now that being amazing or incredible only means you have more villains to defeat.

Some days you have to put on a costume and save the world. My kids like getting dressed up now. As we left Atlanta on Friday evening a mom dressed as Wonder Woman waved to us in the MARTA station. She was fully costumed in her super heroine swimsuit with cape. Her daughter was Batgirl. I had one of those too. She rushed our way, and we took a picture. Strangers feeling super. Oh, man, we were smiling. We all know how to have fun.

Maybe it is my imagination, but I swear my kids (and all those adults downtown in costumes) act better on the days they put on a cape. This year we adopted a new motto: The only way to become super, is to act super. This isn’t advice for my kids. It’s advice for myself. Let’s see if it works.