Owners of 41 out of 54 properties prefer Decatur

Owners of 41 out of 54 properties prefer Decatur

According to a copy of the petition Decaturish obtained via open records request, it has the signatures of owners representing 40 properties out of 54. The petition organizer, Decatur Self Storage owner Mike Easterwood, said he recently acquired a signature for the 41st property, meaning the owners of more than 74 percent of these parcels want to join Decatur. It’s land that’s currently being sought by the city of Avondale Estates.

Here is the petition submitted to the city of Decatur. (Click on each image to enlarge.) 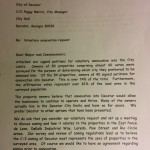 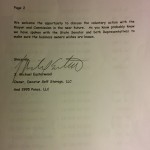 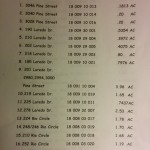 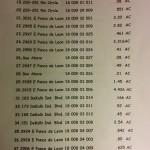 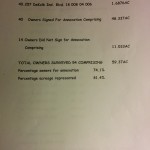 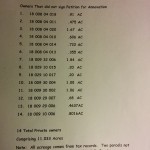 The properties in question account for about 60 acres in an annexation bill filed by state Rep. Karla Drenner back in March.

Easterwood said he and other property owners didn’t know about the bill until three days before the session ended. The bill ultimately failed. Drenner has said she won’t introduce a bill unless it has the support of these property owners and residents. Easterwood said Avondale Estates officials didn’t approach the petitioners about whether they’d like to be included in Drenner’s bill. That’s when the property owners decided to act on their own in case a similar bill gets introduced in 2015.

Easterwood said Avondale tried to annex those same properties several years ago, but the property owners were successful in their fight to stay in unincorporated DeKalb County. With new cities potentially forming next year, staying unincorporated may not be an option.

“We’ve had it on our radar ever since,” Easterwood said. “We know they’re after us. We’ve got to organize. A lot of people don’t want to do the dirty work. I’m doing it. I’ve got a lot of acres over here. I don’t want it screwed up.”

DeKalb County Farmers Market owner Robert Blazer, who would also be affected by the annexation petition, said he won’t sign it. He wants to join Briarcliff, one of the new cities that’s being proposed.

Easterwood said he spoke to Decatur City Manager Peggy Merriss on Monday. Merriss told him that the city isn’t going to fight Avondale over the properties. He thinks he can muster enough political support on the City Commission to approve the annexation petition. The cities’ annexation plans have become an awkward dance between Decatur and Avondale Estates, one that Easterwood doesn’t fully understand.

“They seem to be very nervous about telling Avondale they want us, for some reason,” Easterwood said. “I think they do want us. The interesting thing is, the other people who have gone to them asking for information about annexation, they’ve told them no. They’ve just said no. Well, they didn’t tell us that. They didn’t say no. We pressed the issue a little bit. Do you have a written agreement (with Avondale)? They do not. There is no agreement other than somebody in the backroom saying, ‘you can take that and I’ll take this.'”

Those “other people” Easterwood was referring to are representatives of the neighborhoods of Medlock Park and Forrest Hills. Anyone can petition the city using the 60 percent method, which requires petitioners to get the signatures representing 60 percent of land owners and registered voters. The City Commission then votes on the petition.

We asked Mayor Jim Baskett if the city was discouraging residential owners from using the petitioning process. He said the city isn’t, and said Clairmont Heights is currently pursuing annexation using the 60 percent method.

Easterwood said Avondale doesn’t have a “rational land use plan,” which could hurt his property values.

“I appraise commercial real estate,” he said. “I’m very interested in the rules associated with land use about how they affect the value of property, and also I know some people who have businesses over there. I think they are not a very friendly place for people in businesses. They keep saying they are, but I just haven’t noticed it.”

Being business friendly has been one of the key talking points of Avondale Estates Mayor Ed Rieker. The city has taken over permitting functions from DeKalb County in an attempt to streamline that process. There’ve also been new businesses opening in the city’s downtown. Euramex Management currently has the 13-acre Fenner Dunlop property under contract, with plans to turn it into a mixed use development.

Rieker has also run into some trouble of late. Some residents are just now learning about the annexation bill that Drenner filed. There’ve been allegations that Rieker and the city haven’t been transparent. In addition to Easterwood not knowing about the bill, many Avondale residents didn’t know about it either, which led to a tense meeting on Sept. 22. That led to a special called work session on Oct. 1.

The annexation discussion has heated up in recent weeks, generating passionate debate and conflicting information.

There’s a Nov. 15 deadline in place for new cities to present their maps to the General Assembly for consideration. State Rep. Mike Jacobs, R-Brookhaven, said while that deadline technically applies to the proposed cities of Lakeside, Briarcliff and Tucker, that deadline is driving the annexation discussion in Decatur and Avondale Estates.

“If you start setting deadlines for the big new city proposals, obviously there is a trickledown effect that prompts some activity by the existing municipalities,” he said. “I would much prefer that everyone put their cards on the table than the General Assembly be forced to take another ride on the DeKalb cityhood merry-go-round for the 2015 legislative session. We need to know where we stand.”