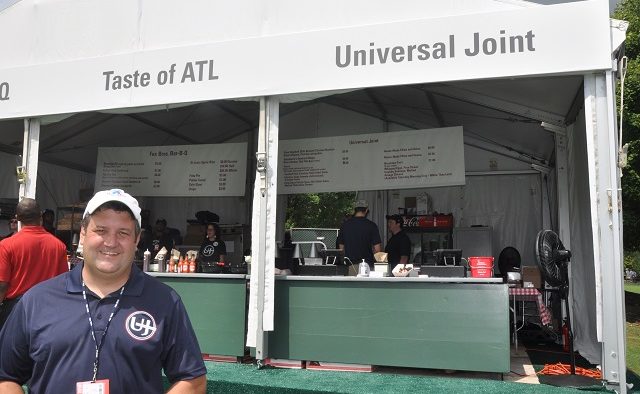 Universal Joint owner Marc Brennan stands in front of the vendor tent at the PGA tour in East Lake.
Share 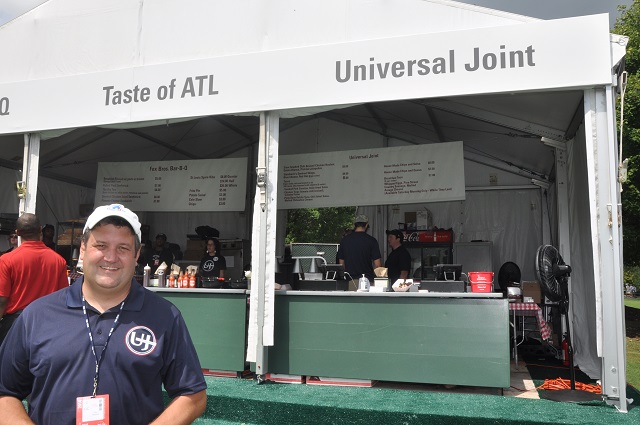 Universal Joint owner Marc Brennan stands in front of the vendor tent at the PGA tour in East Lake.

Two local restaurants are making history during the PGA Tour Championship this week.

Universal Joint and Fox Brothers Barbecue were selected to be the first local restaurants to serve food at the tour as part of a new feature: the Taste of Atlanta.

At noon, the spectators were milling about the East Lake Golf Club, some drinking whiskey and smoking cigars, others looking for a place to hide from the sun. The Universal Joint – Fox Brothers tent is located over by the driving range. Prep work began at 8 am, an employee at the counter said.

Universal Joint, an Oakhurst mainstay known for burgers, is serving tacos at the request of PGA officials.  U-Joint is also serving smoked wings.

Brennan didn’t mind accommodating tour officials, many of whom eat at his restaurant when the tour is in town.

“It’s a great marketing experience for us,” Brennan said.

So how’d they get the invite? Brennan said in addition to being friendly with PGA officials, for years he’s been donating food to the tent that the tour provides to members of the U.S. Military so they can eat for free. The PGA didn’t forget the gesture, he said.

Universal Joint and Fox Brothers will be on the menu every day of this year’s tour, which ends Sept. 14.