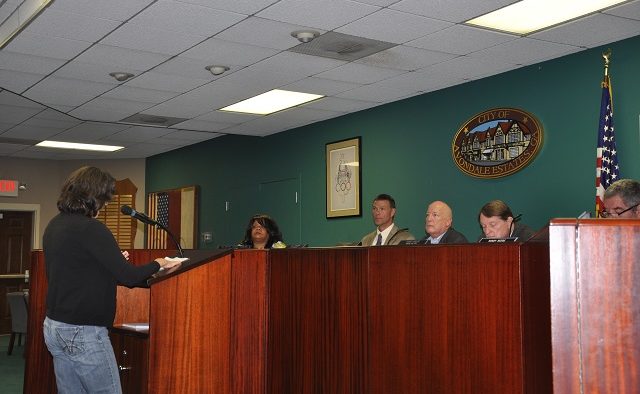 Avondale Estates Mayor Ed Rieker apologized to residents and promised to hold a public conversation about the city’s annexation plans.

Residents showed up in force at the Sept. 22 City Commission meeting, which rarely draws a crowd because most of the city’s business is discussed during the work session held the previous week.

The news that Rieker has been meeting personally with residents of the Forrest Hills neighborhood about joining the city has taken many Avondale residents by surprise. Residents also learned that Rieker and Avondale Estates City Commissioner Lindsay Forlines visited the DeKalb legislative delegation and presented the city’s annexation plan, according to state Rep. Karla Drenner. Drenner told Decaturish that she later filed a bill that included Forrest Hills, based on that presentation.

Forlines was not at the meeting because she was ill, commissioners said. When questioned directly by a resident about which Avondale officials approached Drenner about the bill, Rieker deferred to Drenner.

“I think you’ll have to ask Karla that,” Rieker said. “She’s the one that wrote the law.”

When the resident pressed him on that point again, Rieker said, “I appreciate your question. I think I’ve answered it a few times.”

After residents grilled Rieker over annexation and other city issues that were ticking them off, Rieker promised to hold a special work session to discuss expanding the city’s boundaries. A date has not been announced. The mayor later apologized after one man told him, “If this had gone through we’d have been hit. We’d have all this area around us all of a sudden.”

“I’m not perfect,” Rieker said. “I apologize if I’ve let you down. It’s not my intent. I’m trying to do the best I can do. I’m sorry you’re disappointed in what you’re seeing and what you’re hearing, so I’ll try to do a better job.”

Avondale residents had exchanged emails all weekend, trading information and trying to piece together exactly what the city has been doing regarding annexation.

Resident Lisa Shortell spoke during the meeting, telling commissioners, “This lack of transparency is unacceptable.”

Shortell said when she first heard about the annexation plans about Forrest Hills, she tried to understand why city officials didn’t discuss it with the residents.