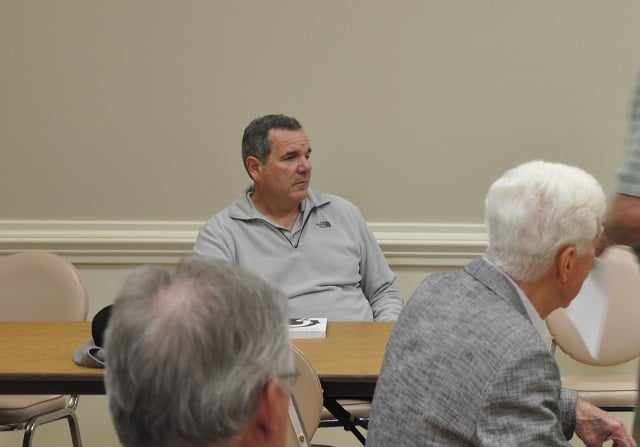 The owner of Your DeKalb Farmers Market has always been a hard man to reach.

Robert Blazer has operated the market for almost 30 years, a business that now brings thousands of people to DeKalb County every week. Blazer is wary of the media. When news about Blazer’s plans to expand the Market by more than a million square feet became public, he wasn’t available for interviews. In 2012, Creative Loafing published a lengthy profile of him and the business located on East Ponce de Leon just outside of Decatur, but he declined to be photographed.

The Avondale Estates Men’s Club announced that the speaker at its Sept. 24 meeting would be DFM Assistant Manager Frank Velasquez and he would talk about the expansion plans. Decaturish and a reporter from the Atlanta Journal Constitution showed up, looking for a scoop.

Blazer scooped everyone, showing up in person to talk about the market expansion and also his personal operating philosophy, which he has enshrined in a book titled “Our World Market.” It costs $10 and copies are available at the DFM customer service desk.

“I built (the market) back in 84, 85 … we opened it in 86, and we had a lot of land we were able to purchase at the time with the market, and out of that it gave us an opportunity for future growth,” Blazer said. “So we’ve been through a lot over the years to be able to do what we do, and it’s taken a long time to get to the point where we consider it to be prudent, really, to expand the market.”

Seeing Blazer outside of the Farmers Market was like bumping into the Wizard outside of Oz. Many people have never laid eyes on the man, who speaks in a quiet New England accent and often looked down while speaking to the group of 20 people who attended his presentation. As noted in the CL article, Blazer’s office is perched above the market where he can see what’s happening through large windows. He’ll quietly mingle with his customers, but doesn’t wear a name tag.

Blazer said “we pay for what we have” and told the audience that his company is debt-free.

Blazer said there’s more going behind the scenes at his company than most people realize. The market isn’t the only place where his company is expanding, he said.

“We have other things going on besides the market itself that you see,” Blazer said. “My son got involved with Frank and other people and really created an international kind of situation for us, where we’re growing and shipping out of Mexico, Central America, and South America, a lot of tropical type products … we go and ship those products to receivers all over the country, mostly on the Eastern half of the country, from Chicago up to the East Coast. There’s a lot of that going on. We have our own places where we’re packing and shipping that we put in place. We also have some places where we actually have our own farms where we’re growing stuff. So it’s a complicated thing going on down there. Also, we’re involved in a shipping business where we’re getting to provide a route for product coming out of southern Mexico and the East Coast to the United States. That’s going to start up at the end of October.”

Blazer said the expansion of the current market has been years in the making.

“At the point we’re at right now, we’re going to grade the site, complete that, stabilize the site, plant trees,” Blazer said. “There will be more trees planted than were taken out, by a long shot. So it’s going to be a green situation over there, relatively speaking.”

He said plans for the expanded building came together in the last few years.

“We have it phased so that perhaps when we get this part of it done, with the land moving, which will probably be in the middle of the winter or maybe by spring, we might have it done,” Blazer said. “Then at that point there we’re going to make a decision about when to start the building.”

As to the actual start date of the building, Blazer said he’s “not 100 percent sure.” He said his tax rates have increased and he’s having to account for the costs of providing insurance under the Affordable Care Act.

He said he’d like for the market to become a better place to shop on the weekends because that’s when many people shop for groceries.

“What I really wanted to make happen, was for the weekend people that are really jammed in there, I wanted to make it so they could really have a nice place to come to on the weekends, where they could enjoy themselves,” Blazer said. “They wouldn’t get pushed around, shoved and we could get our work done efficiently and produce our products efficiently and make sure that would work for them.”

Blazer said the expansion of the market shows he is committed to sticking with the community that helped him grow and sustain his business.