A photo of Lauren Myracle from the April 29 event posted to Tumblr by author Len Vlahos. This image has been cropped to avoid identifying DHS students.
Share

A photo of Lauren Myracle from the Aug. 29 event posted to Tumblr by author Len Vlahos. This image has been cropped to avoid identifying DHS students.

Editor’s note: This article contains language that some people may find offensive.

There was a lot of confusion regarding a note Decatur High School Principal Noel Maloof sent to parents about something author Lauren Myracle said to the school’s ninth graders on Aug. 29.

Decaturish.com filed a records request for emails Maloof received about the Aug. 29 presentation in order to clarify what happened.

School officials would not repeat what the author of the “Internet Girls” book series had said, and neither would officials with the Decatur Book Festival, which invited the author. The note itself was vague and only referred to an “unfortunate event” involving an unnamed author, identified as Myracle by multiple sources. A parent contacted us wanting to know what it was all about.

City Schools of Decatur provided two emails sent to Maloof. In one of the emails, a teacher-librarian recounted what Myracle said.

“Lauren Myracle started by talking about writing books with realistic characters and situations and that many of her books have been challenged because they don’t cut away from the first kiss to the next morning,” the teacher wrote. “She believes that teens should be informed. There are realities like getting your period and dealing with tampons. She talked about how grown ups are scared to have open dialog about sex.

The emails are posted beneath this article. Myracle did not return a message seeking comment.

CSD Superintendent Phyllis Edwards said that CSD made the decision for Maloof to send the note and it wasn’t done at the request of the Decatur Book Festival.

“We wanted to make sure that we were ahead of it in case there was a problem. That’s what we do. If something comes up, we try to get the word out to the best of our ability,” Edwards said. “This is something we honestly can’t speak about.”

Maloof said he wasn’t in the auditorium for the presentation, but said that several teachers told him what happened.

“I know one of the questions is why I didn’t include more specifics in my letter,” he said. “Partially, it’s because I wasn’t standing there listening to it.”

Maloof said his note to parents was an attempt to be proactive, instead of reactive.

“It wasn’t something I got a deluge of complaints about, but it’s something I like to get in front of,” he said. Maloof added that the Decatur Book Festival representatives “reacted appropriately and quickly” when school officials contacted them about it.

We also received an email sent to Maloof by Diane Capriola, children and teen program manager for the Book Festival. In the email, she apologized for the incident.

“The DBF would never condone this type of behavior from a visiting school author, nor would it ever occur to us to expect it,” she wrote. “Ms. Myracle’s disregard for appropriateness and lack of restraint is incredibly disappointing to me as the coordinator of these events and also on a personal level, as the mother of three teenagers.”

Here are the emails in question. The names of the teachers involved have been redacted because they didn’t pick the speakers and have no control over what was said. The email addresses of Book Festival representatives have also been redacted: 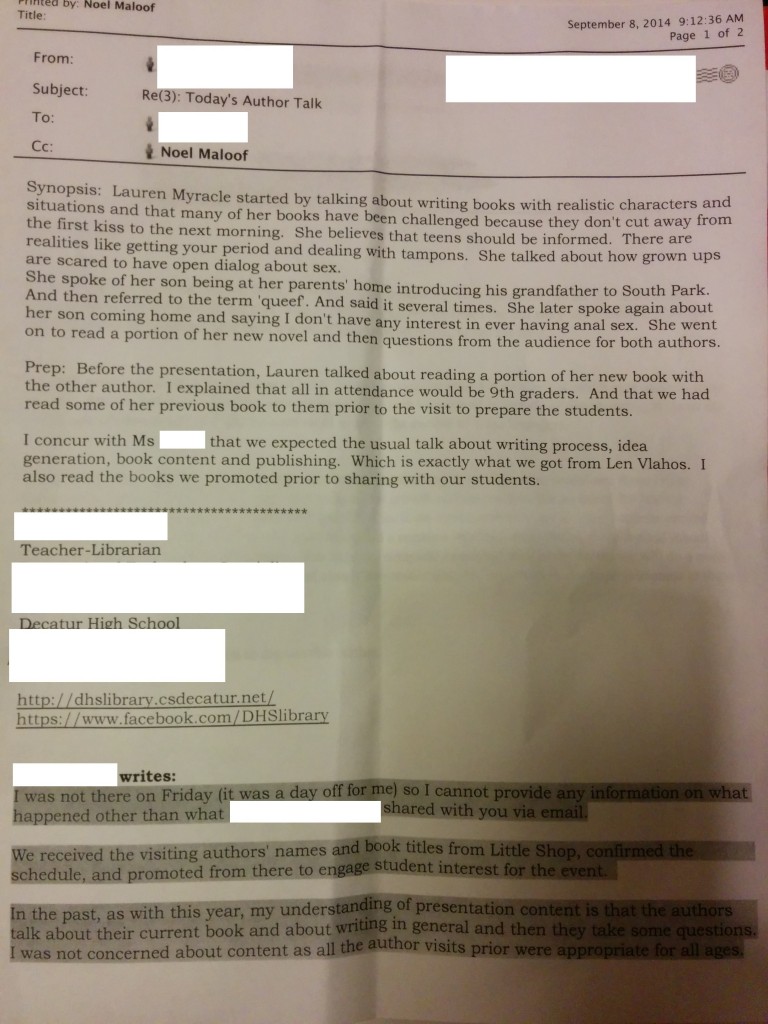 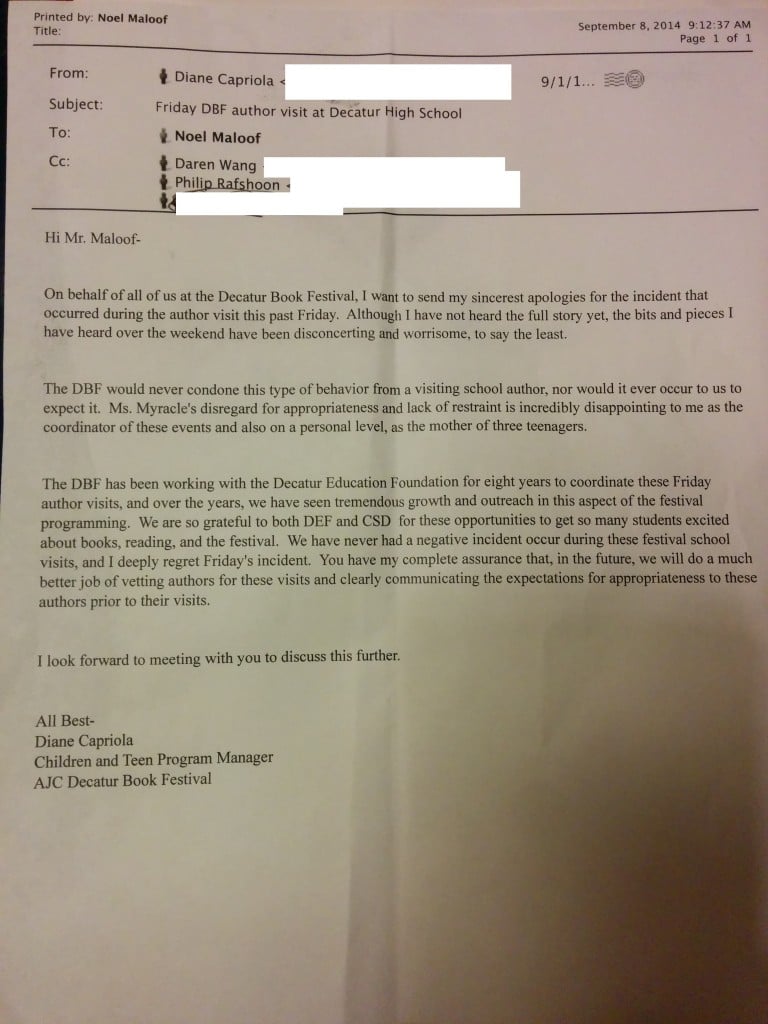