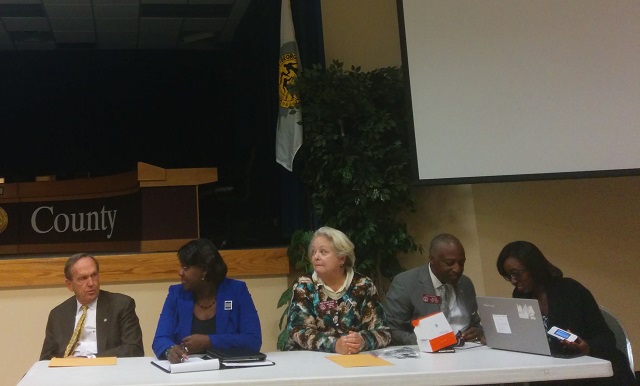 This story has been updated

Before legislation to create a new city of Tucker, Briarcliff or Lakeside comes up for discussion, the delegation must fix DeKalb.

Jacobs said proposals to reform the county’s ethics board, its auditing process, and its purchasing process must take priority over new cities.

“I am 100 percent certain that the vast majority of citizens all across this county, north, south east and west agree with that,” Jacobs said, to applause. “And if we don’t act then shame on us, period.”

The comment came toward the end of a lengthy meeting at the Manuel Maloof auditorium in Decatur. The timing of the meeting couldn’t have been more appropriate, given the topic. Earlier in the day, suspended DeKalb CEO Burrell Ellis received a temporary reprieve after jurors couldn’t come to a consensus on charges that he hit up vendors for campaign contributions.

Most of the people in the room were all on the same page about DeKalb County’s general dysfunction. But the process for creating new cities exposed divisions among the legislators, mostly along party lines.

Jacobs said the deadline is intended only for the three cities involved. But the reality is that deadline is having a trickle-down effect that’s motivating other cities to put their plans on the record.

As far as the sense of urgency behind Briarcliff, Lakeside and Tucker, Jacobs told the audience that’s been the refrain every year: what’s the rush? He said it will be repeated if the cityhood discussions carry over into the 2016 session.

“At some point we have to get everyone to come some sort of agreement and stop pulling the General Assembly in three different directions,” he said.

And the lack of local control is really the problem, state Rep. Michele Henson, D-Stone Mountain, said. The cityhood bills are general legislation, which requires no signatures from other delegation members. But annexation bills are local legislation, which requires nine of 16 DeKalb House members, four of seven DeKalb County Senators to move forward.

“I think the problem is that there is, there no longer is any respect at all in the General Assembly for local legislation,” Henson said. “Now, they have just arbitrarily, many years ago with Sandy Springs, decided this will be no longer local legislation, this will be general, but annexation, which could include as many people into a new city, has to be local … In fact we’ve even had to set up rules that said all of the legislators, or all of the representatives representing a city have to sign off on an annexation bill. So I wonder why that people outside of DeKalb County are making this decision.”

Henson added, “We should work it out ourselves.”

Henson’s remark got applause, too. But Jacobs said so far, no one has stepped up to the plate to fix the problem.

“You can applaud that if you wish, but the reality is nobody has ever stepped in to work it out,” Jacobs said. “And now we have a process to work it out. If someone else wants to propose something different, I am all ears.”

State Rep. Mary Margaret Oliver, D-Decatur, left the meeting early to attend another meeting. She said she would file bills to reform DeKalb, based on recommendations by the Blueprint DeKalb Committee and the DeKalb Government Operations Task Force, in the 2015 session. She said she’s mainly concerned about “islands,” unincorporated areas of DeKalb that are not annexed into a city and not part of a map for a new city.

“Now Decatur only wants commercial area,” Oliver said. “They don’t want residential, but … that plan in connection with Lakeside, Briarcliff, has a lot of islands in it. That’s what is worrying me.”

This is a partial video of the Oct. 21 meeting. The video was filmed by state Rep. Dar’shun Kendrick: