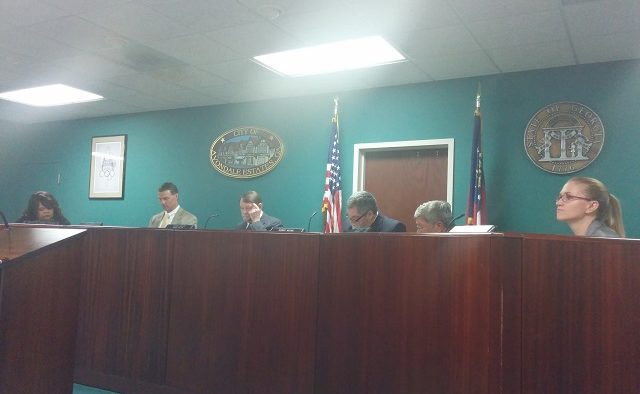 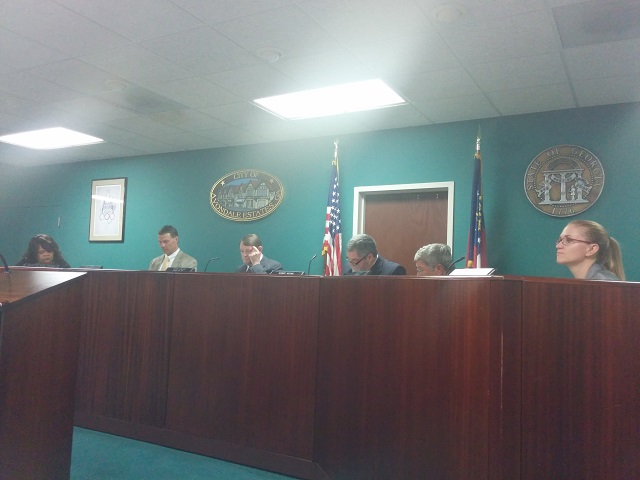 Four City Commissioners on Oct. 20 voted unanimously to accept the resignation of Ed Rieker, who announced Oct. 2 that he was resigning to take a university teaching job.

Rieker’s resignation came as a surprise to many. He was in the third year of his second term. The resignation followed a tough Oct. 1 meeting about annexation, but Rieker seemed upbeat afterward.

Now Terry Giager, who has been Mayor Pro Tem since 2012 and a commissioner since 2009, will be the mayor until a special election is held March 17. Giager said he isn’t interested in running.

“I’m in this position because Rieker did put in his resignation,” Giager said. “He’s done a lot for our city and progressed and created a path for us to development and growth. As far as I’m concerned, I want to continue on that path, to emulate and copy the dream that he had and the vision for our city.”

Commissioners said they were flooded with emails from Rieker supporters who encouraged them to vote against the resignation. They said legally, they couldn’t do that.

“I would like to respect people’s personal preferences and what they have time for in their life,” Commissioner Lindsay Forlines said. “I hate to call this a formality, but I don’t think we can force someone to serve. He only has so much time and he has a new professional endeavor.”

Giager will have much to do as he tries to put the city’s annexation discussions back on track. Avondale Estates, like Decatur, is trying to push its annexation plans forward before the 2015 legislative session. It’s widely expected that proposals for a new city – Briarcliff, Lakeside, Tucker or some combination of the three – will be presented next year. The need for revenue-rich commercial property could produce overlapping maps, and the cities want their legislators to stake their claims early.

But Avondale’s got several problems there. The problems are, in no particular order:

– The city’s state representative will need some convincing. State Rep. Karla Drenner, D-Avondale, is the city’s legislator. Rieker asked her to introduce an annexation bill this past March, and the legislation included a map with commercial areas around Rio Circle and several neighborhoods.

Drenner thought the bill had support, and was none too happy to learn that many residents didn’t even know about it. Commissioners are considering voting on another resolution at their Oct. 27 meeting asking Drenner to file an annexation bill, but the state representative didn’t commit to introducing it, telling Decaturish, “There are four annexation methods that can be used, with going to the Legislature as only one of the four. It is possible to pursue other methods prior to utilizing the state.”

– Rieker was the city’s lead on annexation. The former mayor personally met with neighborhoods, specifically Forrest Hills and the homes around Katie Kerr, about being annexed into the city. He was their main contact. Giager mentioned this problem work session on Oct. 15. “Mayor Rieker was a guy that was so aggressive in going out there all the time, probably one of the weaknesses he had was he worked too much and didn’t delegate. He has been the frontal force or assault on this whole annexation thing,” he said.

Now Giager and other commissioners have attended these meetings. Giager and Commissioner Randy Beebe said during the Oct. 20 meeting that they met with residents of Ivy Hill on Sunday. Beebe said Drenner showed up to that meeting as well to answer questions.

– People living in Avondale will need some convincing. Drenner’s bill shocked and angered residents, who called on their government to be more transparent about its plans. The commissioners say they are listening, creating an annexation page on the city’s website to provide information about the city’s plans and pending petitions, including one from residents of Stratford Green. Avondale resident Candace Jones spoke during public comments on Oct. 20, and she urged commissioners to provide more information about how annexing these areas will affect city services.

– People outside of Avondale will need some convincing. Commercial property owners around Rio Circle and the owner of the DeKalb Farmers Market sent the commissioners a request to be removed from the annexation map. Avondale officials are trying to arrange a meeting with these property owners, but it’s not clear if the owners will want to attend. Commercial tax revenue will be important to the annexation plans of any city, but the owners say they’re not interested in joining Avondale.

The Rio Circle property owners have circulated a petition to be annexed into Decatur. Robert Blazer, owner of the DeKalb Farmers Market, wants to stay in unincorporated DeKalb County. His second choice would be a bigger city, like the proposed city of Briarcliff.

Giager said during the meeting that other commissioners tried to persuade Rieker to change his mind and finish out his term.

“We really don’t have any choice in the matter,” Giager said. “I honestly believe every commissioner here has talked to mayor Rieker. This is what he has chosen to do. This is out of respect to our old mayor for seven years of hard work.”

For Avondale’s new mayor, the hardest work is yet to come.