I have accepted a professional opportunity that will require a significant amount of my time and attention. Therefore, I am resigning as Mayor effective today. The City of Avondale Estates and its residents are unique, charming and vibrant. It has been a privilege and honor to volunteer and serve as your Mayor.

Rieker made the announcement to residents via an email from the city. Here is a screen shot of that email: 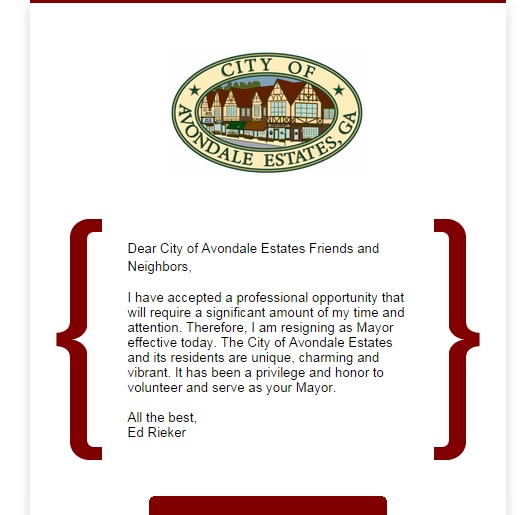 Avondale Estates Commissioner Randy Beebe spoke to Decaturish and said that he found out about Rieker’s resignation an hour before the city distributed its email. He said he did not know what job Rieker had accepted. Beebe said that earlier this year the City Commission had temporarily moved its regular work session from Wednesday to Thursday to accommodate the mayor’s teaching job at Georgia Tech. The city has reverted back to its regular work session schedule.

The Atlanta Journal Constitution reports that Rieker has accepted a job at Emory University.

Beebe said in the interim Mayor Pro Tem Terry Giager will act as the city’s mayor. Rieker has been the mayor for the last seven years. He was first elected in 2007, and was reelected to a second term in 2011.

Under the city’s charter, there will be a special election to fill the vacancy. The new mayor, once elected, will serve out the remainder or Rieker’s term.

Here is the language from the city’s charter regarding vacancies:

Vacancies—The office of mayor or commissioner shall become vacant upon the occurrence of any event specified as constituting a vacancy by the Constitution of the State of Georgia, the Official Code of Georgia Annotated, such other applicable laws as are or may hereafter be enacted, or this charter or should the mayor or commissioner no longer be qualified pursuant to this charter.

Filling of vacancies—A vacancy in the office of mayor or commissioner shall be filled for the remainder of the unexpired term by special election in accordance with Titles 21 and 45 of the Official Code of Georgia Annotated or such other laws as are or may hereafter by enacted.

Rieker’s resignation followed a lengthy Oct. 1 work session on annexation. The mayor called the work session after a meeting on Sept. 22 where residents confronted him about the filing of House Bill 1130. State Rep. Karla Drenner, D-Avondale Estates, introduced the bill in March at Rieker’s request, but commissioners had never discussed it publicly or passed a resolution in favor of it. The news that Drenner had filed the bill took many in the community by surprise.

A few residents found out about it at a Sept. 15 Avondale Estates Planning and Zoning Board meeting, and the emails started flying, producing a large turnout at the Sept. 22 meeting.

Rieker apologized several times for how he handled the annexation bill and each commissioner offered an apology for the situation.

Beebe asked Rieker if his resignation had anything to do with the annexation issue or last night’s work session.

“I asked him that. He said no,” Beebe said, recalling their conversation. “He said it was an offer he had to respond to and he thought about it and said, ‘There’s no way in the world I’m going to be able to do both of jobs.'”

The commissioner said he was sorry to see the mayor go.

“Personally I think he did a lot for the city,” Beebe said. “I think he had some issues. I think the city’s going to suffer business-wise with him leaving.”

On Oct. 3, Rieker released a longer statement explaining his resignation. To read it, click here.

Rep. Drenner said that she was shocked by the news.

“I don’t know what to say,” Drenner said. “I’m just kind of astounded about the whole thing. I understand there’s been some controversy that’s been going on in the community, but I just would’ve expected him to hang in there and try to address it.”

Decatur Mayor Jim Baskett was also shocked by the news.

“Whoa, it’s the first I’ve heard of it,” Baskett said. “I didn’t think the meeting went that bad last night.  I don’t have any comment until at least I can attempt to speak to him.”