The Solarium at the historic Scottish Rite building in Oakhurst. Photo by: Dan Whisenhunt
Share

The Solarium at the historic Scottish Rite building in Oakhurst. Photo by: Dan Whisenhunt

The City of Decatur will soon become the new owner of the historic Scottish Rite building in Oakhurst as part of a deal to save the building and resolve a lawsuit against its current owner.

City Commissioners on Oct. 6 unanimously approved a resolution to support the purchase of the building by the Downtown Development Authority. City Manager Peggy Merriss said the city will buy it for $1.45 million with a bond issued by the DDA. In late 2013, the building was put on the market for $2.1 million.

Mayor Jim Baskett said the city’s plans for Scottish Rite are, “to keep it the way it is.”

The DDA will pay off the debt service for the purchase using lease income from the building’s tenants and will hire a company to manage it. As part of the deal, both sides of a lawsuit filed by the Community Center of South Decatur against building owner Progressive Redevelopment Incorporated have agreed to stop the litigation.

Mayor Baskett described the deal as something akin to a shotgun marriage.

“That was part of our deal,” Baskett said. “We said if we’re going to do this thing, lawsuits are going away. You can’t lease property with lawsuits hanging over it.”

The city was initially reluctant to get involved in the dispute between CCSD and PRI. Baskett said in the end, the city decided it had to get involved or a community resource would be in jeopardy.

There were rumors that the building was in foreclosure, or headed that way. Merriss said that PRI will be the seller in the transaction.

“We want to prevent it from going into any kind of foreclosure or other such activity,” Merriss said.

Scottish Rite played an important role in the redevelopment of Oakhurst. The rehabilitation of the former convalescent hospital in the early 2000’s was the catalyst for the neighborhood’s gentrification. The building’s east wing, the Solarium, plays host to community events and wedding receptions and is controlled by CCSD.

Other records obtained by Decaturish.com show that over the years Community Center chafed under that arrangement. There were disagreements about who had the responsibility for making repairs to the structure under the terms of the lease. One of those disagreements sparked the lawsuit.

Many of the spaces at Scottish Rite are still leased, Baskett said. He said the restaurant space for McGowan’s Oakhurst Pub remains vacant.

The mayor did not indicate that there would be any changes in the existing leases. PRI still has a presence in the building but is expected to leave once the city takes control of the premises, Baskett said.

Back in 2010 the Atlanta Journal Constitution reported that Progressive Redevelopment Inc. defaulted on $8 million worth of bad loans and had several properties in foreclosure. Bill Adams, the real estate agent selling the property, told Decaturish in March that the company was still in the process of “winding down” its operations when it put the Scottish Rite property up for sale.

Here is the resolution passed by the City Commission: 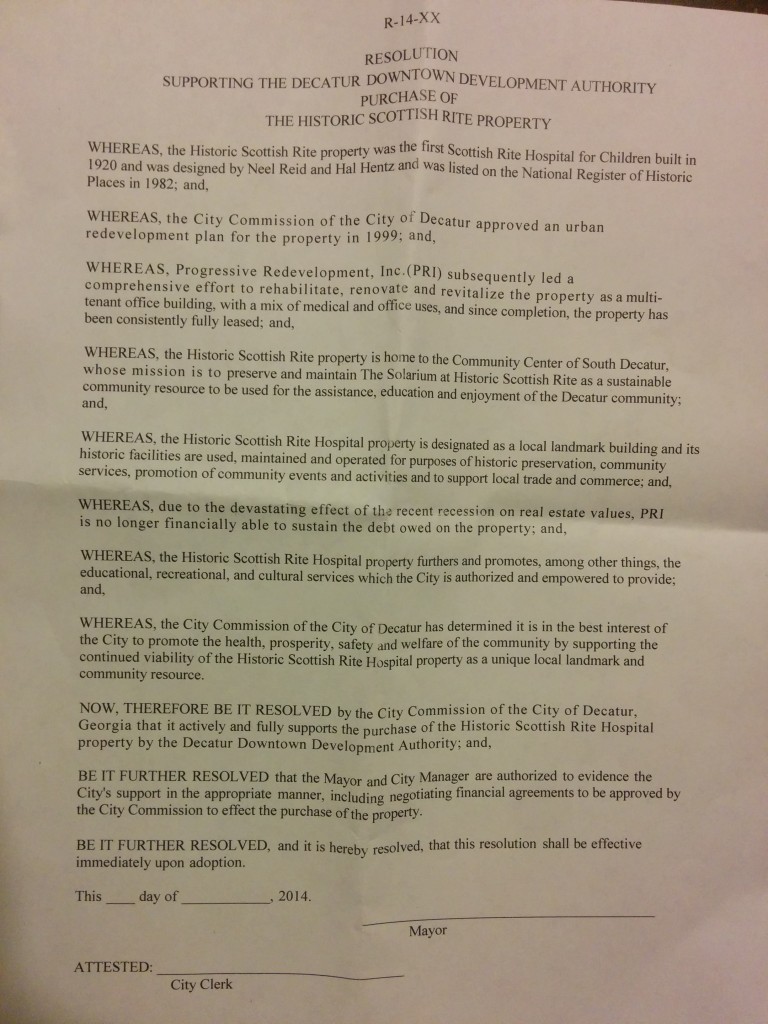