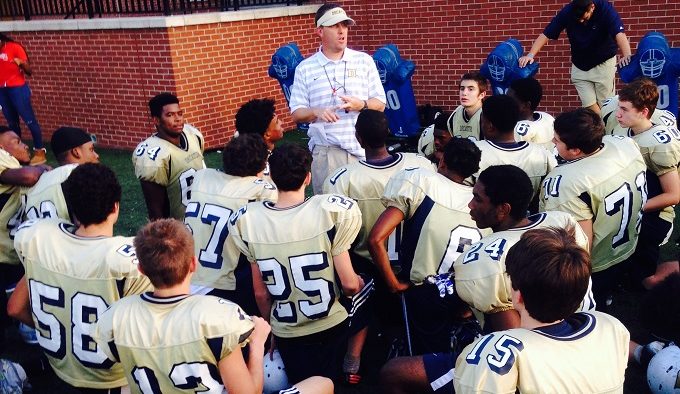 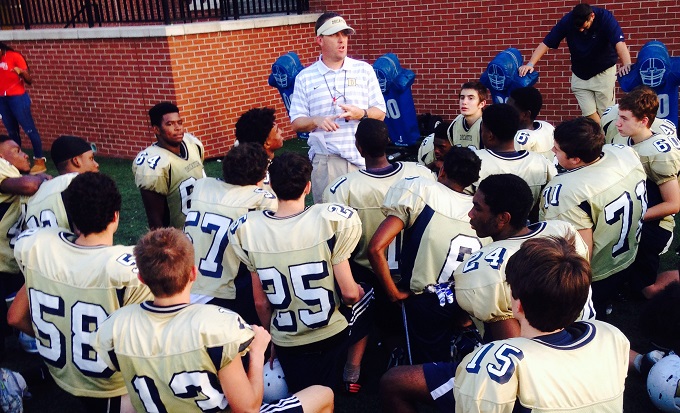 There’s a lot not to like about football these days. The National Football League is stocked with criminals and the money Ole Miss paid this week to simply replace its goalposts could fund a small country.

Thankfully almost none of that has anything to do with the sport at its grass-roots level.

(3-2 and 0-1 in Region 4-AAA) and Westminster (5-0 and 2-0), the state’s seventh-ranked AAA team in composite rankings, you may well feel something entirely separate from the game itself: a visceral and community-unifying twinge that still persists throughout the South every Friday night in the fall.

Both are old schools with stellar academic and football histories—Decatur started playing football in 1913 and has continuously fielded a team since 1921. If there’s a nostalgic, small-town aura in the stands, that’s probably mostly illusion. After all Decatur’s right next door to Atlanta and Westminster’s in Buckhead, the Tigris and Euphrates of ATL culture. Nevertheless, though one school public and one private, they are very similar in that both get the kind of heavy alumni turnout every game that you almost never see any more throughout metro Atlanta.

There’s no way of knowing for sure who might be Decatur’s oldest alumni attending tonight, but it might be Paul Sharian, son of the Sharian Carpets founders. He graduated from DHS in the early 1940s and who almost never misses a home game. There figures to be plenty representatives from each of the subsequent decades—the 1950s and 1960s DHS grads have a particularly vigorous email network—in the stands when the two teams kick off at 7:30 pm.

There’s also a parade starting at 5:30 pm from the lower lot entrance of the high school (next to the stadium) where it proceeds down Commerce, then right onto West Ponce de Leon, right on Church, then a right onto West Trinity Place, left on to North McDonough and ending in the upper parking lot (which will be closed from 4:00 pm until the end of the parade).

The game should be intriguing, though Decatur’s still trying to define its identity. Head coach Scott Jackson had to completely rebuild his offensive line, with left guard Brandon Crawford the lone returning starter from last year. In fact, for the first time this year he’ll start the same five-man unit for the second consecutive game.

The biggest surprise of the bunch is the freshman Hurst, who didn’t join the team until its third game, and didn’t make his first start until the fourth game against North Clayton.

“This guy has shocked the whole team,” senior tailback Elijah Rachell said. “He doesn’t back down from anybody anywhere.”

As the line’s improved, so has the performance of Decatur’s running backs. Rachell, who spent his first three years mostly as a blocking back while getting occasional touches, broke through for a career high 114 yards rushing against Jackson on Sept. 5, then followed that up one week later with 115 yards against Towers.

But he hurt his right knee against Towers and after having minor surgery yesterday, figures to miss at least two and probably three more games before returning. Two weeks ago against Washington, after Rachell removed himself from the game early in the first quarter, sophomore tailback Grant Walker took over. Though he’s shown flashes of elite-level talent Walker had been mostly inconsistent in his first 14 high school appearances.

But all that changed in the Washington game when he had a grinding 26 carries for 178 yards, the most yards by a Decatur back since Quendarius “Quen-D” Hall had 217 yards against Clarkston his senior season in 2010.

“I like running outside, I’ve always been able to outrun people,” Walker said. “But coach has been on me, telling me I can’t always outrun people at this level. He wants me reading the blocks, hitting the holes and going between the tackles instead of bouncing outside.”

Walker is just one of a young and talented corps still learning the game. He’ll share time with freshman Jarrett Ford, who’s played a larger role as a punt/kick returner, tailback and cornerback with each game.

Sophomore wide receiver/free safety Terrill Hall (Quen-D is his uncle), playing his first year of varsity football, has nine catches in the first five games, including five receptions for 126 yards and two touchdowns against North Clayton on Sept. 19. He also had one interception in each of the first four games, including one at the goal line against Jackson he returned for 78 yards, and another in the end zone on the game’s last play robbing Towers of a game-winning touchdown.

The offense’s fulcrum, of course, is senior quarterback Devontae Carter who’s often been victimized by teams’ pressure-cooker approach against Decatur’s inexperienced line. Still he’s completed 43 of 79 passes for 54.4 percent and an average of 13.3 yards per completion.

On Friday look for Carter to throw more, particularly to Hall and sensational sophomore Dennis Bell. He’s been underutilized this season, partly because of the O-line’s immaturity, and partly because he missed the entire Washington game with a concussion.

But also look for Carter to use his legs more. He carried for 84, 73 and 55 yards in Decatur’s first three games, and it’s a good bet he’ll execute the option read quite a bit against Westminster.

Westminster, in the same Region 4-AAA sub region as Decatur, will be the Bulldogs stiffest test yet. Led by linebacker Charlie Trense (who’s going to Notre Dame to play lacrosse) who had 14 and 12 tackles in the first two games, Westminster may have one of the state’s most skilled defenses. The Wolves held arch rival Lovett to 10 points in their opener, and powerful Elbert to a mere 7 on Sept. 12 in Elbert’s famed Granite Bowl.

They have an experienced quarterback in Rankin Woley, a world-class kicker in Trey Blasingame and talented running back in Isaiah Macome, who had a 70-yard kickoff return against Elbert and 130 yards rushing in a later game.

“They don’t beat themselves,” Jackson said. “They wait for you to make a mistake. If you’re going to beat them, you’ve got to match their tenacity.”

“I’d grade us out to a C,” Jackson said. “Most games we’ve played a good 34 minutes or so, but we haven’t come close to playing hard for the full 48.”

Carter disagreed with his coach saying, “I’d give us about a D.”

But then he gave his trademark smile before adding, “That’s a grade I plan to pull up.”