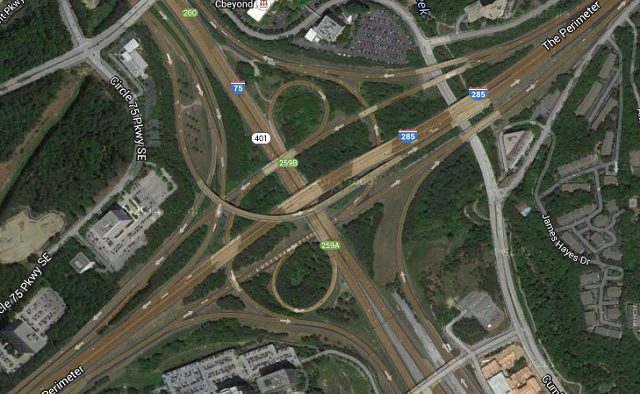 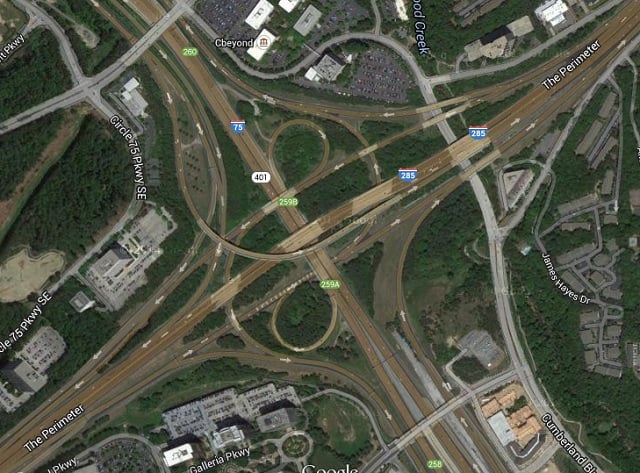 Transportation officials are urging drivers to be extra careful around the Cobb Cloverleaf as crews continue to their work on the Northwest Corridor express lanes.

The Cobb Cloverleaf, also known as the Kennedy Interchange, is located at the intersection of I-75 and I-285 in Cobb County.

According to the Georgia Department of Transportation advisory released today, drivers on the inner and outer loops of I-285 and drivers traveling south on I-75 need to slow down through the interchange.

“In conjunction with the construction of the Northwest Corridor Express Lanes project on I-75, it has been necessary to close the roadway shoulders in both directions on I-285 and also southbound on I-75 in this area,” the announcement from GDOT says. “These shoulder closures will remain in place through spring, 2015.  While all  lanes remain open, barrier wall has been installed which has the perceived effect of narrowing those lanes.

“With more than 400,000 vehicles travelling through this crowded interchange daily, it is important that drivers slow down, be alert, and allow extra space between their vehicle and those ahead of them.”

Contractors broke ground on the project last month. When finished, it will consist of 30 miles of toll lanes to provide some relief for congestion on I-75 and I-575. The $834 million project is a public-private partnership between GDOT and Northwest Express Roadbuilders (NWER), a joint venture of Archer Western Contractors, LLC, of Atlanta, and Hubbard Construction Company, of Winter Park, FL, according to a press release.

According to GDOT, there will be two new managed lanes on west I-75 between the interchanges with I-285 and I-575. The lanes are scheduled to open in 2018. They will be separated from the current interstate and will be reversible. That way, GDOT says, the road can carry traffic southbound during the morning commute and northbound during the evening commute.

“Above the I-575 interchange, one new reversible lane will be added in the I-75 center median to Hickory Grove Road and a similar new I-575 lane will extend to Sixes Road,” GDOT says. “Vehicles will access the NWC managed lane system via six new I-75 interchanges at I-285, Terrell Mill and Roswell roads, I-575 and Big Shanty and Hickory Grove roads and three slip-ramp access points from existing lanes on I-75 and I-575.”