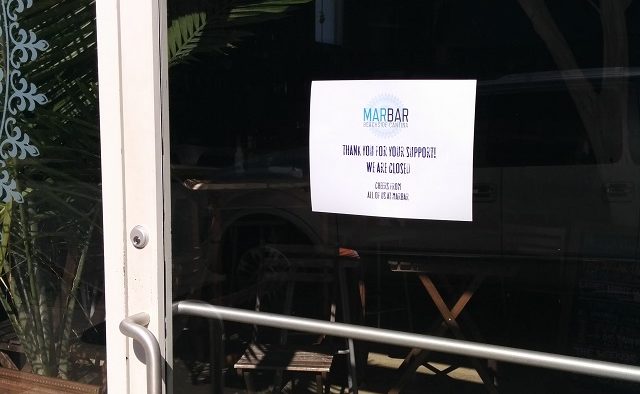 A sign on the door of MARBAR announcing that the restaurant has closed as of Oct. 22. Photo by Dan Whisenhunt
Share A sign on the door of MARBAR announcing that the restaurant has closed as of Oct. 22. Photo by Dan Whisenhunt

MARBAR reopened in May after a five-month hiatus to tweak the food and improve the service, but on Wednesday the restaurant announced it has officially closed.

A sign on the door said, “Thanks for your support! We are closed. Cheers from all of us at MARBAR.”

The restaurant was created by Humberto Bermudez. Alison Lueker Ritter, owner and executive chef of Sun in My Belly, had joined MARBAR as a collaborator for the reopening. It’s not yet known what will go in the restaurant space, which is located on East Howard Avenue.

Decaturish reached out to Marbar’s spokesperson for more information about the closure. This was her response:

Let’s just say this has been our motto…:)

THE MAN IN THE ARENA

Excerpt from the speech “Citizenship In A Republic”
delivered at the Sorbonne, in Paris, France on 23 April, 1910

It is not the critic who counts; not the man who points out how the strong man stumbles, or where the doer of deeds could have done them better. The credit belongs to the man who is actually in the arena, whose face is marred by dust and sweat and blood; who strives valiantly; who errs, who comes short again and again, because there is no effort without error and shortcoming; but who does actually strive to do the deeds; who knows great enthusiasms, the great devotions; who spends himself in a worthy cause; who at the best knows in the end the triumph of high achievement, and who at the worst, if he fails, at least fails while daring greatly, so that his place shall never be with those cold and timid souls who neither know victory nor defeat.