Attendees of the Krog Masquerade held on Oct. 25. Photo by Kim Hutcherson
Share 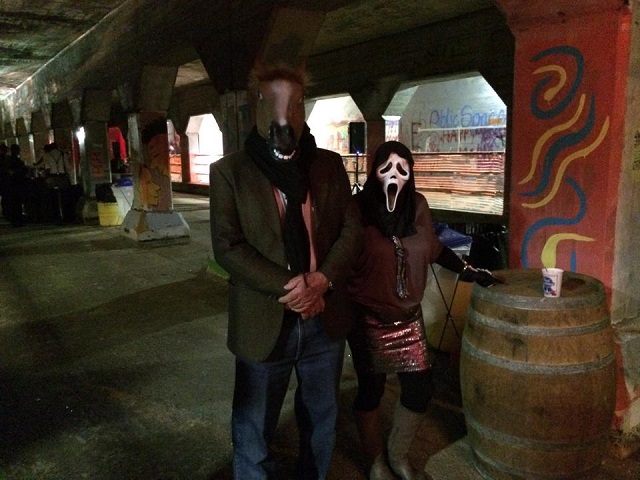 Attendees of the Krog Masquerade held on Oct. 25. Photo by Kim Hutcherson

On Oct. 27, the spokesperson for the group provided an updated figure of 1,000 tickets sold out of 2,000 available for the event.

Art was supposed to be the star of this party, the ever-changing tapestry of brightly-colored, complex pieces that make the Krog underpass seem magical.

Without them, the tunnel is just another urban concrete slab.

Organizer Randall Fox commissioned artists to repaint the walls after irate neighbors covered them up in protest, but Fox’s artists weren’t up to the task.  The walls were unnervingly bare.  A few large, colorful pieces were in place—images of Frida Kahlo, and Che Guevara.  But most of the new work consisted of random, single-color images.

At least one tagger visited the tunnel who was not affiliated with Fox and his crew.

“Rob all yuppies,” “f*&! y’all,” and “burn the condos” graced the walls on the north end. Coiffed masqueraders in expensive costumes tried to look casual standing next to the words “die yuppie scum” in giant block letters. Some of the more colorful graffiti on the walls of the Krog Street tunnel on Oct. 25. Photo by Dan Whisenhunt

There were several performers on hand.

The Black Sheep Ensemble was a big hit.  Their raucous rhythm section had the crowd grooving and the belly-dancer gave the local TV crew its money shot, although the band ended up being unable to play inside the tunnel due to the strange acoustics.

A troupe of performance artists included one unicyclist with mime-makeup, a formally-dressed couple walking on stilts and gogo dancers on raised platforms.

Atlanta’s own Baton Bob was on hand, but not to perform.  “I am a VIP guest,” he told Decaturish.  “I left my baton in the car tonight.”

Bob said he received an invite weeks ago, but knew he would attend when controversy erupted Thursday after the tunnel was painted.  “I was debating about it.  Then there was all this ruckus over the art in the tunnel.  I said I’m going to find out what this is all about.  But at the end of the day, we need to support each other collectively. Art is art.” None of the attendees we spoke to lives in the area. They all said they’d bought tickets before the controversy erupted. They said they came to celebrate Atlanta and its artists.

Men in tuxedos or sharkskin suits were everywhere. Some women were decked out in sequined evening dresses or the latest couture and wore towering high heels like they were headed to Los Angeles nightspot.  A handful of attendees dug out their 6-inch platform boots from the late 90s and were having fun reliving their raver days. 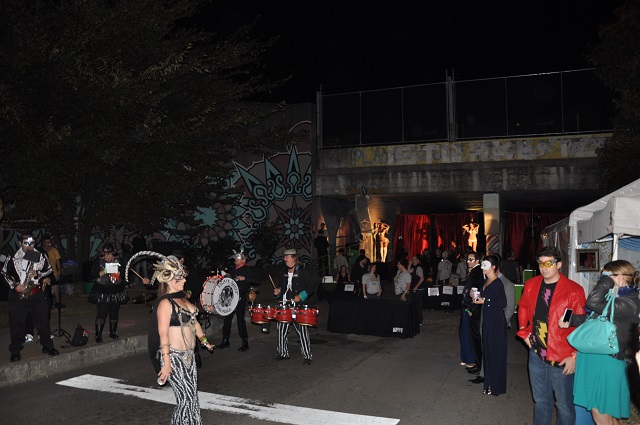 The Black Sheep Ensemble performs outside of the Krog Street tunnel on Oct. 25. Photo by Dan Whisenhunt

This burst of expensive, studied creativity seemed less bacchanalia and more like Cirque du Soleil. It was half Renaissance Fair and half “Party Monster,” with a touch of “50 Shades of Gray” thrown in.

The tunnel was just an exotic object, a prop. Masqueraders milling around in the Krog Street Tunnel on Oct. 25. Photo by Kim Hutcherson