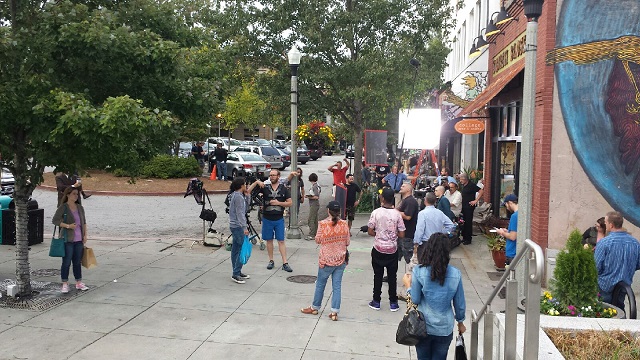 Film crews were in downtown Decatur on Monday filming an episode of “Red Band Society.”

The show, which airs on the Fox network, follows a group of teenagers living in a hospital, according to Internet Movie Database. Fox.com describes the show as, “a provocative, unconventional and unique coming-of-age dramedy about a group of rule-bending friends and the adults who mentor them through the ups and downs of adolescence in Los Angeles’ Ocean Park Hospital.”

Katie Abel with the city’s Community and Economic Development Office said the crew was in Decatur for one day and, “They were on location at Worthmore Jewelers and at Eddie’s Attic.”

Decaturish contributor Dena Mellick was walking downtown when she took this photo. She said, “My friend recognized one of the actors from the show.”