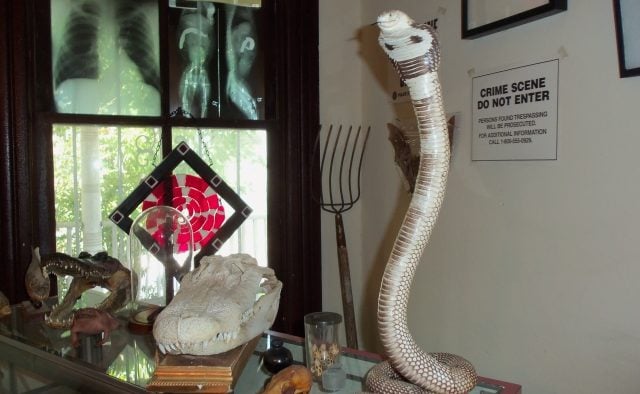 Some of the curiosities you'll find in The Odd's End, located in Avondale Estates, Ga. Photo By Dena Mellick,
Share 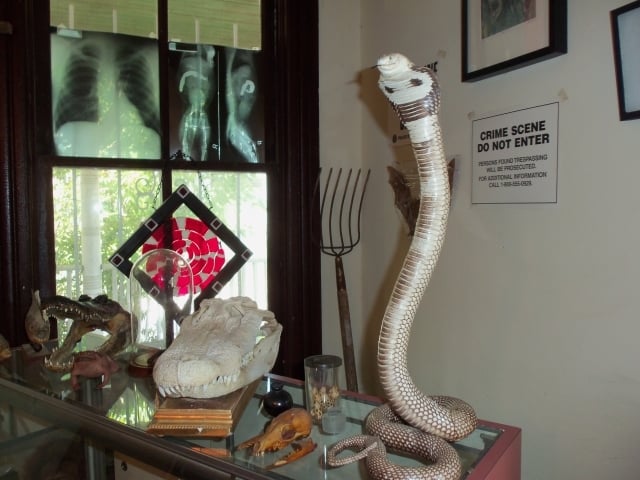 Some of the curiosities you’ll find in The Odd’s End, located in Avondale Estates, Ga. Photo By Dena Mellick,

The Odd’s End in Avondale Estates sits in an unassuming yellow Victorian-style house on College Avenue. But once you walk inside and see the old medical equipment, taxidermied bats, and swinging skeletons, you quickly realize that this is not your typical antique store.

Owner Merrick Mixson prefers the term “curiosity shop.” And while he admits it’s not for everyone, he’s found a following for his merchandise.

“Some of my main customers are doctors, morticians, and morgue workers,” he said.

Mixson said he’s selling more of his unique items to set decorators as Atlanta has become a go-to destination for film and TV productions.

“’The Walking Dead.’ The guys from that come in all the time,” he said. “I think the last thing they bought from me was an embalming machine.”

Mixson said this time of year is usually great for business as people look for bizarre decorations for Halloween. He said customers come in for items like “skulls, skeletons, bones, things in jars. You know, like specimens.”

The Odd’s End moved to Avondale Estates a few years ago from East Atlanta Village. Rockstar Gold, a rock and roll memorabilia store, also shared the location until earlier this year, when Mixson said his business partner left.

Mixson said he has always wanted to own a curiosity shop.

“I remember on vacation with my parents, we’d go up in the mountains or someplace way out in the boonies, and we’d always stop at those little roadside curiosity shops, and I just always wanted one of those since I was a kid,” he said.

He credited his mother with sharing a love of the odd with him while growing up in Charleston, S.C. Mixson said he initially collected all of his curiosities in his house, but his wife grew “tired of living in the Addams Family home.”

Now Mixson is constantly looking out for offbeat items for his store at flea markets, yard sales, and online. Mixson said he loves to discover pieces with a story behind them.

Mixson also enjoys telling the ghostly history of the Victorian home that houses his store. He said the house is believed to host at least three ghosts.

Mixson said one of the ghosts is said to be that of a man who burned to death in a room upstairs. Another is said to belong to a woman who ran a boarding house there. She is thought to have died in the home from an illness. And “there’s a little girl who a lot of people over the years claim to have seen there, sometimes holding a doll, sometimes not, but usually standing on the staircase or in the room by the kitchen,” Mixson said.

Mixson said three different groups of professional ghost hunters have visited the home and all claimed to have felt something. Mixson, his employees, and the home’s previous tenants have reported hearing footsteps and muffled conversations. They’ve felt unseen hands touching their legs and the backs of their necks.

Mixson said Mason McNay, an artist who is now setting up a gallery in the house, came by one day to talk to him. He said while they were sitting and chatting, they witnessed a Tibetan prayer wheel roll up a slanted countertop.

“It’s a prayer wheel. It should have rolled around in a circle, but it didn’t,” McNay said.

The artist is hesitant to attribute some of the strange happenings to ghosts, but he says a number of unexplainable things have happened to him in the house.

“I’ve had containers, like paint cups or coffee presses that I had just cleaned out and dried, suddenly full of water again and spill on me,” McNay said.

McNay said he was definitely spooked when he first started working at the house, but he doesn’t feel that whatever is there is threatening him. Instead, he feels inspired.

Mixson believes another spirit may have joined the group.

His friend, David Barge, passed away last year. Barge was a member of The Restraints, Atlanta’s first punk rock band, which opened for bands like The Ramones and The Clash. Mixson said Barge wanted to be part of The Odd’s End, but it never worked out.

“After his funeral … I started noticing the activity there picked up a lot … It seemed like jokes were being played on us all the time, and I got a very strong sensation that Dave came back to show me a good time for a while,” Mixson said.