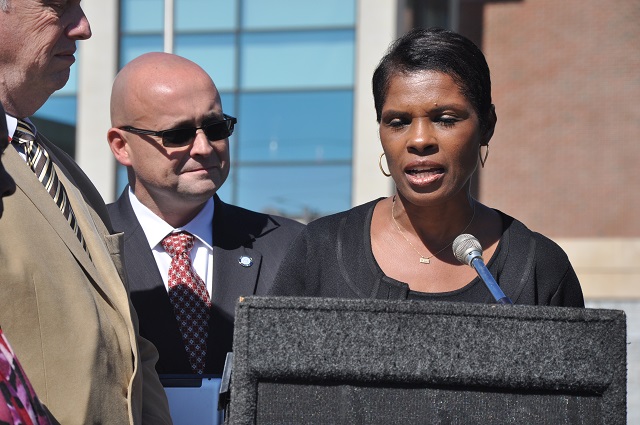 Superintendent John Barge was first elected in 2010 and decided to run against incumbent Gov. Nathan Deal in the 2014 primary instead of seeking a second term. Deal prevailed.

Wilson is in a close race against Republican Richard Woods. A recent poll found the race was essentially tied headed into the Nov. 4 election.

Barge and Wilson called a press conference in front of Tucker High School, where Barge took to the podium and decried the partisanship in public education.

“Education is not partisan,” Barge said. “Democratic children and Republican children need a strong education. The state school superintendent should be a nonpartisan race.”

Barge ticked off a list of stereotypes of members of each party, saying that Democrats and Republicans are guilty of making generalizations about each other.

“All of these faulty character traits cut across party lines,” Barge said. “That’s why it is essential for the voters of Georgia to use their God-given brains and research the candidates and make up their own minds for whom they should vote, which is what I’ve done and is why I’m supporting Valarie Wilson for state school superintendent.”

“I am honored to accept and embrace the endorsement from Dr. John Barge,” Wilson said. “While Dr. Barge and I come from different sides of the aisle as it relates to political parties, we agree on where we stand with public education.”

Woods, Wilson’s Republican opponent, immediately pounced on the endorsement, saying it’s also an endorsement of what he believes are “failed policies” at the Georgia Department of Education.

“By accepting Barge’s endorsement, my opponent is endorsing four more years of pursuing many of the failed policies that we’ve seen coming out of the GaDOE,” Wood said via press release. “My opponent is endorsing the continuation and expansion of a failed testing model, a teacher evaluation tool that overburdens our teachers and overemphasizes test scores, a broken relationship with the Governor and General Assembly, and a top-down approach to educational decision making.”

Wilson is a former member and chairwoman of the City Schools of Decatur Board of Education and is the daughter-in-law of former Decatur Mayor Elizabeth Wilson.

Elizabeth Wilson was at the press conference. Decaturish asked the former mayor if she thought Barge’s endorsement would help put Wilson over the top in the tight school superintendent’s race.

“I think she’s already over the top, but I think it will help,” she said, laughing. “I am so very optimistic about her. I think she is the best candidate and I think that this will help a lot.”