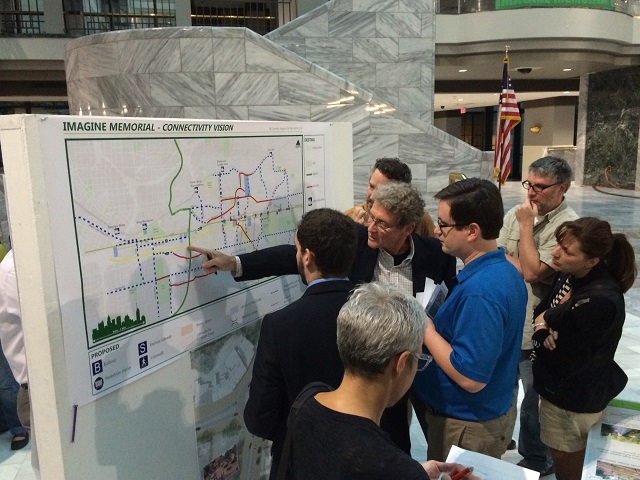 The meeting was part of a collaboration between regional planning authorities and Georgia Tech called the Imagine Memorial Design Studio.

Concerned citizens pored over maps and proposals, engaged students in animated conversations and filled out surveys to register their feedback. Residents crowded around exhibits.

Officials with the Beltline, MARTA, the City of Atlanta, the Atlanta Regional Commission and the Georgia Department of Transportation were on hand to answer questions.

“I feel very excited about the buy-in that I see from the community and the major stakeholders, who have said Memorial Drive is worth this effort,” she told Decaturish. “It is the east-west spine, a major corridor in our city, connecting so many vibrant communities, that it is time to imagine what can come to be on Memorial Drive to enhance the work that’s already happening in the neighborhoods to make this entryway for us the beautiful destination that it can be.”

Archibong lobbied Georgia Tech Professor Mike Dobbins, a former city planning commissioner, to choose Memorial Drive as the subject of this year’s design studio. Every year, graduate students at the School of City and Regional Planning select an urban feature around Atlanta to analyze for the Design Studio class.

“Our vision for the corridor is to figure out what everyone else is looking to do and try to provide a few more ideas,” graduate student Elizabeth Vason said. “In general, we wanted to improve both affordability and economic development, while keeping an eye on transit as well as the pedestrian experience.”

The team consists of eleven graduate students majoring in architecture, civil engineering and transportation. They examined every property along the Memorial Drive corridor from the Capitol to Candler Road. The students focused not just on the properties’ current condition, but also examined how they could contribute to the overall viability of Memorial Drive.

Students came up with projected costs and timelines for every project by reviewing and compiling all previously-approved neighborhood plans.

“We spent a lot of time paying attention to the good planning work that has been done,” Dobbins said.  “Our goal was to take that and create an overall picture.  They’ve done outstanding work.  And they’re not done yet.”

The class also built a traffic-flow model of the Memorial Drive corridor. They found that reducing speed limits in some areas would reduce emissions and relieve traffic jams.  Slower speeds allowed more cars to access and navigate the road, according to the students’ model.

The students clocked many hours of field work, speaking to residents and attending Neighborhood Planning Unit meetings and determining what issues were most important to people who live and work along Memorial Drive

They found that reversible lanes (colloquially known as “suicide lanes”) were a major concern for residents. The design studio team presented several alternatives for lane configuration, along with suggestions for reworking several intersections.

Students said one thing they heard “over and over” was concerns about North-south connectivity. Their analysis incorporates increased access to transit lines north and south of Memorial.

The students, along with Dobbins and Archibong, asked for feedback repeatedly.

“Community input has been the cornerstone of our efforts,” graduate student Thomas Hamed said.  “Now we are relying on the community to help us refine our material even more.”

The Imagine Memorial design studio team has set up a Facebook page where the public can examine materials, ask questions and make suggestions to the Design Studio team.  Residents and concerned citizens are invited to join the Memorial Drive Studio Facebook group (www.facebook.com/groups/memorialdrivestudio).

They can email the team for more information at [email protected]