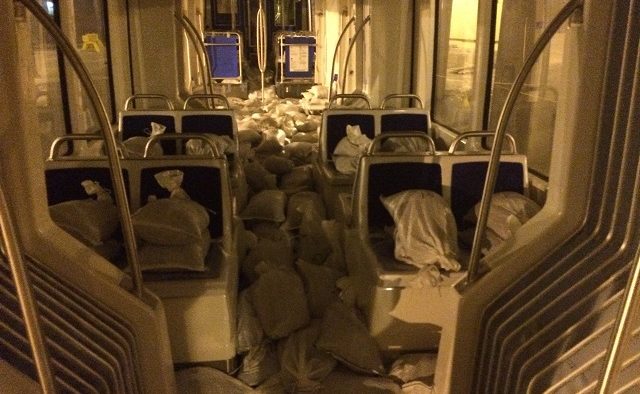 A photo from last week's streetcar test, showing the cars loaded down with sandbags. Photo provided by Atlanta Streetcar.
Share 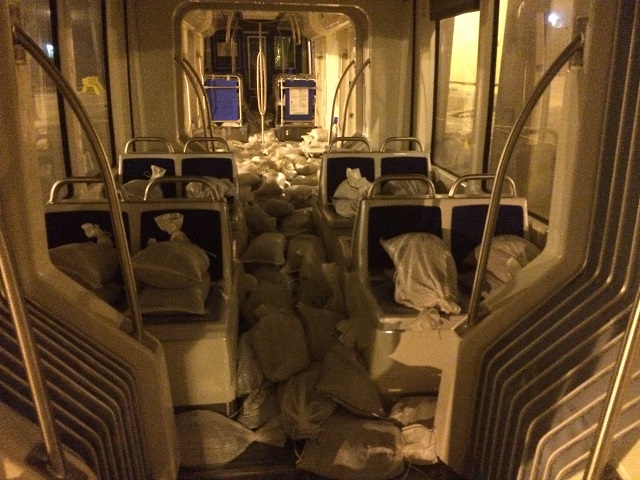 A photo from last week’s streetcar test, showing the cars loaded down with sandbags. Photo provided by Atlanta Streetcar.

Performance tests on Atlanta’s long-promised Atlanta Streetcar Project have been lighting up the night this month.

MARTA and City officials are conducting a series of evaluations on the four cars that will comprise the first Streetcar fleet. Since the beginning of October, braking, electrical power and towing capacity have been assessed. The cars have even been loaded with sandbags to simulate maximum-capacity situations, all to ensure the system is ready to go by the end of 2014.

“The testing of the streetcars has been going very well,” Atlanta Streetcar Communications Director Sharon Gavin told Decaturish. “We’re all looking forward to the next phase, where we’ll have vehicles out testing during daylight and then, of course, to opening up later this year.”

The total project will cost about $93 million.

So far, all trial-runs have been conducted between 11 pm and 5 am, since road closures and multiple support vehicles have been necessary.  But that will change once the signal interface system, currently under review, has been cleared.

The interface system is comprised of unique signals and sensors that help the Streetcars make turns and navigate intersections along the route, while safely accommodating vehicle, cyclist and pedestrian traffic.  Tests conducted Wednesday night revealed a few spots along the line where signal-timing needs to be adjusted, Gavin said.  Atlanta Streetcar and MARTA officials are collaborating with contractor URS to tweak the intervals, and then signal assessments will be conducted again.

Once the signaling system gets the “all clear,” Streetcar testing will take place during daytime, traffic-heavy hours.

Evaluations so far have focused specifically on ensuring performance in high-traffic situations.  In one test, the cars were packed with 28,000 pounds worth of sandbags and water to simulate the weight of 200 people, the Streetcar’s maximum, standing-room-only carrying capacity.  Then the Streetcars made multiple circuits along the full track, accelerating to a top speed of 25 miles-per-hour and periodically coming to a full stop.

Towing capacity for the cars has been gauged by running two units coupled together along the Edgewood Avenue section of the line.

The electrical system has undergone extensive testing.  Streetcars will be powered by a single, 750-volt overhead wire and guided by a rail embedded in the pavement. This wire not only propels the car. It also runs the cars’ air- and heating-systems. It powers the cars’ “self-leveling” mechanism, which ensures that riders can step easily from raised platform stops onto the Streetcar itself.    All of these features have been evaluated separately this month.

Overall, the Streetcars are passing the tests, Gavin says, adding that MARTA and City officials are happy with the results they’ve seen so far.  They have not, however, set a firm date for launch.

But Gavin insists that tests show the system is “on track” to open to the public by the end of the year.

Once open for business, the first phase of the Atlanta Streetcar project will run every 15 minutes during daytime hours, seven days a week. The proposed hours of operation are still in flux. The website provides conflicting information about operating times.

Each Streetcar is climate-controlled and 80 feet long, with room to seat 60 people along with four designated wheelchair stations.  The Streetcar will make 12 stops along a 2.7-mile route that runs from Centennial Olympic Park to the Martin Luther King Jr National Historic site.

Here are some videos of the Streetcar testing in progress:

Correction: An earlier version of this story misstated the project’s budget. This story has been updated to reflect the most accurate information.