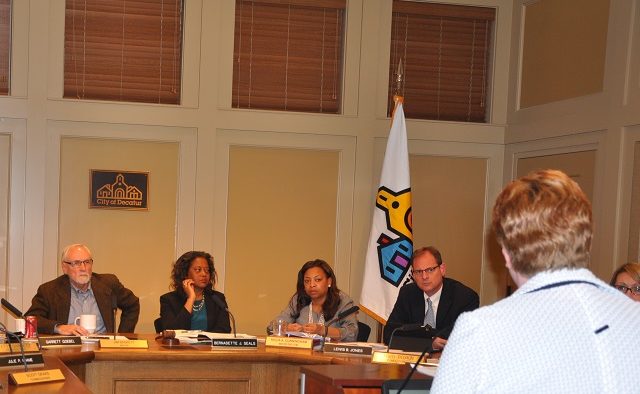 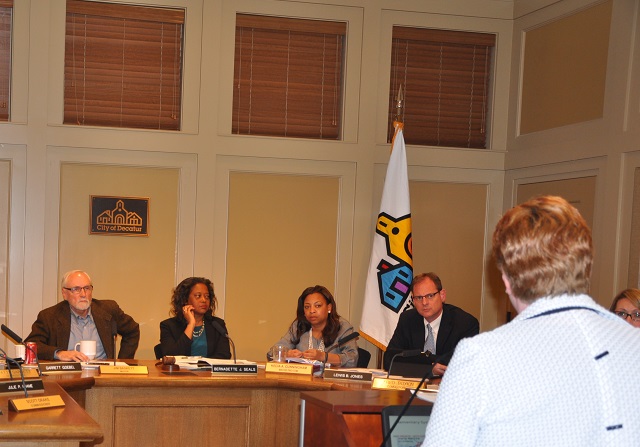 City Commissioners and School Board members met in a joint work session on Nov. 12. Photo by Dan Whisenhunt

The city of Decatur needs more commercial property. The school system needs room to grow as its population booms.

Annexing more areas into the city would be a solution to both problems. Seeking that solution will be a tall order for a city that in 2012 tried, and failed, to annex many of the same commercial areas it’s trying to annex now. The issue died down in 2013. Bill Floyd resigned as mayor shortly after commissioners approved the annexation recommendation. That recommendation went nowhere in the 2013 General Assembly because it didn’t have a sponsor.

There was fierce public opposition to it when commissioners approved the annexation plan. Mayor Jim Baskett, who took over after Floyd left, told commissioners and school board members during a joint work session on Wednesday that he didn’t have the stomach to try again last year.

He said he was “weary of annexation and uncertain that it had the potential to go anywhere.”

“We just backed away from annexation altogether,” Baskett said. “We just let it go because it was such a difficult thing to do and I was brand new on the job.”

The issue didn’t get any easier. Commissioners and School Board members called Wednesday’s work session to talk about the city’s current annexation plan, one that has to take into account phenomenal estimates of projected student enrollment. The system’s current enrollment is 4,336 students. A consultant’s report on enrollment estimates that the city’s school system will grow to 7,398 students by 2020 without annexation in a high-growth scenario. If the city is able to annex the 1.6 square miles in its current plan, it would increase that number by 747.

City Schools of Decatur in 2013 asked commissioners to do something about its growing enrollment. CSD requested commissioners put a $59 million bond issue on the ballot, but commissioners voted unanimously to postpone it until November 2014. It wasn’t on the ballot this year either. In the meantime, CSD borrowed $18 million in certificates of participation money, referred to as COPS, to begin the projects at Decatur High and Renfroe Middle.

At a meeting on Nov. 11, School Board members approved design concept for renovating both schools, which will cost more than $90 million to implement. CSD is paying for the project in phases. Their financing plans assume commissioners will vote to put a GO bond on the ballot.

Decaturish asked Baskett if he regretted the city postponing the general obligation bond in 2013.

“No,” Baskett said. “It led to us working together so well to get to a point now where we all have so much more understanding of the predicament schools are in and for them to understand our concerns … I have no regrets. It worked to bring us together to work together.”

School Board members pressed Baskett and the commission on the annexation. They wanted to be sure commissioners will commit to helping CSD find a place for additional schools. The city is working to complete its final annexation master plan by Dec. 1. Under that timeline, the School Board would consider a resolution in support of that plan on Dec. 9 and the City Commission would consider approving it on Dec. 15.

Commissioners said they were on the same page with the school system. That will be helpful, especially if the annexation plan that’s being discussed doesn’t fare much better than the one from 2012. If that happens, CSD will have to look for ways to grow within the city’s geographic limitations.

According to the consultant’s report, if Decatur doesn’t annex property it will mean higher taxes for Decatur residents and operating deficits for the school system.

Superintendent Phyllis Edwards discussed some of the possible options. They include turning College Heights Early Childhood Learning Center and turning it into a K-3 school. Another option is doing an addition to Glennwood Elementary and turning that addition into a CSD’s fourth and fifth grade academy, which would free up the 4/5 Academy at Fifth Avenue School building.

Edwards said that while there are no current plans for either of these scenarios,  they are “possibilities the school board is going to have to consider.”

Tom Sayre from the Sizemore Group, the consulting firm that conducted the enrollment study, said CSD is considering several scenarios for expansion if the city doesn’t annex more property. Other options include expanding Winnona Park Elementary and Westchester Elementary. Oakhurst and Clairemont Elementary are “pretty much maxed out.”

“There are a number of options that they are investigating and they have a variety of pros and cons,” Sayre said. “One of the most dire that they have talked about here is the possibility they might use eminent domain to annex into the school system pieces of property which are not currently in the school system. The probability they would do that is increased if annexation does not occur.”

School Board members Annie Caiola and Julie Rhame asked the city about the possibility of using the Callaway Building on W. Trinity Place. The city recently purchased this from DeKalb County and it’s near the high school. DeKalb County signed a two year lease with the city. The city intends to develop it into a mixed-use project to generate some of the commercial tax revenue it needs.

City Manager Peggy Merriss told commissioners and School Board members that the city’s current residential to commercial ratio is 86 percent to 14 percent. The annexation discussion is being driven, in part, by discussions about incorporating new cities of Briarcliff, Lakeside and Tucker or a combination thereof. The cities are required to present their finalized maps to the state Legislature by the end of the week. Those maps will have to include commercial areas.

“The new cities are looking typically 30 percent or greater commercial (property) to be what they would call, quote, viable,” Merriss said.

Commissioner Scott Drake said one possibility with the Callaway Building is using it for additional parking for the high school. Merriss said there are no definite plans for the building yet.

“At this point there isn’t anything that’s binding on anyone on any use,” she said. “We’ve looked at it as a redevelopment opportunity because it is certainly a prime piece of real estate. We have a lot of prime real estate that’s not (generating tax revenue).”