Atlanta joins with other cities in Ferguson protest

Atlanta joins with other cities in Ferguson protest 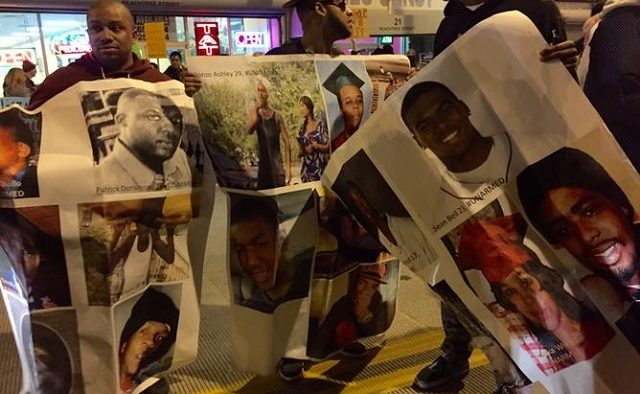 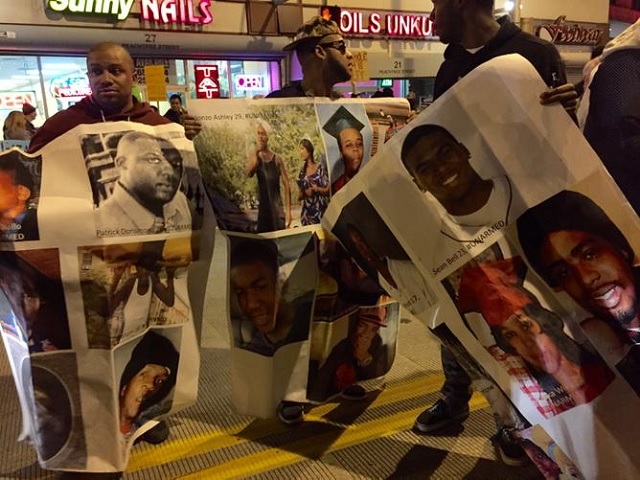 Reader Catie Leary took this photo during a rally held at Underground Atlanta on Tuesday, Nov. 25.

Outrage over the decision not to indict a Ferguson, Mo., police officer for shooting a black teenager continued Tuesday night. Protesters took to the streets in several major U.S. cities, including Atlanta.

Protests began at Underground Atlanta around 5 pm. Later in the evening, they blocked I-75 in downtown Atlanta, bringing traffic to a halt temporarily. The Atlanta Journal Constitution noted that this happened near Grady Hospital.  To read that story, click here.

CBS Atlanta reports that officers made 21 arrests, and there were reports of broken windows at a Wells Fargo and a restaurant. To read that story click here. An AJC reporter reported via Twitter that the “unofficial” arrest count was 33. WSB-TV reported that police arrested Creative Loafing freelance reporter John Ruch. There’s also a report that police arrested an 11 Alive photographer.

Residents in other Atlanta neighborhoods reported hearing helicopters. At a Neighborhood Planning Unit – O meeting in Kirkwood, Zone 6 commander Maj. Timothy Peek told a woman outside the meeting that he’d be busy over the next few days, saying Atlanta Police had assigned special details in response to the protest.

Many felt anger over what they believe was a flawed process that led to the non-indictment of Officer Darren Wilson, who is white, for shooting Michael Brown, 18. Brown and Wilson were involved in an altercation before the shooting, but witness accounts varied on many of the details surrounding what led up to the shooting. This has led to calls for police officers to wear body cameras.

In September, the Atlanta City Council passed a resolution for a feasibility study on the costs of equipping its officers with these devices, according to 11 Alive. To read that story, click here.

CNN reports there were protests in Los Angeles, New York, and Chicago.

CBS46 News Some protesters also posted updates on Twitter using the hashtags, #ShutItDownATL and #ATLFerguson. Others took to Twitter to condemn their actions.

All of you that #ShutItDownATL … tell me… what did you actually accomplish tonight? — Miss AsHLey © (@AshLeYChRisTyNe) November 26, 2014

wondering how many protesters at #shutitdownatl and elsewhere went out and voted this month. elections matter if you want change.

I am all FOR rallies, demos, speeches, signs, marches, but could def do w/o bad apples smashing my ‘hood. #ATLFerguson #ShutItDownATL

To be clear: VAST majority of #ATLFerguson protesters are being calm, peaceful. @repjohnlewis would be proud of 98% of ’em. #ShutItDownATL

All those hopping on #ShutItDownATL. Marching was not in the plan. Vandals are independent actors. Cops promised no riot gear. #ATLFerguson

Since when do white people speak for Dr. King? Was 10th grade US History so long ago? #Ferguson #ATLFerguson pic.twitter.com/hW9ruuFfHz — ErinSays (@ErinSays88) November 26, 2014

A newscaster got sprayed with pepper spray? #ATLFerguson