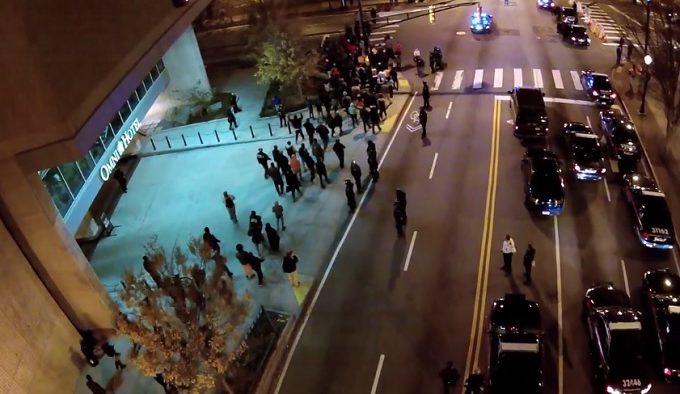 Atlanta is still dealing with some of the fall-out from protests that occurred Tuesday evening in response to events in Ferguson, Mo.

Many felt anger over what they believe was a flawed process that led to the non-indictment of Officer Darren Wilson, who is white, for shooting Michael Brown, 18, who was black. Brown and Wilson were involved in an altercation before the shooting, but witness accounts varied on many of the details surrounding what led up to it.

Protesters took to the street in several U.S. cities on Nov. 25, and more than 20 people were arrested in Atlanta, including two journalists. According to Max Blau, a staff writer with Creative Loafing, charges were dismissed against the two journalists, identified as Creative Loafing freelancer John Ruch and 11 Alive Photographer Tyson Paul. Ruch had been charged with disorderly conduct.

A reader who works for AmericanDroneIndustries.com, also used a drone to shoot this video of Tuesday’s protests.

Protests are expected to continue on Wednesday evening, Nov. 26.

The Society of Professional Journalists Georgia chapter has released this statement in response to the arrest of two journalists during last night’s protests in Atlanta. Decaturish editor Dan Whisenhunt will be joining the SPJ Georgia board in 2015, and helped craft this message.

ATLANTA, GEORGIA – A magistrate judge dropped the charges against two Georgia journalists arrested in the early morning hours of Wednesday morning as they were providing news coverage about protests in downtown Atlanta.

Tyson Paul, photojournalist from WIXA 11 Alive NBC Atlanta and John Ruch, freelance writer for Creative Loafing Atlanta, were both on duty in downtown Atlanta when the Atlanta Police Department took them into custody.

The Atlanta protests were sparked by the Missouri grand jury’s decision not to indict Ferguson police officer Darren Wilson for the shooting of Michael Brown.

According to WXIA 11 Alive Manager of News Gathering Kerry Browning, Paul was arrested on Interstate 75 in an emergency lane “while just doing his job.” Creative Loafing News Director Thomas Wheatley told WSB-TV’s Rachel Stockton in a live interview that Ruch was arrested while covering the protesters.

“Despite identifying himself as a member of 11Alive News and saying he was on the air, he was asked to put down his camera and was handcuffed. Video shot from both his camera and overhead helicopter footage clearly shows that he was neither impeding law enforcement efforts nor traffic. Audio recorded during his arrest also shows he was very respectful to Officer J. Hines and did not provide any resistance.

“When later taken to Turner Field for processing, another of our photojournalists was there and attempted to again assure law enforcement that Mr. Paul was a member of the press. He was subsequently told he had to leave and could not shoot video. The remainder of the night was spent securing bail and getting Mr. Paul released. Because of this arrest, two of our journalists were not allowed to fulfill their job requirements last night and we weren’t able to provide the coverage the Atlanta public deserved.”

Wheatley told SPJ Georgia’s Sharon Dunten that Ruch was working as a reporter for Creative Loafing but he was not wearing press credentials. Ruch walked with the protest march in downtown Atlanta around 3 a.m. Wednesday. As he and others protesters reached a human barricade of law enforcement officers, Ruch tried to take a photo using his smart phone. Ruch said the Atlanta Police officer immediately took his phone from him. He identified himself as a member of the working press, but was ignored and placed in restraints.

At 6 a.m., Wheatley helped Ruch post bail with help from the Georgia Civil Defense Fund. Wheatley said in the future credentials may be given to freelance writers working for Creative Loafing.

Deushane and the leadership of SPJ Georgia are requesting a meeting after the Thanksgiving holiday weekend with the Atlanta Police Department to discuss the rights of the working press in Atlanta and Georgia.

DeKalb County Chief of Police Dr. Cedric Alexander contacted media outlets last week to discuss how all law enforcement agencies were working together on the potential fallout from the Ferguson ruling, Deushane wrote.

Wheatley said Creative Loafing will be working on an editorial surrounding this issue in the next week’s paper.

The Society of Professional Journalists of Georgia is always concerned when law enforcement might encroach on violating of the Freedom of the Press during news breaking events.

As an organization who advocates for the First Amendment rights for professional journalists in Georgia, we do not condone the arrests of journalists working on any news story, whether it was breaking news or not.

SPJ Georgia believes in the U.S. Constitution which guarantees freedom of expression by prohibiting the government from restricting the press or the rights of individuals to speak freely.