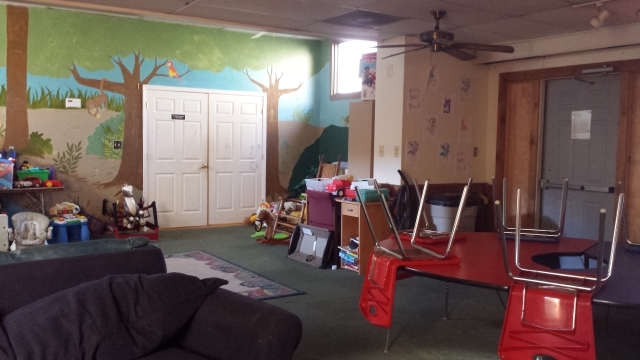 Children can read and play in the community room at Hagar's House Emergency Shelter in Decatur. Photo by Dena Mellick
Share

Children can read and play in the community room at Hagar’s House Emergency Shelter in Decatur. Photo by Dena Mellick

A new report has put the spotlight on child and family homelessness, and the situation is not good. The National Center on Family Homelessness (part of the American Institutes for Research) released a 130-page study that found 2.5 million children are now homeless each year in America, an 8 percent increase from 2012 to 2013.

The report says one in every 30 children in the United States is homeless – a historic high.

What’s more, the results show Georgia has a long way to go in preventing child homelessness. The state ranked 40th overall, barely avoiding being in the bottom 10. And it was ranked 49th out of 50 states when it comes to the risk for child homelessness. That ranking was based on eight risk factors including a state’s home foreclosure ranking, the birth rate for teenagers, and the percentage of children in poverty and without health insurance.

Homelessness prevention advocates in the metro area say this is a call to action.

Protip Biswas is Vice President of Homelessness and Community Outreach at the United Way of Greater Atlanta. The United Way partners with local non-profit organizations in the area.

Biswas said of the report, “It’s a shame that there’s been a huge growth. … What it tells me is that we all need to focus on families more, starting with the child.”

Sybil Corbin is the Program Manager for Hagar’s House Emergency Shelter, part of Decatur Cooperative Ministry, a partner of the United Way. Hagar’s House provides an evening shelter to homeless women and their children for up to 90 days.

Corbin said, “A lot of the attention these days is being focused on chronic homelessness and homeless veterans, and while that’s significant, it negates the importance of homeless women with children. … This is a population of people that definitely needs the attention … not just put on the back burner, and I feel like that’s what’s been done.”

Exact numbers about the number of homeless people living in the metro area are hard to come by. Biswas said estimates indicate on any one night, there are about 6,000 homeless people in metro Atlanta, which includes the City of Atlanta and DeKalb and Fulton Counties.

“Over the course of the year, we believe 12,000 to 16,000 people face homelessness,” Biswas said. “These are all estimates because it’s difficult to measure exactly how many are homeless, but many of them are actually families that are facing hardship, and they come in and out of homelessness.”

Since 2007, HUD has used the annual “Point-in-Time” (PIT) count to assess the number of homeless people on a single night in January across the nation. However, the report says the PIT count, “does not adequately estimate the number of individuals and family members who experience homelessness through the course of a year – especially children.”

Experts say the PIT count doesn’t look at families and children living in so-called “doubled-up” situations. Those families often don’t want to admit they are bunking with friends or family, because, for one, landlords might not be happy to learn about those situations.

Decatur’s Deputy City Manager, Hugh Saxon, believes the number of homeless in the City of Decatur is relatively low, but he said the number is likely higher in greater DeKalb County. The city does take part in the PIT count, but neither the city nor the Decatur Police Department maintains ongoing statistics on homelessness.

Decatur Police Sgt. Jennifer Ross said when the city took part in the PIT count in January of this year, it found only one woman with a small child and took them to a local shelter.

“When officers come across the homeless in Decatur, we are lucky to have access to a local shelter for women and children, many local organizations with programs and assistance, and services from the United Way,” Ross said. “We can usually provide rides to shelters, clinics, and facilities outside of our jurisdiction because we are not as inundated with calls for service as some larger agencies.”

Saxon said the city will refer people in need to Decatur Cooperative Ministry as well as Our House, another non-profit that supports homeless families. He noted that the city will also put homeless veterans in touch with the Veterans Administration.

What’s behind family and child homelessness? The report lists many causes such as:

– A lack of affordable housing

– Lingering impacts of the Great Recession

Biswas has observed that a potential barrier to focusing on family homelessness is that it is more expensive.

“It’s just a lot more challenging to help a family than it is to help an individual,” he said. “Lots of the traditional shelters or programs are targeted toward single folks. It’s just easier. You have one facility only with men, one with women, but when children are engaged, it starts becoming a complicated picture.”

In her work with homeless women and children, Corbin said she sees people who are living on the edge of homelessness and poverty, and they simply don’t have enough resources to keep from slipping over that edge.

“The common causes today seem to be the same as they were 25 years ago,” she said.

The report lists a number of solutions to the problem of family and child homelessness, including safe and affordable housing, education and employment opportunities, family needs assessments, trauma care, and treating depression in mothers, which has been found to have a profound impact on children.

“The particular norm with families is you have to address all their needs,” Biswas said. “The child has a different need from an adult. The adult needs a job. The whole family needs health checkups. The kids are underperforming in school, all of which are connected. So in order for a family to succeed, it needs a much more intensive amount of resources.”

The amount of work to be done may seem overwhelming, but Corbin and Biswas say the best thing members of the community can do is volunteer, especially around the holidays.

“In terms of trying to keep the shelter open for increased hours over these cold winter months, we need volunteers,” Corbin said. “We use volunteers for homework, to help with child care, and computer lab help. Volunteering is a vital part of the makeup of Hagar’s House.”

Biswas said, “I always tell people look at your neighbor, look at the agency that’s closest to you. … You don’t have to come downtown to feed homeless folk. You can bet there are homeless families in your community. So if you need the name of an agency that’s working in your community, call 211. 211 is our help service that United Way sponsors. … My advice to everyone is that everyone do something beyond their own family this holiday season. That will be a great way of making it a special holiday season.”