The City Schools of Decatur Board of Education and the Decatur City Commission participating on a Nov. 12 special called work session. Photo by Dan Whisenhunt
Share 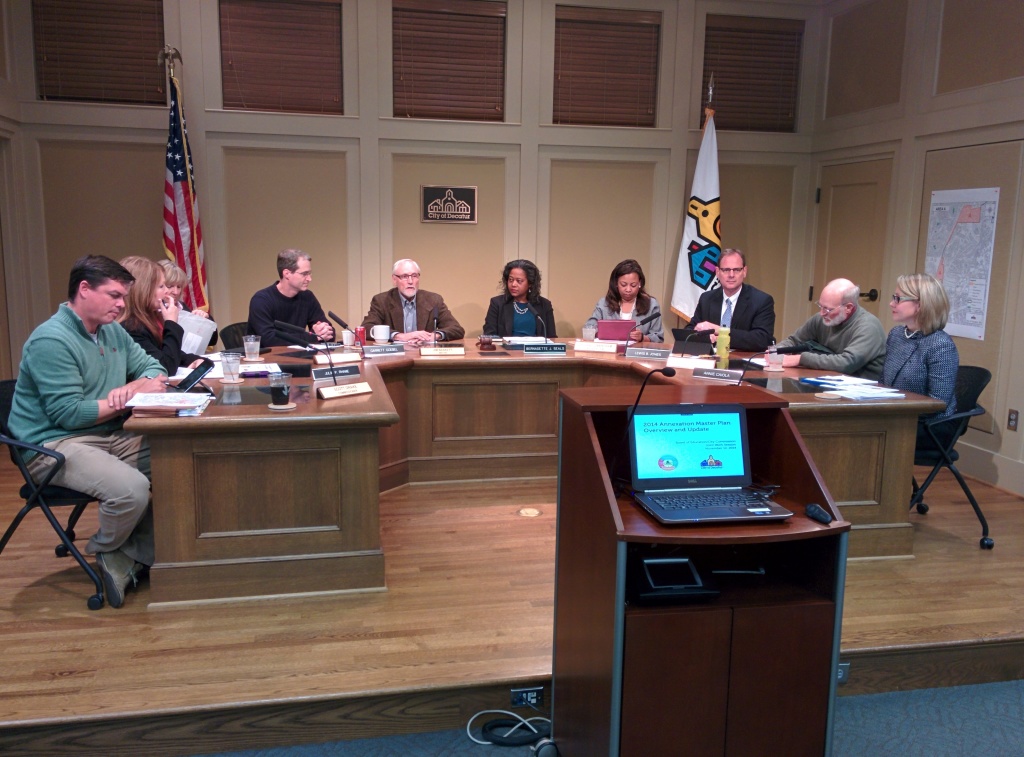 The City Schools of Decatur Board of Education and the Decatur City Commission participating on a Nov. 12 special called work session. Photo by Dan Whisenhunt

The Decatur School Board and the City Commission met this evening in a special called work session, and grappled with options for balancing school enrollment with the need for more commercial property.

The meeting between the School Board and the city commissioners was the result of a months-long discussion about both issues. The school system’s current enrollment is 4,336 students. A consultant’s report on enrollment estimates that the city’s school system will grow to 7,398 students by 2020 without annexation in a high-growth scenario. If the city is able to annex the 1.6 square miles in its current plan, it would increase that number by 747.

According to the report, if Decatur doesn’t annex property it will mean higher taxes for Decatur residents and operating deficits for the school system.

Growth options within the city are limited. Superintendent Phyllis Edwards some possible options are closing the College Heights Early Childhood Learning Center and turning it into a K-3 school. Another option is doing an addition to Glennwood Elementary and turning that addition into a CSD’s fourth and fifth grade academy, which would free up the 4/5 Academy at Fifth Avenue School building.

Edwards said that while there are no current plans for either of these scenarios,  they are “possibilities the school board is going to have to consider.”

While annexation would provide areas for new school facilities, it isn’t a universally popular idea. There are no guarantees that the General Assembly will approve a bill that will allow for a vote on Decatur’s plan. Residents can also file a petition to annex into the city. There’s no guarantee commissioners will approve those petitions, particularly if they are from neighborhoods that aren’t already in the master plan.

The city is working to complete its final annexation master plan by Dec. 1. Under that timeline, the School Board would consider a resolution in support of that plan on Dec. 9 and the City Commission would consider approving it on Dec. 15.

Decaturish is able to provide simultaneous coverage of tonight’s meeting and an annexation meeting in Avondale Estates thanks to the help of our subscribers.