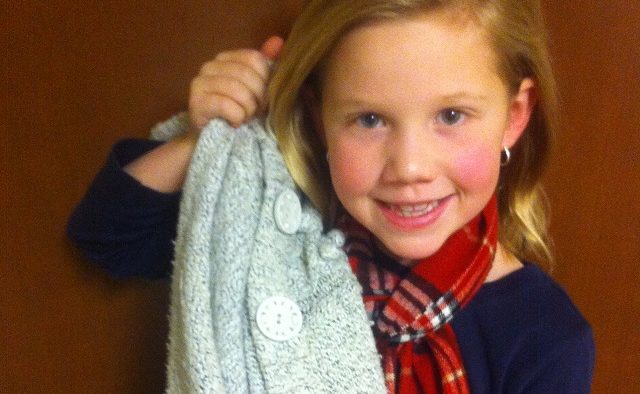 Lillian Lindsey, 7, said she became concerned when she learned that some senior citizens have trouble keeping warm during the winter.

“They don’t have enough money to buy coats,” the Clairemont Elementary Second Grader said. “So I decided to help them out and ask my school to help.”

Lillian led the charge for her school, teaming up the “Sweaters for Seniors” campaign, now in its seventh year.

Lillian said the response from her peers has been overwhelming. Her classmates and teachers are delivering V-necks, cardigans, pullovers, hoodies and lap blankets by the box-load.

“We filled up the box twice yesterday,” Lillian said. “My art teacher brought in some sweaters this week. I’m going to make an announcement that it’s ending this week.”

Her mom, Ginger, who described her daughter as “7, going on 27,” said, “People can drop off sweaters at Clairemont Elementary, 155 Erie Avenue until Friday, Nov. 21 and at GroupHousing, 125 Clairemont Ave., Suite 210, (Cornerstone Bank Building) until Dec. 12. All sweaters will be delivered by Lillian and her Clairemont classmates to Briarcliff Haven & Rehabilitation Center the first weeks of December.”

Lillian, an avid swimmer and ballerina, said she wants to be a doctor when she grows up.

She said she’s doing this, “Because I like helping people.”