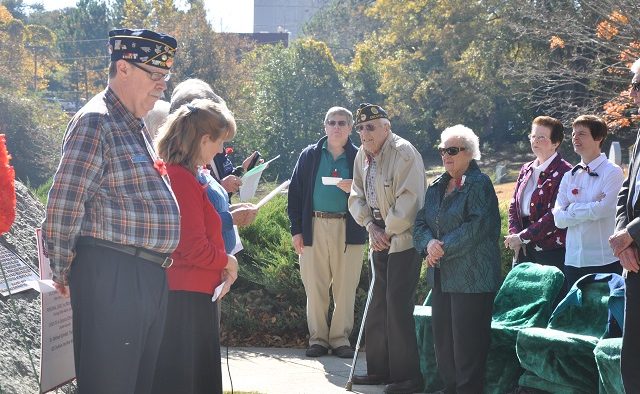 A veteran struggles to stand during a Veterans Day ceremony at the Decatur Cemetery on Nov. 11, 2014 - File Photo by Dan Whisenhunt
Share 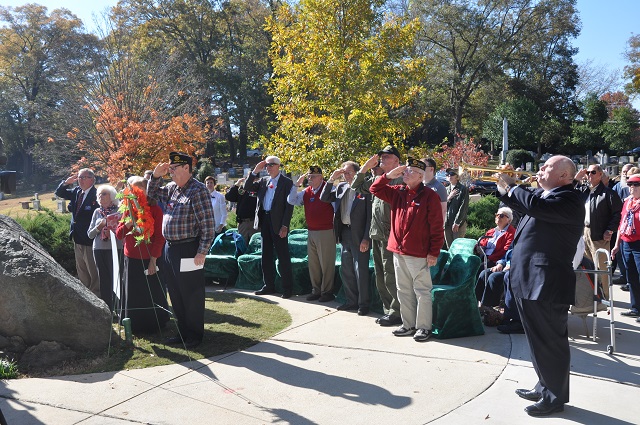 Michael Schmidt plays taps during a Veterans Day ceremony at the Decatur Cemetery on Nov. 11. Photo by Dan Whisenhunt

Veterans Day began as Armistice Day, which marked the end of World War I. At the time it was called the Great War, “the war to end all wars.”

But war never ended. It continues to this day.

Anyone who has forgotten our nation’s conflicts, and the sacrifices of the people who served in our military, only needed to drop by the Decatur Cemetery on Nov. 11 during a bright Tuesday morning. There, service members representing different branches of our armed forces and the wars they’ve fought over the last 75 years, squinted in the sun as they looked up to the flag they swore to protect.

Doreen Henricks with the ladies auxiliary of American Legion Harold Byrd Post No. 66 in Avondale helped to organize Tuesday’s ceremony, in partnership with the Friends of the Decatur Cemetery. She comes from a family of veterans, and has some regrets about not following in their footsteps.

“I feel it’s important to recognize their service in some small way,” she said.

Former Pfc. David Peak served in the Army during Vietnam. He said he doesn’t like to read the news about our ongoing conflicts in places like Afghanistan. He still struggles with his own experiences.

“None of us were supposed to come back,” he said. “We were all expendable.”

A veteran struggles to stand during a Veterans Day ceremony at the Decatur Cemetery. Photo by Dan Whisenhunt

But Peak came back, and so did the rest of the men who gathered among the graves of nearly 1,000 veterans at the Decatur Cemetery.

Veterans Day is about tribute to the soldiers living among us but is inextricably linked with the price their friends paid for our freedom. They could not have returned to a free country without their sacrifices and the sacrifices generations before them.

Michael Schmidt played taps to close things out and the veterans headed back to the Legion Post for lunch.

Henricks stayed behind to gather up a few things. What does Veterans Day mean to her now, at this moment in history, as we continue to fight wars large and small that never seem to end?

She thought on it for a moment and recalled the story of a man whose draft number was 43, which meant he was almost certainly headed to Vietnam, but less certain he would return. The draft is no longer used, and our military today is all volunteer.

“Many of those people volunteered because they felt it was important,” she said, adding later, “As long as there are wars, there’s going to be men and women who go (into the) service.” 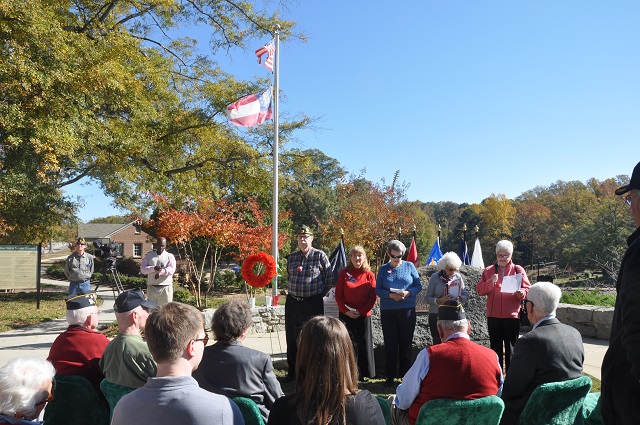 Members of the American Legion Post in Avondale Estates paid tribute to our veterans during a ceremony at the Decatur Cemetery on Nov. 11. Photo by Dan Whisenhunt