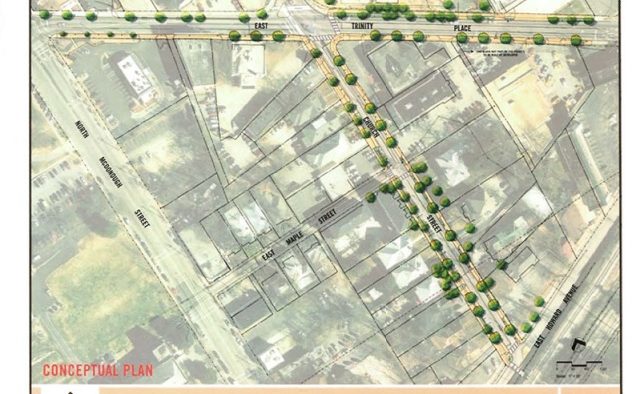 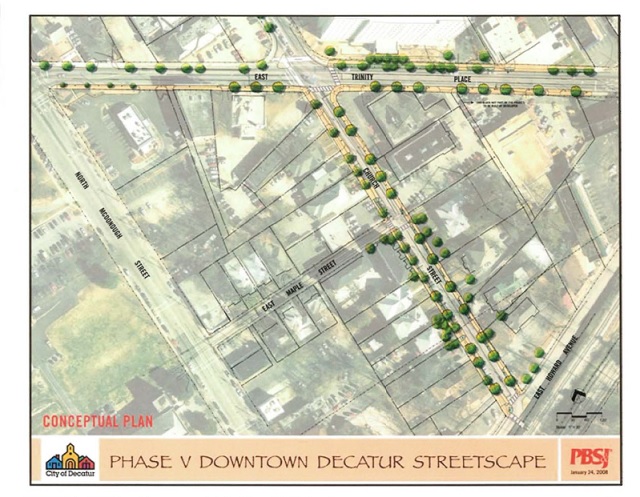 This map shows the location of the Phase V downtown streetscape improvements. Source: City of Decatur

Decatur’s City Commission will consider awarding an approximately $900,000 construction contract for the final phase of its downtown streetscape project.

Construction on the last two phases, IV and V, is expected to begin in 2015. City Schools of Decatur will also renovate Decatur High in 2015 to accommodate more students.

The recommended construction budget is $1.6 million, $590,000 of which comes from a Georgia Department of Transportation grant. The rest comes from the city’s capital projects funds and from a $16.4 million bond issue approved in 2006. It is one of two remaining bond-funded projects. The other is the Oakhurst Streetscape improvements. Commissioners awarded a $1.4 million construction contract for that project back in October.

Phase V construction is expected to take about 12 months.

While that’s going on, the city will also be working on Phase IV, which involves improving North McDonough, which runs in front of Decatur High. That $2 million project is being funded with grant money from the Atlanta Regional Commission’s Livable Centers Initiative. It’s expected to begin in June. The city will shrink the road from four lanes to two in order to make it friendlier for bicyclists and pedestrians.

City Commissioners will consider voting on the Phase V contract on Monday, Dec. 1. The City Commission meeting starts with a work session at 7 pm. The regular meeting starts at 7:30 pm. It will be held at City Hall, located at 509 North McDonough Street. All meetings are open to the public.