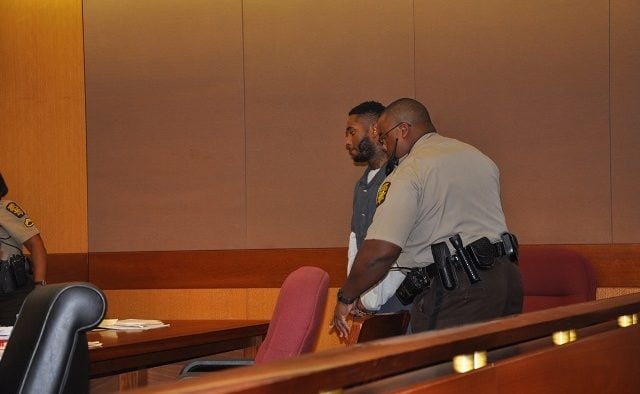 Joseph Alan Lewis is escorted by a bailiff during an Aug. 1 hearing in Fulton County Superior Court. Photo by Dan Whisenhunt
Share 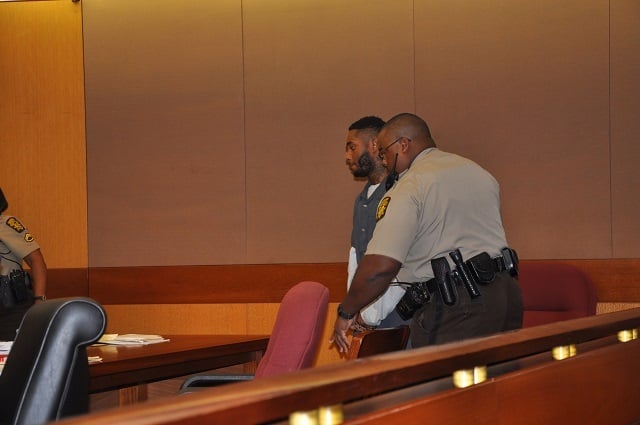 Joseph Alan Lewis is escorted by a bailiff during an Aug. 1 hearing in Fulton County Superior Court. Photo by Dan Whisenhunt

The man accused of intentionally running down a cyclist in June has new legal representation and a new defense strategy.

There was a bond hearing for Joseph Alan Lewis in Fulton County Superior court on Nov. 4. Lewis is accused of intentionally running over cyclist Greg Germani on June 9. Germani was riding his bike on Flagler Avenue in Atlanta’s Piedmont Heights community. He suffered a severe brain injury and is still in rehabilitation.

Lewis’ new attorney, Dwight Thomas, showed up to the hearing. He has name recognition in legal circles. His clients include rapper T.I., who has employed Thomas since 2003. Lewis, who moved to Atlanta from Michigan, is an aspiring musician. He is pleading not guilty to charges that include criminal attempt to commit murder.

Judge Todd Markle heard arguments from Thomas and Assistant District Attorney Lance Cross about whether or not Lewis should be granted bond. Cross argued that Lewis poses a flight risk and recommended that he remain in jail until his trial. Thomas countered that the case hinges on whether prosecutors can prove Lewis intentionally hit Germani, according to people familiar with the hearing. This implies that Thomas may argue that Lewis accidentally hit Germani.

That would be a different approach than the one used by Lewis’ previous attorney, public defender Overton Thierry. During a hearing in August, Thierry suggested that the prosecution couldn’t prove anything to a certainty beyond proving his client owns the Dodge Nitro used in the attack.

Attempts to reach Thomas for comment have been unsuccessful.

Cross told Decaturish, “The defense argued that this was an accident. The State argued this was clearly an attempted murder, that the defendant purposely ran over Mr. Germani. We further stated that the evidence at trial would be clear that, after he tried to kill Mr. Germani, the defendant tried to hide evidence by taking the plate off of his SUV and purchasing a car cover to cover it with.

“The State argued that the defendant would definitely flee the jurisdiction if released.”

During the August hearing, an Atlanta Police detective testified that Lewis flew to Las Vegas in the days after the incident and abandoned his apartment in Midtown.

According to Cross, Lewis’ mother, who lives in Michigan, testified on her son’s behalf.

“She stated they had already paid rent on an apartment for him to live in in Atlanta and that they would ensure he came to court,” Cross said. “However, his parents and all the rest of his family resides in Detroit leaving him with no ties here. Additionally, he has no job here.”

Germani’s girlfriend, Beth Anne Harrill, spoke at the hearing and urged the judge to keep Lewis in jail.

Judge Markle is expected to rule on the bond request within the next few days, Cross said.

A grand jury formally indicted Lewis on Oct. 10. There’s still no news on the status of the other defendant in the case, Shanelle Woodard.

Woodard, Lewis’ girlfriend, is accused of helping him cover up the crime. She’s charged with tampering with evidence and hindering the apprehension of a criminal.

Clarification: Decaturish has attempted to reach out to the family members and attorneys of the defendants for comment about this case. Someone called several weeks ago asking for information about an upcoming hearing, and indicated they were affiliated with one of the defendants. They declined to comment.