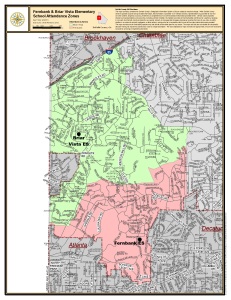 Annexation map proposed by Together in Atlanta. (Click to enlarge.)

The Druid Hills Civic Association wants to stay neutral on the question of whether the neighborhood should be annexed into Atlanta.

But the Civic Association supports putting the question to a vote.

On Nov. 19, the DHCA Board approved a resolution recommending a referendum on whether the neighborhood, including the communities surrounding Briar Vista and Fernbank Elementary, as well as Druid Hills High School, should be annexed into Atlanta. If it’s successful, it would mean students of other schools that feed into Druid Hills High, like elementary schools in the Laurel Ridge Shamrock Neighborhood and Avondale Estates, would remain with DeKalb County Schools and be rezoned to another high school.

A group called Together in Atlanta is spearheading that effort, but it is a separate organization from DHCA.

The map proposed by Together in Atlanta encompasses the neighborhoods of Druid Hills and North Druid Hills. The map includes Emory University and the Centers for Disease Control.

A recent survey of Druid Hills residents showed the idea of annexation wasn’t overwhelmingly popular. According to the results, 28 percent of respondents strongly agree with the idea, while 28 percent strongly disagree.

The DHCA board wrote:

Please understand that this is a two-part process. The DHCA is not advocating that annexation should occur. We are advocating that our residents have the opportunity to make that choice. Given the roughly equal split of opinion indicated by our survey, it would be inappropriate for the DHCA to take an advocacy position on this issue. Adopting either side — remain unincorporated or annex — would be abdicating our responsibility to represent the neighborhood as a whole.

We have heard and seen numerous comments to the effect that DHCA has adopted a pro-Atlanta stance. We believe that this is due to the fact that much of the information published on our website looks favorably toward Atlanta. This, in turn, is due to the fact that there are groups of neighbors that believe Atlanta is the best option and have been providing the information to DHCA for publication. Despite our calls in the past, no advocacy group for unincorporated DeKalb has identified itself to date. Consequently, little material has been provided on this option for publication.

The annexation push is being driven by several different factors. Members of the Together in Atlanta organization were part of a larger effort to form a Druid Hills Charter Cluster. When that effort failed, some of the former members of the charter cluster group began to push for annexation into Atlanta. The other reason for the annexation discussion is a proposed city of LaVista Hills. The new city would have about 72,000 residents. Its map overlaps with a portion of Together in Atlanta’s map and it overlaps with a portion of a map for the proposed city of Tucker.

To help everyone keep track of the boundary disputes, Decaturish.com commissioned this custom map showing the overlapping city and annexation proposals. This map will be updated as needed.