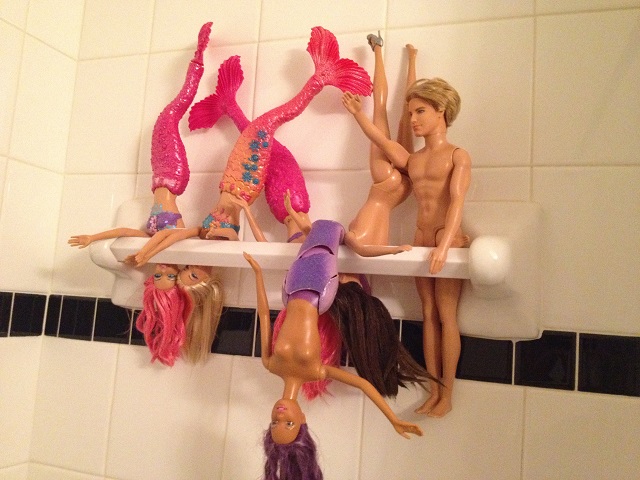 Another Barbie controversy unfolded last week. Another one. For the love of all things sacred, she is not human. She’s a toy. I want people to leave Barbie alone.

Sure, the book “Barbie: I Can Be a Computer Engineer” was a tragic mistake of Shakespearean proportions. It was. This misogynistic story suggests that Barbie cannot be a computer engineer. This is not Barbie’s fault. I bet the person who wrote the book never owned a Barbie. Blame that person. Blame Ken. Tell him to get a job.

Blame Captain Kirk. Nothing about his life is realistic.

I loved my Barbies. They were hand-me-downs from my sisters. My first brand-new Barbie was Christie. She was black and a supermodel, and she came with a camera. If you pushed a button on her back, she’d strike a pose. I loved her. I loved all my Barbies, blonde and blue-eyed and with that incredible thigh-gap. It didn’t matter to me.

Barbie was make believe. In my real life, I spent my time digging in my backyard. I liked bugs. I mowed the lawn. I knew how to edge and reseed the grass. I knew how to trim the shrubbery. I liked Alfred Hitchcock movies and “The Twilight Zone” and “Star Trek” and cowboy books by Louis L’Amour. There were a lot of male influences on me from a young age. Bionic men, motorcycle cops, or good old boys driving cars with doors that didn’t work. Barbie was a godsend.

Barbie was better than all those men. She was a doctor, veterinarian, rock star, and astronaut. She got $hit done, and she got it done while wearing stilettos. Ken never did anything. My Barbies found his presence distasteful. My Barbies didn’t need Ken. She didn’t need Captain Kirk either.

Captain Kirk can’t be a computer engineer even though he’s from the future. He’d ask Sulu for directions and make Spock code. But nobody ever complained about Kirk being unrealistic or incompetent. He isn’t a real person. And who wants reality? I like my Kirk the way I like my Barbie. Imaginary.

Kirk needs to be a better role model. He tries to mate with every alien woman he meets. He fails to value intelligence in women. Does he know what a dilithium crystal is? Kirk gets the Enterprise out of danger by using everyone else’s skills on the ship. He is just a pretty boy figurehead leading us on intergalactic adventures that ultimately culminate in success. If I wanted reality this would be preposterous. Do we want our heroes to be as spirit crushing? Do they need to be realistic?

No one gets mad at Kirk. No one hates James Bond. No one complains that he’s got a drinking problem. He’s an international spy wearing a tuxedo? I would pretty much notice him if he walked into my casino. He is handsome and fit with his exotic accent. Now my son feels inadequate. He wants his hot chocolate shaken, not stirred. He will never become a waif, British, gadget-carrying hero. My son cries himself to sleep at night thanks to Bond. James Bond.

I do have a few complaints about Barbie. She contributed to my naiveté lasting longer than it did for other girls. When I learned about sex my first thought was, “That’s not how my Barbie had sex!” What goes where? Ken and Barbie had the same anatomy except the boobs. Let’s be clear, what Barbie had were not breasts. There were no nipples. I figured my breasts would grow into something Barbie-like as I matured. But no, the nipples did not fall off. They stayed. When I had babies, these breast-nipples things worked in ways Barbie had not prepared me for. Not only is there a spout, but there is a showerhead-like spray. Of milk. Barbie should have told me.

My kids have hand-me-downs Barbies from their cousins. These kids will become engineers or rock stars if they want to. I want them to be smart enough to become who they should be. I want them to understand the difference between real and imaginary influences. I’d rather not blame their failures on a plastic doll from 1950 or an oversexed space captain from the year 2200.

The people who hate Barbie probably never had one. Barbie is not perfect. She can’t wear flat shoes. It’s difficult getting her rigid body in and out of her wonderful outfits. Her hands are stuck in the Vulcan greeting. This explains my crush on Spock and why I blame everything wrong in the world on Kirk.