The store front of Jeni's in the Decatur Square. Photo by Dan Whisenhunt
Share

The store front of Jeni’s in the Decatur Square. Photo by Dan Whisenhunt

When the sweet smell of waffle cone spilled out of Jeni’s Splendid Ice Creams and onto the Square for the first time earlier this month, dozens of people had already formed in a long, meandering line that would test anyone’s commitment for dessert.

“I’m not waiting in a line for ice cream,” one passerby said incredulously after inquiring about the cause of the line.

But wait many did. People filed in one by one to sample the spread before choosing among flavors like Goat Cheese with Red Cherries, Rum Ball and Wildberry Lavender.

The new Jeni’s store, which is now one of three in the Atlanta area, opened where a frozen yogurt store briefly existed.

Just this year, at least three artisan-style ice cream businesses have popped up in the Decatur Square area: Butter & Cream, Jeni’s and Queen of Cream, which sells from a cart that has also made cameos all over the Atlanta area. 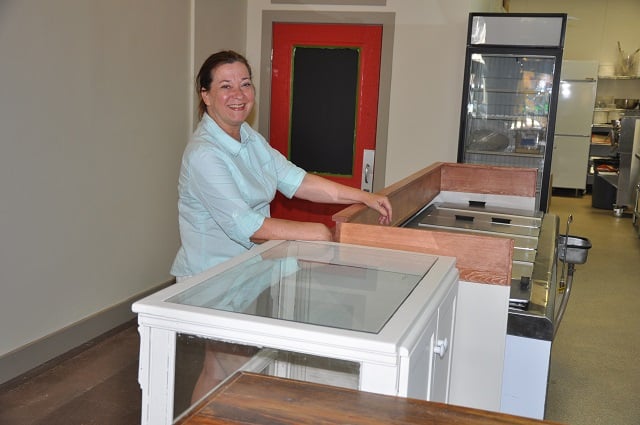 Stacy Wisniewski stands inside her new store, Butter and Cream, on Church Street in Decatur, Ga. The store is set to open next month. File Photo by Dan Whisenhunt

The tide seems to have officially receded on the frozen yogurt craze and given way to the artisan ice cream movement. Some credit the Jeni’s founder as being a pioneer. Jeni’s, by the way, also has frozen yogurt options, offering up complex flavors like Lime Cardamom Buttermilk frozen yogurt.

As Jeni’s was christened that evening, Butter & Cream was doing swift business no farther than a block away. Jeni’s may have had free scoops and a limited-edition print for the taking, but locally owned Butter & Cream had the bubbly.

Butter & Cream, which opened in July, offered champagne and sorbet as part of Decatur’s “Terrific Thursday” campaign for local retailers during the holiday shopping season. Stacy Wisniewski describes her ice cream as familiar but with a twist. Some of her more exotic flavors include Cashew Crème Brûlée and Pumpkin Streusel, and she recently collaborated with Decatur’s Three Taverns Brewery for a Milk Chocolate Stout flavor.

While the two ice cream shops worked the crowds, the nearby Yogurt Tap – one of the first and last bastions of frozen yogurt in Decatur – was having a slow night.

Sam Lewis, who is a manager at the store, has watched as the frozen yogurt trend peaked over the last couple years before waning recently.

“Nothing lasts forever,” Lewis said. “People go on from one fad to another … I think we survived because Decatur is really loyal.”

The owners, who live Decatur, create their own recipes at home in their kitchen. They have a tendency to hire local artists. Lewis is a vocalist and rhythm guitarist for a band, Howling Star. Their frozen yogurt is made fresh daily on site.

Jeni’s may not be locally owned, but it clearly makes an effort to ingratiate itself to the community wherever it goes. When customers finally reached the door on opening night, founder Jeni Britton Bauer was there to greet them individually, casually saying “Hi, I’m Jeni.”

The growing company has built quite a following along the way since its start in Columbus, Ohio, in 2002.

“I was the original Jeni’s fan,” boasted Sarah Mosby while waiting in line with her friend, Melissa Monte. A Cincinnati native, Mosby grew up on the company’s unique flavors. Good grades and special accomplishments were rewarded with trips to Columbus for Jeni’s, and when Mosby left home for her first year at Emory University, her mom mailed her four pints of Jeni’s ice cream on dry ice for the homesick freshman’s birthday.

The two arrived more than an hour early for the “free ice cream party” at Jeni’s so they could be the first patrons of the new Decatur store. They succeeded.

It’s not time to write the obituary for frozen yogurt just yet, though. Susan Linton, who founded the International Frozen Yogurt Association at the height of frozen yogurt’s popularity in 2013, said the market’s recent cooling off is a natural part of the industry’s maturation.

This latest iteration of the frozen yogurt love fest emerged about seven years ago in California, but it has fallen in and out of vogue no fewer than three other times since its birth in the 1970s. Over the decades, it’s gone from tangy to super sweet to tangy again.

It’s often heralded as a low-fat alternative to ice cream, and for the Yogurt Tap, it’s this aspect that attracts many of its repeat customers, with some of them even using the creamy goodness as a meal replacement, Lewis said.

Until the spring brings back robust days where the store is churning out as many as 35 batches of frozen yogurt daily, sales typically drop 60 percent during these colder months, Lewis said. The shop will rely on their habitual consumers, college students who seem impervious to the cold and a mix of seasonal flavors – Sweet potato pie or cranberry, anyone? – to pull it through the winter sales slump.

“If everyone brings something a little different, then there’s room for everybody,” Lewis said.

Still, there’s a whole lot of ice cream right now in Decatur. Lewis and several people waiting in line for Jeni’s said they were concerned about the effect Jeni’s might have on Butter & Cream, but Wisniewski says not to worry over her.

She says her business reflects the independent, proudly-local spirit of Decatur and her ice cream can hold its own, thank you.

“We make everything on site. We’re small. We’re local. We hire kids from the community. I’ve been in Decatur since 1994. We’re just Decatur,” Wisniewski said.

“People are nesting right now. Once they get used to the cold, they’re going to get cabin fever and they’ll be back out.”

When they do re-emerge, will they all scream for fancy ice cream?