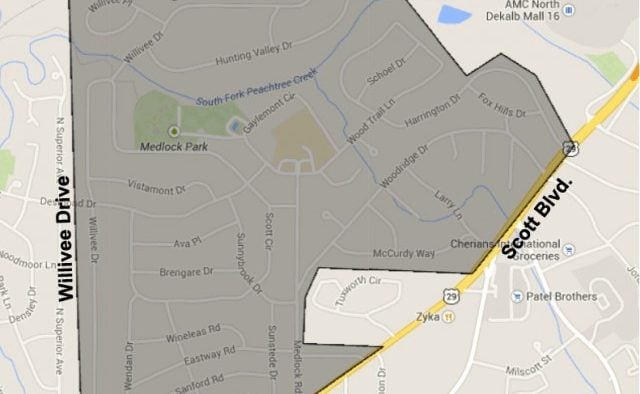 Medlock isn’t in Decatur’s annexation plan, though some early survey results show 66 percent of 224 respondents want to join Decatur. But city officials have warned off neighborhoods who aren’t in the city’s plan. Decatur officials believe more residential property will put too much strain on the city’s school system. A recent study of enrollment published by City Schools of Decatur suggests the city will face capacity issues unless Decatur annexes more property.

Decatur is primarily looking for more commercial property. It’s got its eye on revenue-rich parcels like Suburban Plaza that Medlock wants on its annexation resume. Without the commercial property, the proposed new cities might be reluctant to include Medlock in their maps, leaving 1,300 home neighborhood an unincorporated island in DeKalb County.

During a City Commission Meeting on Nov. 3, Baskett said, ” … These people that were here tonight who live in some of those areas who were saying we want to stay in the county of DeKalb seem, to me, to be burying their heads in the sand.”

MANA called out Decatur’s mayor over his “heads in the sand” remark.

“As of right now, Medlock Park and nearby neighborhoods are not known to be in any map other than the unincorporated DeKalb map,” MANA wrote on its website. “Thus, ‘these people’s’ heads are not ‘in the sand’ but rather, held high as they call out City of Decatur’s unreasonable annexation proposal… just like City of Decatur residents would be justified in calling foul if unincorporated DeKalb or a new city reached inside Decatur’s existing borders to cherry-pick commercial property.”

The MANA post also says recent public statements from the city don’t match up with what Baskett told neighborhood reps during a private meeting. The city published a letter written by the city manager and city school superintendent. The letter says the city must take in more land to “stabilize and minimize future tax increases.”

“During their meeting with MANA leadership, representatives from City of Decatur insisted that their annexation map is not about money, it is about protecting the city’s ‘gateways’ and being mindful of overburdening their school system,” MANA’s letter says. “It is good to finally hear Decatur admit that it has concerns about its ability to sustain the quality of its brand, namely, the ‘value’ they can deliver vs their tax rates.”

To read the full response from MANA, click here.