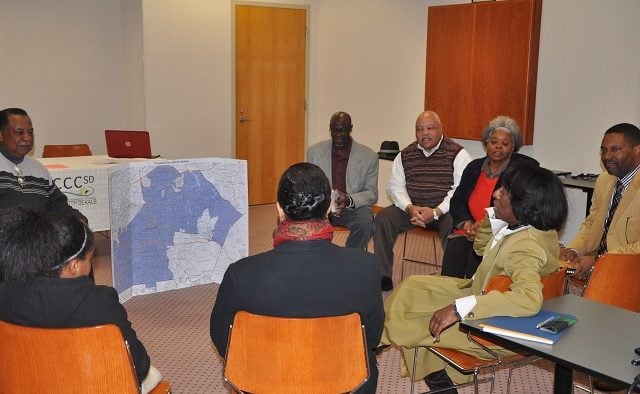 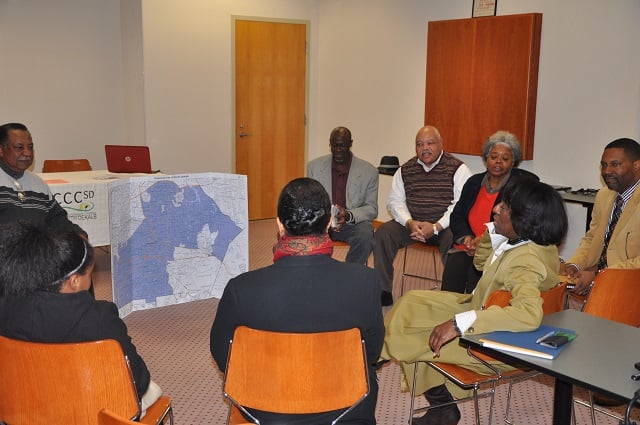 Members of Concerned Citizens for Cityhood for South DeKalb met at the public library in Clarkston on Monday, Nov. 17. Photo by Dan Whisenhunt

Throughout the discussion about creating new cities in north and central DeKalb County, there’s been one potential new city that’s flown beneath the radar.

But this city, which would encompass most of unincorporated South DeKalb County, would be the second largest in Georgia with nearly 300,000 residents. The proposed map would include everything in DeKalb south of U.S. 78 up to I-285, excluding a proposed city of Stonecrest, and everything south of Memorial Drive on the other side of 285. 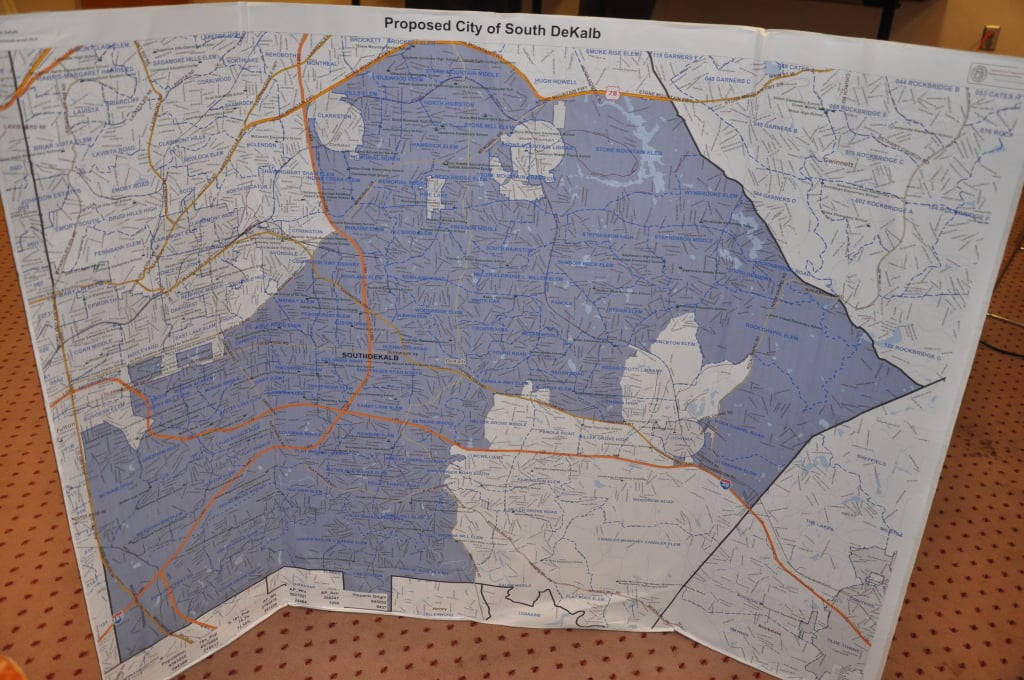 This is the proposed map for a City of South DeKalb. Click to enlarge

– Candler City – Named for the major thoroughfare in south DeKalb

-Haven- A reference to South DeKalb’s cultural diversity. “The county has also become a haven for African, Iraqi, and Latino asylum seekers,” a handout on the proposed city says.

– New Phoenix – A nod to a potential rebirth for South DeKalb

– New Africa City – “The population is predominantly Black and originally comes from Africa,” one of the handouts notes

– New DeKalb – Another nod to a rebirth of South DeKalb

– Freedom City – “Freedom from the shackles that bind us,” the handout says.

The city doesn’t have an official name, but it does have advocates. Concerned Citizens for Cityhood for South DeKalb has about eight members on its board and is working on a feasibility study for the city.

A group of 10 people, mostly CCCSD board members met at the public library in Clarkston on Monday, Nov. 17. The turnout was lower than expected because the location wasn’t settled until recently. There was also a lack of publicity, and a lack of media attention in general about the South DeKalb cityhood movement.

CCCSD President Kathryn Rice said that her group formed in June of 2014 and is a little late to the party in comparison with the movements behind LaVista Hills, formerly Lakeside and Briarcliff, and Tucker. She said that’s part of the reason news about the movement has been scarce, though the potential for a new South DeKalb city has been discussed in local meetings about annexation.

“I think because we started late, we were doing our analysis and determining what was the best option to take, and setting up the structure once we decided we needed to take action,” Rice said. “The major newspapers are the ones who have not focused or learned about this. I think in South DeKalb the word is starting to get out more and more.”

The new cities that have formed, like Dunwoody and Brookhaven, aren’t required to support those pensions, something state Rep. Mary Margaret Oliver mentioned during a recent interview. If the rest of DeKalb County incorporates, that could potentially shift the debt burden onto South DeKalb residents. CCCSD estimates the costs for unincorporated residents could increase from $91 per person to $141 per person.

Rice said UGA’s Carl Vinson Institute of Government is conducting a feasibility study, but she suspects that the proposed city won’t have enough commercial property to be considered “economically viable.”

“Homes in South DeKalb have been so devalued … it has made feasibility a lot more difficult, because we don’t have as much commercial development,” Rice said. “I can’t say we will pass the feasibility study.”

Even so, cityhood something Rice and other members of CCCSD think is worth going after, precisely because there’s a lack of economic development in their part of the county.

“I can’t buy ink for my printer in my home office anywhere in South DeKalb,” Johnson said.

CCCSD Vice President Isaac Finley said economic development is the “seed” for South DeKalb and, “We’re taking it and planting it in the soil of cityhood.”

The group also believes the area has some distinct economic advantages. It’s closer to the airport, for one. It’s also served by MARTA. A new city would make it possible for residents to elect a mayor, an elected official whose sole focus is serving South DeKalb residents.

“However we anticipate taking on others as we assess the situation and are able to handle it financially,” Rice said. “Our aim is to be fiscally conservative, to be fiscally sound.”

She said there isn’t a South DeKalb city bill yet, but said state Rep. Rahn Mayo, D-Decatur, is supportive of the feasibility study.

So would a legislator sponsor a cityhood bill for South DeKalb, even if the Carl Vinson study doesn’t deem it economically viable?