A Secret Garden in Kirkwood

A Secret Garden in Kirkwood 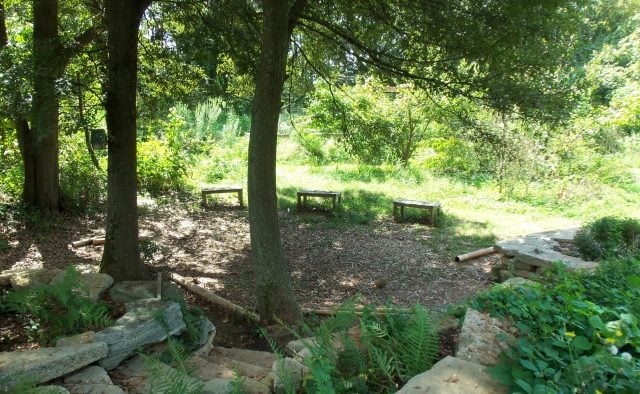 Volunteers used illegally dumped scrap concrete to create a terrace and steps in the garden. Photo by Dena Mellick
Share 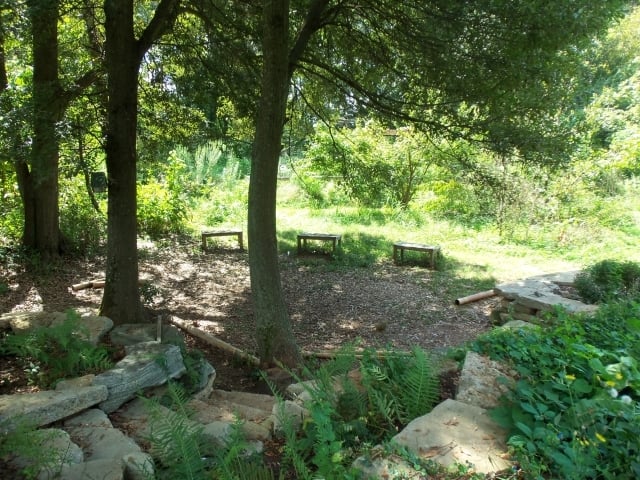 Volunteers used illegally dumped scrap concrete to create a terrace and steps in the garden. Photo by Dena Mellick

It used to be an illegal cement dumping ground.

Kirkwood’s Urban Forest Preserve is the neighborhood’s own secret garden, tucked away in the midst of the city.

“Because of its visual separation from everything urban, it has an oasis quality,” said Earl Williamson, the environmental chair for the Kirkwood Neighbors’ Organization (KNO).

The urban oasis consists of 7.5 acres of land, and the Audubon Society has certified it as a Wildlife Sanctuary. It includes a butterfly meadow of native Georgia grasses, a fruit and nut orchard, a lush pond, and a community garden.

The hidden preserve didn’t just appear out of nowhere. It’s the result of thousands of volunteer work hours. The City of Atlanta acquired the land through the Georgia Greenspace Program and a Georgia Forestry Commission program around 2005.

The butterfly meadow was built on a plateau of thousands of tons of illegally dumped concrete scrap.

“We created a meadow by around 800 cubic yards of wood chips. Another 50 cubic yards of compost. Some natural silt,” Williamson said. “We kind of mixed everything together, spread it out, and let the wood chips rot for close to a year. That turned into soil, and then we planted using plugs, and that’s why we have a meadow instead of a rock plateau.”

Around the edges of the plateau are terraced walls created from recycled concrete scrap topped by a stone throne fit for an elven king.

Less mythical than practical, the terrace helps guide erosion run-off out of the garden. Similarly, the tropical-looking pond acts as a catch basin to hold water that was causing erosion.

On the other side of the plateau is a newly-built covered pavilion.

Volunteer Roby Greenwald came up with the design based on his work with the Peace Corps. He said contractor designs fell through because of the challenges created by that bed of scrap concrete.

“That took a lot of work … but it really increases the usability of the park for gathering, so I’m really proud of that,” Greenwald said.

Hooks in the shaded structure beckon for someone to hang a hammock on a sunny weekend day.

Williamson said Trees Atlanta has been a major partner in transforming the nature preserve, helping to create the butterfly meadow and recently planting some 300 to 400 trees and shrubs in the forest space. The forest was also used as an illegal dumping ground before the volunteers started tending it.

“Some of the things we‘ve cleared out of here have been the front-end clip to a ton-and-a-half truck, a blown safe – those are our two great archaeological digs,” Williamson said.

While the Kirkwood Urban Forest has improved much from the overgrown mess that it was, organizers still have many plans for the preserve.

A pedestrian bridge over Hardee Creek is in the works that would provide access from Clay and Rogers Streets.

And organizers want to create a network of trails through the forest so community members can walk their dogs. But they also want the community to know about the many resources that are already available – like the community garden that was installed in 2010 with help from Park Pride.

“We want to provide a resource for community members who don’t have access to a garden spot in their own yard or perhaps they don’t have a yard because they live in an apartment,” Greenwald said. “Or perhaps they have a yard that is shaded by the magnificent canopy we have in Atlanta and they can’t grow a garden in their own yard. So we have a plot here they can easily access.”

“Eventually there will be a sign there that announces it’s the entrance to the park … and people will realize that is a park there,” Greenwald said.

Additional Kirkwood garden expansions include the Wylde Center’s plans for another community garden.

It comes as conversations ramp up in neighboring Decatur about the importance of greenspace. The proposed high school expansion plans include bulldozing the DHS Community Garden, to some community members’ dismay.

Both Williamson and Greenwald have seen the importance of greenspace in Kirkwood. They say they’ve witnessed how the Kirkwood Urban Forest has brought the community together as neighbors worked side by side to transform a previous cement dump into a hidden gem.