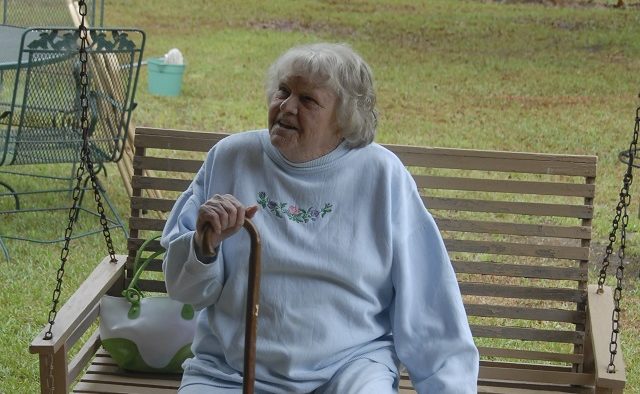 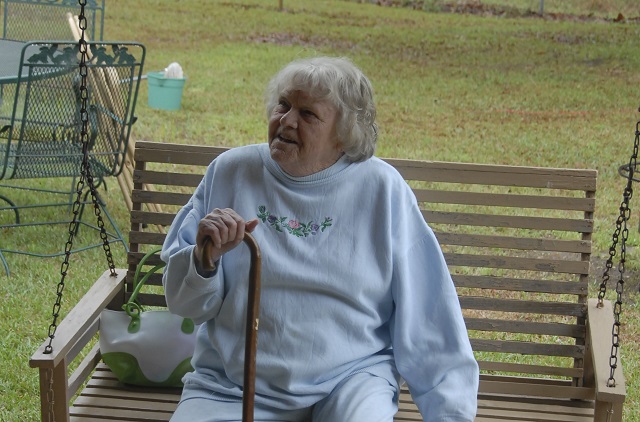 Editor’s note: Lovie was my wife’s grandmother. She died one year ago this month. I gave this eulogy at her funeral.

I didn’t know Lovie as long as most of you here. I first met her 10 years ago, when my wife and I began dating.

I loved hearing Lovie talk. Whenever she opened her mouth, you knew things were about to get real.

About a year and a half ago, as I noticed her health was beginning to decline, I said, “I really need to write some of this down.”

So I interviewed Lovie for about two hours and I took pretty good notes. It was a good interview. I feel like she pretty well summed up who she was and what she was about. As we get ready to say goodbye one final time, I’d like to share a few of her thoughts on living and dying.

This is probably a more PG-version of Lovie than some of us are used to, but aside from the family friendly edits, I’ve changed little else.

Lovie was born in 1930 into a life of hardship that’s almost unimaginable to many of us sitting here. She was the daughter of a sharecropper and her family picked cotton. She showed me a black and white picture of her brothers and sisters.

“There was eight of us, Audrey and Wesley, Mattie and Annie was the twins and then Sarah and then me and then Jasper was that baby the one in the picture there … back then all women had babies, gobs of ‘em. Didn’t have nothing to keep from ‘em.”

Lovie went to school, but she told me, “I wasn’t too smart in school.” In the sixth grade, she started playing basketball. “I was on first string,” she said.

Lovie voted in every election she could, as long as she was able. She remembered a time when it wasn’t easy for a woman to do that.

“I still vote, if I’m able,” Lovie said to me. “My momma? My daddy had to go back and pay poll tax back pay so she could vote.”

She raised the kids and crops at her house in rural Alabama, while her husband, Raymond, went to work.

“One year I pulled six acres of corn by myself,” Lovie said. “I worked hard all my life and I loved working. I ain’t whining about it, but I wasn’t a brain worker. My brain wasn’t that smart. Common sense. I had common sense a lot of folks ain’t got.”

Lovie was 82 at the time of our interview. A few years before she’d gotten lung cancer, but took full responsibility for it. “I liked cigarettes,” she said. “I ain’t gonna lie.” She didn’t beat cancer. She just sort of fussed at it until it went away. She had several good years after that and she lived to see her great grandchildren.

Lovie had been through a lot. She’d seen a lot. She’d lived to talk about it. I asked her some of life’s big questions.

I asked her, “What’s the happiest you’ve ever been in your life?”

I asked her, “What’s the most important thing in the world to you?”

“Freedom,” she said. “They ain’t nothing no better than being free to do things.”

She told me she wasn’t a religious person. I asked her, “Do you believe in God?”

Lovie said, “There’s something, somebody. Somebody put us here. Now who? I don’t know. I believe in something, but I can’t say what it is.”

I asked her, “Are you afraid to die?”

One of the things I loved about Lovie is she always spoke her mind. She was the most unpretentious person I’ve ever known, living simply and within her means.

Even if you didn’t agree with her, you always knew where you stood. I was proud to have known her.

To Lovie’s children, grandchildren and great grandchildren, you’re all blessed. You are the descendants of a strong woman. If you want to honor her legacy, live your life with as much honesty as she lived hers. I think that’s a good lesson for all of us, actually.

For those of you younguns in the room who didn’t have as much time with your great grandma as your parents, I wanted to tell you a story about Lovie. We were at the Christmas get together last year and some of you great grand babies were crawling around her feet on the living room floor. Some of you older ones were opening your presents and showing off your new toys.

Lovie sat there smiling as she watched you. She chuckled and said, “I love you lil ole younguns, whether you know it or not.”`

Epilogue: A year later, my wife and I are expecting our first child. In a deliberate attempt to annoy family members, we’ve decided we aren’t going to find out if it’s a boy or a girl. But if it’s a girl, we’re going to name it Lovie. In one of those coincidences that makes you go “hmm,” the child’s due date is March 2. Lovie’s birthday was March 3. If it is Lovie’s reincarnation, I imagine its first full sentence will be, “Dan, go get me a beer.”

Raymond, Lovie’s late husband, planted blueberry bushes decades ago in the woods near the family home in Alabama. The blueberries still grow.