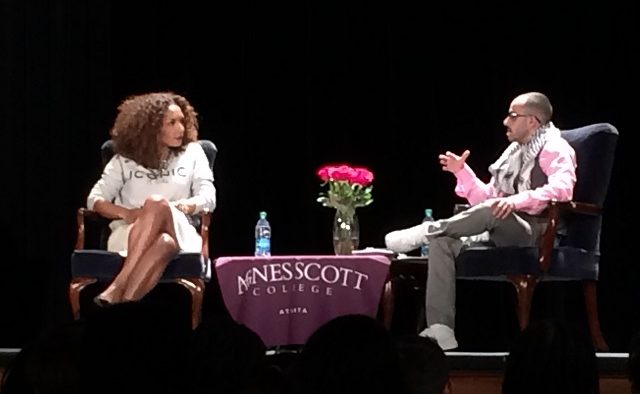 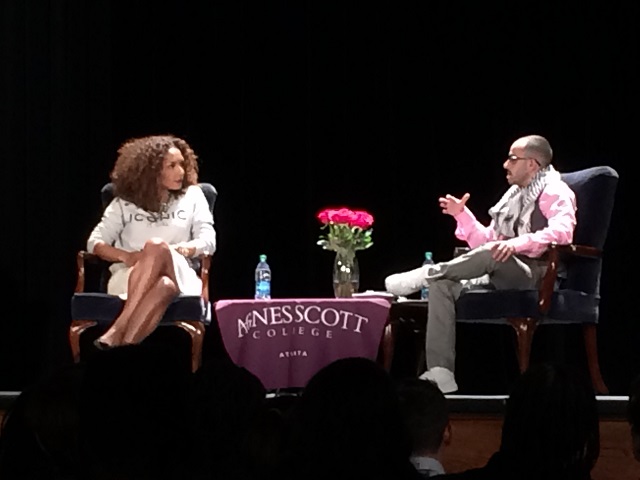 Mock and another transgender activist, T. J. Jourian, of the Brown Boi Project, talked about activism and leadership during the event.

Since revealing her status as a transgender woman in 2011, Mock has traveled the country advocating for the transgender community.

The journalist and former editor of “People” magazine published a book earlier this year, “Redefining Realness: My Path to Womanhood, Identity, Love and So Much More.” It made the New York Times Bestseller’s list.

She’s made multiple television appearances and has been profiled several times, including features in the New York Times and the Washington Post. She also had a notorious interview with CNN’s Piers Morgan earlier this year.

The crowd booed when Mock mentioned, “that interview with that man.”

Mock told Jourian that suicides by LGBT youth motivated her to reveal her story to the world.

“I didn’t grow up with that sense of isolation that can fill you with doubt,” she said. “I had mothers and sisters on the streets who helped me. I had someone else to bounce that off of. That’s why so much of my work focuses on placing these voices – our voices – at the center.”

Mock said the transgender community is “hyper-visible” right now, thanks to people like herself and “Orange is the New Black” actress Laverne Cox.

But that doesn’t mean all or even most trans-people are safe in their communities.

“You may see Laverne Cox on the cover of a magazine, but it took thousands of people getting beaten and killed just being who they are in order for us to see her on that cover,” she said.

“I don’t have any privilege to just assume ‘oh that space will be super safe for me and I am going to walk out alive.’ Outreach has to go beyond putting it on Facebook,” Mock said. “… How are trans-people going to get to the space? To make it safe for certain people you have to do a little bit more. And if you say ‘oh that’s too much’ then you’re not doing the work.”

Despite her high-profile position, Mock says she tries to remain grounded and pointed out that her experience is not common.

Mock said she isn’t entirely comfortable thinking of herself as a role model, although she frequently finds herself in that position.

“When you hear the horrific stories, when that little black trans girl is in front of your face crying, talking about how she made it through military school and her telling me what my presence means to her … I can’t tell her I’m not a role model,” Mock said. “But I don’t feel the term ‘role model.’ I like the idea of mirrors. I had mirrors of black women writers who allowed me to see myself certain ways. It’s a way that you can see yourself. I like to think I am part of a mirror for some women. … As a writer, that is where I feel most fulfilled.”

Twitter, YouTube and other forms of social media have been a source of inspiration and solidarity, Mock said.

“They become these new voices that allow me to learn on a daily basis,” she said. “I value them because they are creating a space to write their own truths without some editor telling them to soften it up. We can’t look to Hollywood to be our saviors and provide us mirrors. We need to create our own mirrors and our own portraits of ourselves.”

Jourian told Decaturish he was thrilled to share the stage with Mock.

“We need to create our own spaces and be the directors of our own stories,” he said. “I felt it was also important for us as two trans folks of color to have our own conversations, to connect and direct the dialogue the way we want it to be directed.”

“We really are a place that celebrates unity and diversity,” she said. “We don’t ever want to make decisions about how someone should express their gender or identify. So it’s really critical for us to continue to show the community who we are.”

While waiting in line to get her book signed, Carley, an Agnes Scott student, echoed the sentiment.

“I feel that, being at a women’s college, gender is something that is put on the back burner sometimes … but there are a lot of different identities here,” she said. “I feel like she’s really pushing us in a positive direction.”

Her friend and fellow student, Abigail, said that Mock’s honest and forthright personal account was an inspiration to her.

“She’s unapologetic, which I think is so important as an activist,” she said. “It’s something I aspire to be, is unapologetic. I feel like, as women, we’re so taught to not pushback and apologize for things that aren’t’ our fault. So she is a huge inspiration for me.”