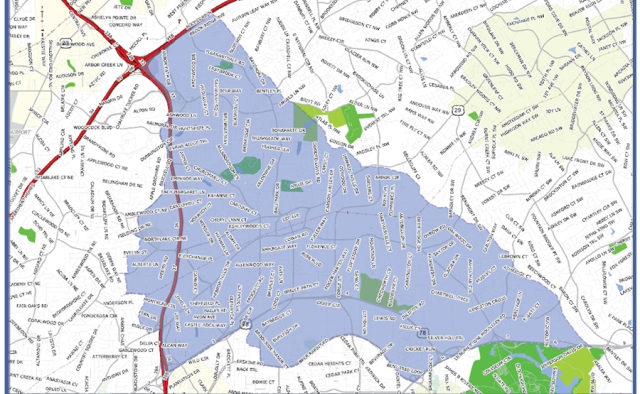 A map of the proposed city of Tucker, obtained via http://tucker2015.com/
Share

Supporters of creating a city of Tucker have released an official response to the proposed city of LaVista Hills, a city that would combine the maps of two previous cityhood efforts: Briarcliff and Lakeside.

“The map released (Monday) of the newly created proposed City of LaVista Hills clearly defines how difficult it was for Tucker 2015 to negotiate reasonable boundaries with Lakeside and Briarcliff that would create two healthy and sustainable cities in North/Central DeKalb,” the release from Tucker 2015 says. “For some Tucker residents and businesses, the cityhood process has been especially trying because they have been drawn in and out of an ever-changing map of a self-created city, throughout the more than year-long effort that has consumed our neighborhoods, while continuing to voice support to remain part of the Tucker community.”

The state Legislature set a Nov. 15 deadline for the three groups to work out a compromise.  While Briarcliff and Lakeside found a workable solution to their differences, they were unable to reach an agreement with Tucker. The House Governmental Affairs Committee is supposed to appoint a five-person panel to resolve the boundary dispute. So far there’s been no official word on who will serve on that panel.

“We believe that the State Legislative Leadership will bring about a solution that is fair and respectful of our long-recognized and welcoming Tucker community, a community that has thrived and worked together for more than a century, and that they will share our vision for a successful city that will benefit Tucker and surrounding areas for generations,” the Tucker 2015 release says.

While some elected officials have said Tucker did not submit a map, the supporters of that city said their map is unchanged from the one it proposed prior to the start of the most recent round of negotiations.