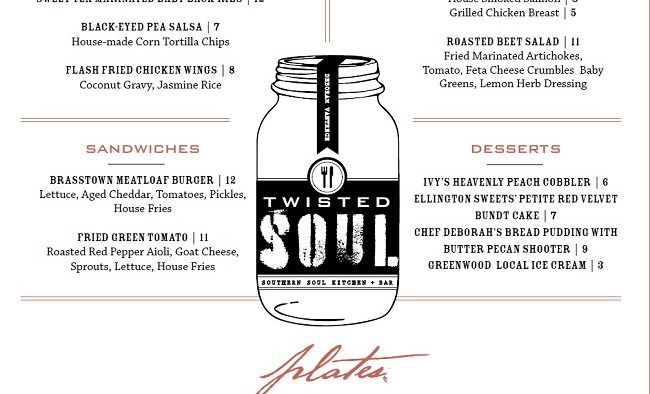 Twisted Soul has announced that it will officially open on Dec. 3, moving into the former MARBAR space at 314 East Howard Avenue.

The restaurant has also released its first official menu. Among the more intriguing items: Moonshine Mussels, an appetizer; Cocoa Crusted Rack of Lamb, a main course; Ivy’s Heavenly Peach Cobbler – “The best I’ve ever had in life,” chef Deborah VanTrece said – and the Mount ‘N Rita, a cocktail made with moonshine.

VanTrece, a local chef best known as the entrepreneur behind the Edible Art Cafe, recently told Decaturish that the menu, “Comes from a different place. It reflects my life. I was previously a flight attendant. My husband played basketball. I spent time in Israel. I got to meet people in their culture and eat in their home. It’s comfort food that I’ve been taught from people I’ve been met.”

According to a press release, “VanTrece will lead the kitchen, supported by select staff members who have been working with her since she opened Edible Art in 1998.” The restaurant closed in 2002, and VanTrece has operating a catering company for the last 12 years.

The restaurant will open for dinner service on Dec. 3. According to the press release, “In celebration of our opening week, they’ll be toasting their patrons with a glass of wine on the house, Dec. 3- 7.”

Check out the Twisted Soul menu: