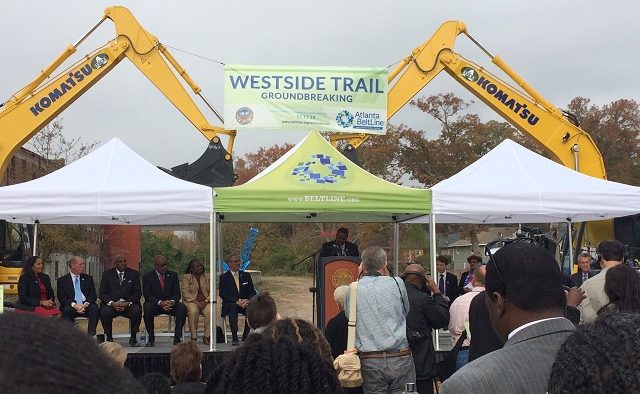 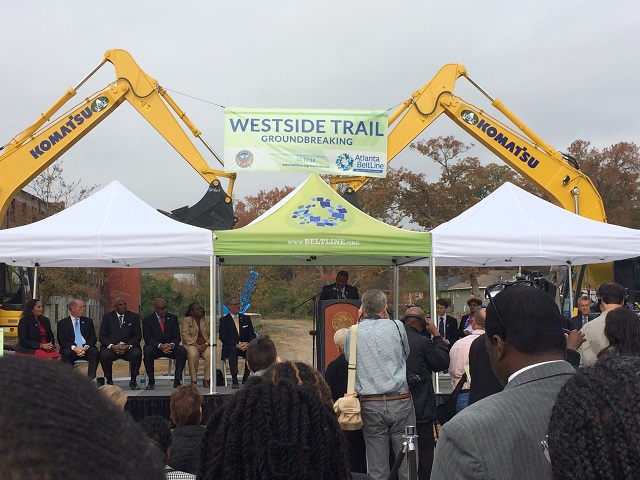 Construction on the Westside Trail officially started on Nov. 12. Photo by Kim Hutcherson

Construction for the Westside Trail kicked off with a ceremony held Nov.12, marking the first step toward the creation of a 3-mile corridor that will stretch to from Allene Avenue to Washington Park near the Ashby Marta Station.

Mayor Kasim Reed spoke to a crowd of at least two hundred residents, officials and community leaders. He said the project represents “an unprecedented investment in Atlanta’s west side.”

The new trail will run, in part, through City Council District 2, represented by Councilman Kwanza Hall, who participated in the ground-breaking.

“[The Westside Trail] is going to power families and communities to come together and be stronger,” he told Decaturish. “It’s going to connect people, connect schools, connect people to jobs … So just the fact that we’ve broken ground will encourage people to come out and visit.  Investment will come, I think jobs will be created, new restaurants, new shops and I think there’s going to be a higher quality of life.”

Construction should take about two years. Once complete, the Westside trail will intersect the existing Path trail at Washington Park, providing a direct connection to downtown for cyclists and pedestrians.

The project will cost $43 million dollars.

The majority of funds, $18 million dollars, comes from a TIGER V grant from the U.S. Department of Transportation. “Tiger” stands for Transportation Investment Generating Economic Recovery. The grants go to projects that promote safety, livability, economic competitiveness or environmental sustainability.

Another $15 million in funding came from state and local public funds, while the remaining $10 million came from private donations.

Reed and several other speakers remarked on the speed with which the Westside Trail went from the planning stages to construction. It can often take years for public-private partnerships to get through the design and regulatory process.

Atlanta Beltline and its partners were able to complete the process in nine months.

Beltline President and CEO Paul Morris called it “a remarkable public and private partnership at the local, state and national levels.”

The same security measures in place on the Eastside Trail will be available on the Westside, including security cameras, a visible police presence and coordination between law enforcement and local neighborhood watch groups.

Officials said the trial will reflect the communities that surround them.

“There is a unique, indigenous, local feel to this side of the trail, which is very different,” Hall said. “The way it came about, the way it came together, the people who are partners and stakeholders are not the same people on the northeast side of town. And rightfully so. It should reflect the character of the community.”

The Westside Trail will provide connections for four neighborhood schools and four parks and will have 14 different access points, 11 of which are ADA-accessible.

The trail will create 40-acres of green-space along its route. The Atlanta Beltline Arboretum will be plant hundreds of large, native trees that will serve as a “linear classroom.”

Other plans on the drawing board for properties around the Westside Trail include a new regional library, an urban farm and improvements to the State Farmer’s Market. The Beltline recently purchased the market, which abuts the tail.

According to Atlanta Beltline officials, $775 million has been spent on redevelopment within half a mile of the Eastside Trail.